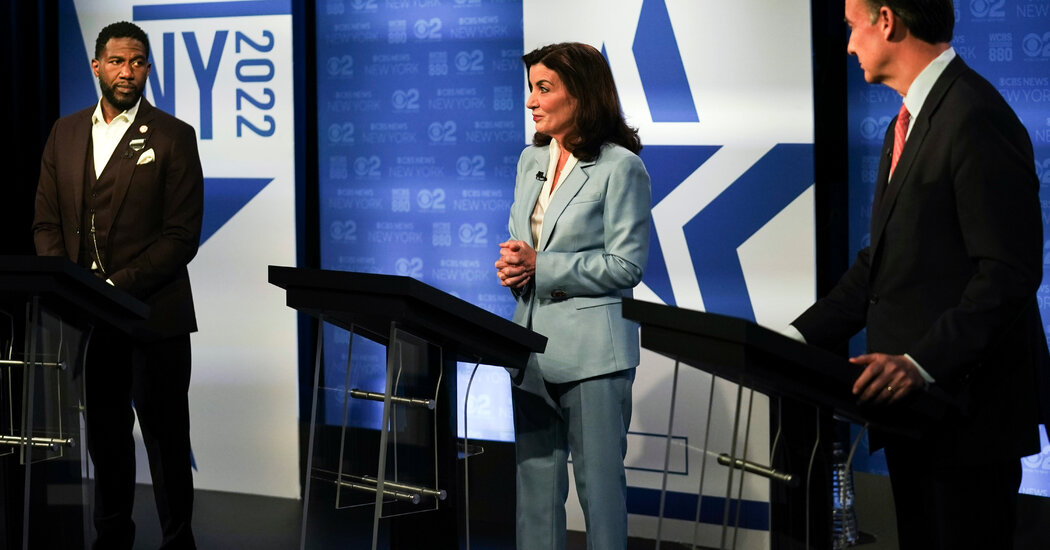 Gov. Kathy Hochul took center stage on Tuesday night, finally facing her Democratic challengers in a debate that mostly played out as expected.

Her rivals, Representative Thomas R. Suozzi of Long Island and Jumaane D. Williams, the New York City public advocate, attacked the governor at every opportunity, but failed to land an instantly memorable moment that could rattle the race.

Mr. Williams, a standard-bearer of the party’s left wing, brandished his populist message while casting himself as the candidate who felt New Yorkers’ pain, occasionally attempting to link Ms. Hochul to her predecessor, Andrew M. Cuomo.

Mr. Suozzi, a vocal centrist, reminded viewers of his years of experience in local government, and repeatedly sought opportunities to blame Ms. Hochul for failing to address crime, which he said was the most concerning issue for New Yorkers.

And Ms. Hochul strove to project the equanimity of a leader: cool under fire, and already at work tackling the state’s many pressing issues.

Ms. Hochul, who holds a commanding lead in public polls and in fund-raising, did not try to score points off her opponents, seeking mostly to leave the arena unscathed. In this, she emerged largely successful, taking the expected hits on her past support for gun rights and handling of the Buffalo Bills stadium deal, but holding her own under intense fire from the left and the right.

The moderators quizzed candidates on a smorgasbord of topics, from congestion pricing and secondhand marijuana smoke to whether they believed in ghosts (in a rare moment of consensus, all vouched for some form of life after death).

Here are some takeaways from the evening’s debate:

Candidates try out their messages on public safety

Ms. Hochul came into the debate ready for her opponents to attack her on crime, and the preparation paid off. She rattled off her projects — from the interstate gun task force, to violence disrupter programs, to the 10 gun bills she signed into law earlier in the week — that demonstrated the power of incumbency. And she took ownership over the tweaks to the state’s the bail laws that she had pushed for, describing in detail the way in which changes would provide judges discretion to consider a defendant’s dangerousness, by using a specific set of criteria.

“I think what we gave the judges is better than this vague term that can be subjective and many times used against the individual because of the color of their skin,” Ms. Hochul said.

Her response helped dilute the line of attack from Mr. Suozzi, who has placed crime at the center of his platform. He still insisted that the governor had done “nothing to fix bail reform.” He later stressed the need for a comprehensive mental health plan and argued that the police and social workers should be able to remove mentally ill people from the streets to get humane care and treatment.

Mr. Williams agreed that there was a need for mental health support, but said that the police need not be responding to mental health crises. In a personal moment, he described being nearly removed from a train because of his Tourette’s syndrome, saying that his experiences would position him best to tackle public safety and mental illness with humanity.

“These things are not theoretical to me,” he said. “It’s not just things I read about in the paper or see on TV. These are things that I’ve dealt with, my family’s dealt with, my constituents have dealt with.”

There was one glaring subject that Mr. Suozzi and Mr. Williams brought up repeatedly during the debate: the deal Ms. Hochul struck with the Buffalo Bills in late March to subsidize the construction of a new N.F.L. stadium using $850 million in state and local funds.

Ms. Hochul’s rivals sought to cast the deal — which some recent polls show could be unpopular among voters — as wasteful spending of taxpayer money at a time the state has other pressing needs.

The deal made for a digestible talking point that Ms. Hochul’s foes used to criticize her — not only for its large price tag, but also for the secretive nature of the negotiations that led to the deal.

Mr. Suozzi relentlessly pivoted to his attack lines on the Buffalo Bills, forcibly inserting the topic even when asked a question about abortion rights or about the prospect of a casino in Manhattan.

“When it came to the Buffalo Bills stadium, she got something done that nobody thought could be done,” Mr. Suozzi said. “It was the most lucrative deal in the history of the N.F.L.”

Mr. Williams accused Ms. Hochul of prioritizing the wealthy owners of the Buffalo Bills over investments in violence prevention programs or reducing inequality, saying “people are suffering” in Buffalo.

Ms. Hochul repeatedly defended the deal, which was aimed at ensuring that the football team did not abandon the state. She cited the construction jobs it would create and said it “was the best we could do for the taxpayers of New York.”

“Every part of the state has regional priorities,” she said. “The Buffalo Bills are the identity of western New York the way Broadway is to New York City. It’s part of who they are. I made sure that they’re going to stay there for the next 30 years.”

Hochul’s decade-old courtship of the N.R.A.

In 2012, Ms. Hochul won the backing of the National Rifle Association, an endorsement she was once very proud of but has since come to regret.

Still, neither the moderators nor her opponents were able to push Ms. Hochul to extrapolate beyond the position she’s taken in the past — namely that it was in the past, and that she previously represented a very conservative House district in Western New York.

“Where’s the principle in that?” Mr. Suozzi said of Ms. Hochul’s reference to political necessity. “I don’t understand that.”

“We are 10 years behind because people in Congress were doing the bidding of the N.R.A.,” Mr. Williams said.

Ms. Hochul says that she has evolved, and hopes that voters will judge her by her recent actions — like the gun safety legislation she signed into law — rather than past ones.

But if voters are looking to impose a purity test on guns, Mr. Suozzi suggested that Ms. Hochul would fail.

“All three of us up here support the gun legislation that’s been passed. It’s great. It’s wonderful. It’s fantastic,” Mr. Suozzi said at one point. “Only one of us standing up here has ever been endorsed by the N.R.A.”

Since taking office, Ms. Hochul has been adept at avoiding positions on some of the most divisive policy issues in Albany, whether to avoid creating a political maelstrom, alienating voters or disrupting her negotiations with legislative leaders.

She continued to thread that needle on Tuesday night, remaining noncommittal on a number of topics du jour.

She said she was still considering whether to sign a recently passed bill that would impose a two-year moratorium on cryptocurrency mining at fossil fuel plants, insisting that donations and support from the cryptocurrency industry would not influence her decision.

Asked whether the state should compensate families whose loved ones died in nursing homes during the pandemic, Ms. Hochul said it was something she was looking into, but that she would put together a blue ribbon commission to investigate the pandemic response in nursing homes. (Mr. Suozzi did not directly answer the question, while Mr. Williams said he supported compensation.)

In other instances, she leaned on a philosophy of governing she has emphasized before: her desire to empower and respect the autonomy of local governments.

She said, for example, that she respected New York City’s decision to allow people with green cards to vote in local elections, but would leave any expansion to localities. Mr. Suozzi said voting should be reserved for citizens, while Mr. Williams said noncitizens should be “civically engaged.”

Asked whether a casino should be built in Manhattan, Ms. Hochul, a Buffalo native, said she would not place her “finger on the scale,” and would be “open-minded” to different locations for a new casino in the downstate region, where they were not previously authorized.

Mr. Williams, who is from Brooklyn, said he wasn’t sure Manhattan would be the best place for a casino, while Mr. Suozzi said he was not opposed to it but emphasized the need for public hearings around such a decision.

When Ms. Hochul’s former lieutenant governor, Brian A. Benjamin, was arrested on federal bribery and fraud charges in April, many political analysts predicted that his arrest could upend and jeopardize the governor’s campaign and her comfortable lead in public polls.

Ms. Hochul had handpicked Mr. Benjamin, a former state senator from Harlem, as her lieutenant governor and running mate last year. But her team’s flawed vetting process of Mr. Benjamin overlooked, and failed to uncover, ethical red flags that eventually led to his arrest.

Ms. Hochul, however, has trudged on: She recently appointed Antonio Delgado, a former congressman from the Hudson Valley, as her new lieutenant governor, and successfully removed Mr. Benjamin’s name from the ballot.

On Tuesday night, Mr. Benjamin’s name, and the corruption scandal that led to his demise, barely registered, even if Mr. Suozzi sporadically sought to link his arrest to what he described as Ms. Hochul’s failure to fully clean up corruption in Albany.

“I promised the voters of New York and the people of the state that I would do everything I can to restore their faith in government,” she said. “That was a setback.”