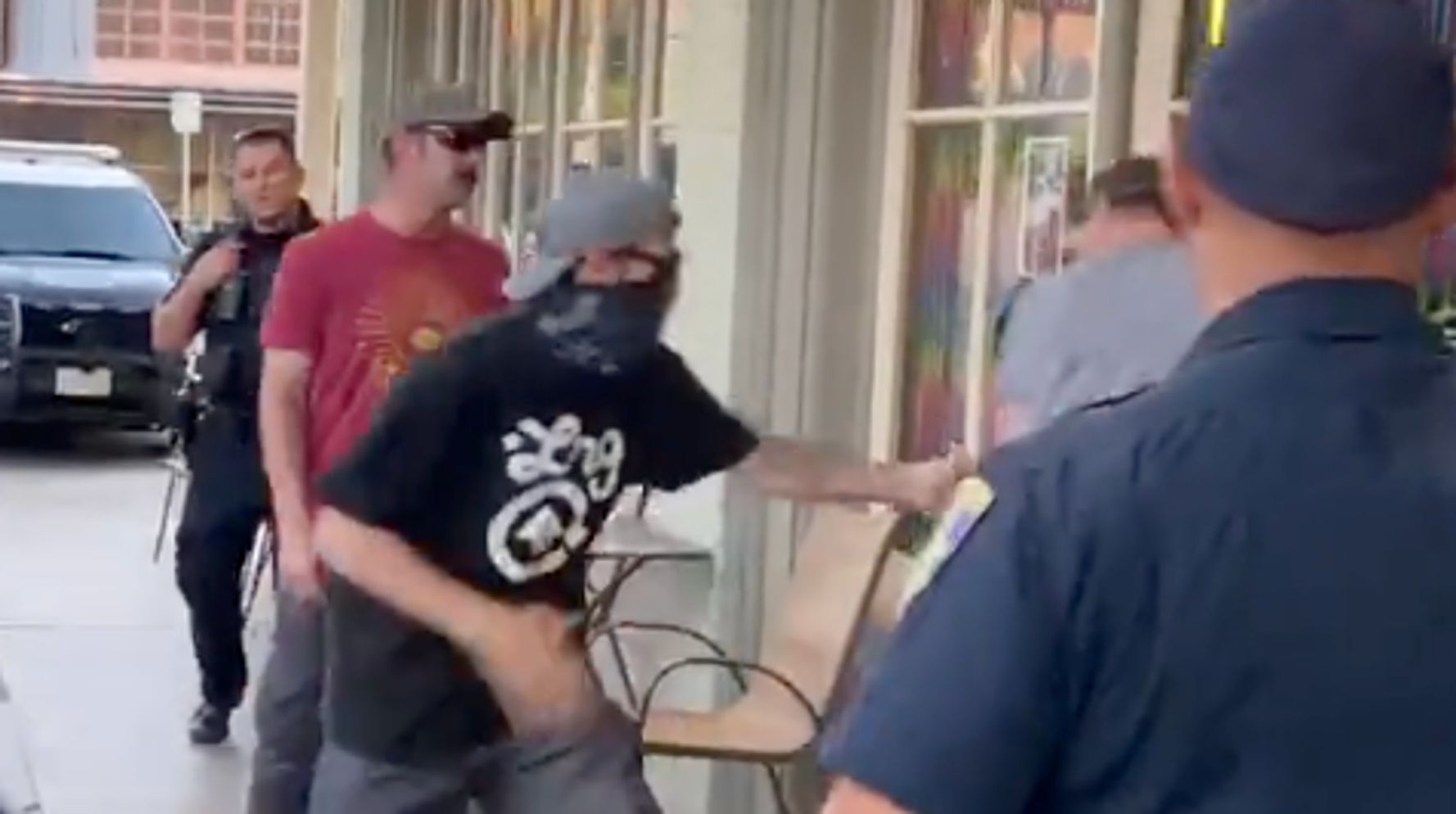 Dramatic video captured a handful of suspected Proud Boys getting pepper-sprayed in the face as they yelled slurs outside an LGBTQ bar in California.

The bar was hosting a drag show Thursday when about 10 people showed up to yell about “pedophiles” and harass bar operators and patrons at the door. One asked: “How many kids in there?”

That’s when the suspected Proud Boys were pepper-spayed full in the face. Some police officers standing by also appeared to be affected by the spray. Police said Thursday that they had not determined the source of the pepper spay.

Alleged Proud Boys members attempt to get into The Mojo in Woodland, CA and are met with pepper spray. The bar had planned an all ages Drag Show tonight, which was postponed due to security concerns pic.twitter.com/7Boln64uJ6

A larger version of the event at Mojo’s Lounge and Bar in Woodland, California, had been canceled after threats against the venue and performers were posted on social media. But after an outpouring of support from the community, organizers decided they would still host a scaled-down version, Sacramento’s KCRA News reported.

That’s when the suspected Proud Boys, some wearing bandanas to hide their faces, turned up.

“It was so good to see people so happy — and then to see the exact opposite, people were scared. People were angry. People were really upset,” Christy Hayes, owner of the bar, told KCRA. “This isn’t what we wanted.”

“There was an altercation,” Woodland Police Department Deputy Chief Anthony Cucchi said on the scene. “People were here, upset about the bar having their Pride event. We tried to intervene as quickly as we could. It was a pretty chaotic scene.”

Cucchi said an investigation is continuing and that police are attempting to determine if the suspected Proud Boys traveled from out of town to harass the bar and patrons.

LGBTQ people have increasingly been targeted by right-wing extremists, including the Proud Boys, in recent weeks.

A group of Proud Boys yelling “pedophiles” turned up last month in Frisco, Texas, for the first-ever community event marking Pride Month. But they were blocked by a “human shield” of Pride supporters.

Earlier last month, 10 Proud Boys disrupted a drag queen story hour at the San Lorenzo Public Library in California. One was wearing a “kill your local pedophile” shirt. The Almeda Sheriff’s Department has opened a hate crime probe into the confrontation.

Earlier this week, New Zealand declared the Proud Boys a terrorist organization. Canada named the group a “terrorist entity” just over a year ago.

NOW | This is Woodland, CA. A drag show was canceled after safety concerns but after enough people turned out, organizers held a scaled down version. Then this group showed up. [Warning: There’s explicit language in this video] @kcranews pic.twitter.com/KA8B0ceg7z