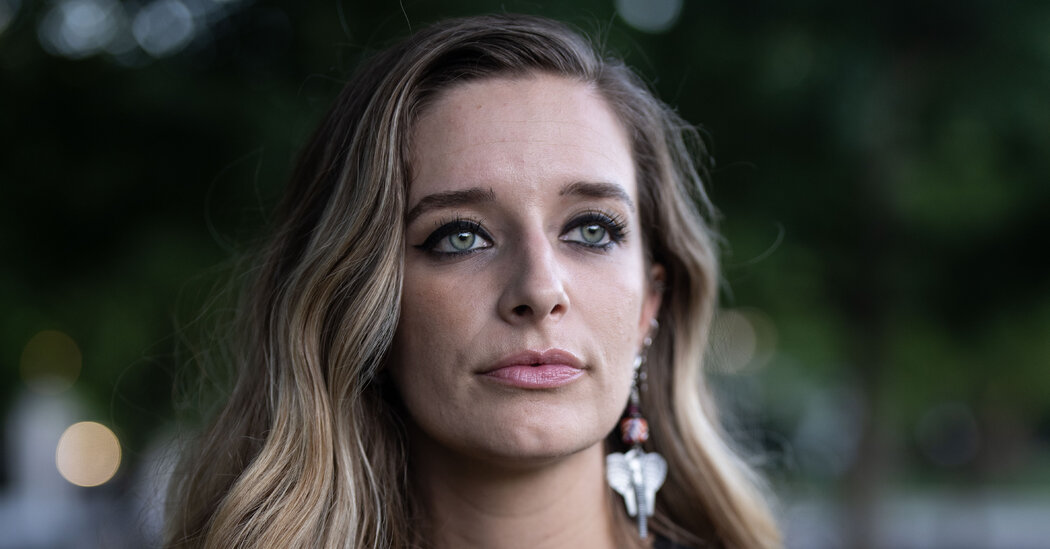 When Amber Escudero-Kontostathis, 28, drifts into a light sleep, she is frequently awakened by a feeling similar to a dream of falling, except the thing that jolts her is a glowing ball of light the size of a playground ball speeding toward her face.

She is not sure if it is a memory of being hit by lightning two weeks ago in a park near the White House or if her brain is trying to process the extraordinary circumstances of her survival.

Not only is she one of the few people in the United States to be struck by lightning this year, she is the only one of the four who survived after they were all struck at the same time on Aug. 4 in Lafayette Square in Washington. Her heartbeat stopped twice. The second time it did not resume for more than 10 minutes. Two nurses who helped her told her that they do not know how she survived.

Some might call her survival a miracle, but she credits the emergency medical workers and wonders why a “miracle thing” made space only for her.

“There was only one spot that day, and the fact that I have it is not fair,” she said. “I am not really comfortable being the one, but it’s the hand I was dealt, and I am grateful for it, and I am going to make sure I do not let those three people down. I carry them with me in thought and in action every day.”

The three who died were Donna Mueller, 75, and her husband, James Mueller, 76, of Janesville, Wis., and Brooks A. Lambertson, 29, of Los Angeles. The Muellers were retired and had been celebrating their 56th wedding anniversary. Mr. Lambertson, a vice president at City National Bank, had been in town for work.

The four had been in Lafayette Square, across Pennsylvania Avenue from the White House, around 6:50 p.m. when lightning struck in their “immediate vicinity,” officials said. Secret Service agents, United States Park Police officers and the two traveling nurses immediately started providing aid.

Ms. Escudero-Kontostathis, who lives in Washington, was in the park to ask people to make recurring donations to the International Rescue Committee, a nonprofit humanitarian group that aids people in crisis zones. She was about to leave for her birthday dinner at a nearby restaurant when lightning struck.

She said she didn’t have a heartbeat when emergency responders first arrived, but they were able to bring her back to life for about 12 minutes before her heartbeat stopped again for an estimated 11 to 13 minutes. The nurses later told her that her body had been gray from the stomach down, and the rest was purple.

She said it “blows her mind” that when she was out doing her job as a canvasser, asking people to help strangers experiencing the worst moments of their lives, that strangers ended up saving her life.

“It’s just people acting out of the goodness of their heart, without fear for themselves,” she said.

She’s desperate to get back to work for the International Rescue Committee but her doctors said that she needs rest. Still, they’ve let her start graduate school next week with a smaller course load than she had initially planned.

Her enthusiasm for work and school hides the fact that she is often in immense pain. Each day, she has to re-dress the burns on the left side of her body, which extend from the middle of her thigh to her torso and on to her arm and hand.

Her nerves are misfiring. Her foot will sometimes feel like it is bare in snow even though it is room temperature. On the worst days, she feels like there are “10,000 grains of salt moving through each pore at one time in my feet.”

At these moments, when she said she feels like she is going to die, she yells: “I’m grateful, I’m grateful.”

She said she learned years ago to focus on gratitude from the examples of her Aunt Melinda, who had recurring bouts of cancer for 12 years, and her Uncle Les, who had cancer for nine years. They both died from their illnesses, but during treatment they would always talk about how grateful they were to still be alive.

“I’ve always had that from them, but since this has happened to me, the part that I’ve learned is to just take on life without fear of failure,” she said.

“It’s very much real when I am feeling my nerve pain, when I am feeling my burns and when I feel this the jolt of the second slash third chance at life and energy to go live it full,” she said. “Those are all real, those don’t feel like removed things at all to me. But being struck by lightning, that itself — I don’t — it’s crazy.”

Ms. Escudero-Kontostathis said she barely has any memory of a seven-hour period from that day and has no idea how the four of them ended up near a tree during the storm. “I don’t even remember it raining,” she said.

After seeing a picture of the Muellers online, she remembered that they had exchanged tips about the best places to visit in Wisconsin and D.C. “They were just such wonderful, happy people and they just walked toward the White House and went on with the rest of their day,” she said.

She does not remember meeting Mr. Lambertson, though she has since learned that they had a mutual friend.

“I’ve been given these multiple chances of life again and that was not given to the others that fell victim to the lightning strike that day,” she said. “So, I feel that I owe myself, I owe everyone around me that’s helping me, but especially the three others that have passed, all of myself, every single day, to never hold back, to never get lazy or give up too easy or get down too quickly, to always make sure I am always getting back up and giving my all.”