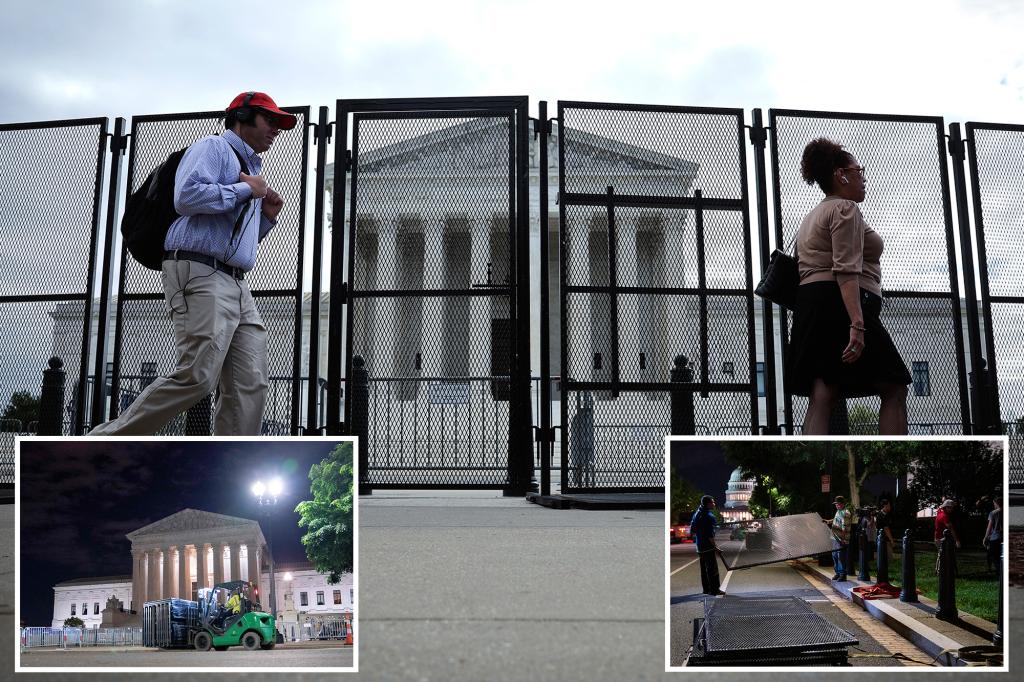 The Supreme Court has been protected with giant, non-scalable fences amid ongoing protests ahead of the expected dismissal of the landmark abortion ruling Roe v. Wade.

Regular bike-rack-style barricades first went up outside the Washington, DC legal institution on Monday after dueling protesters descended within minutes of the publication of a leaked draft opinion that suggested SCOTUS was poised to dismiss the 1973 decision that legalized abortion nationwide.

After three straight days of protests, workers were spotted late Wednesday erecting 8-feet non-scalable fences around the court, similar to the ring of steel set up after the Jan. 6 Capitol siege, Fox 5 said.

By Thursday morning, the Supreme Court was completely encircled in the high fencing, NBC Washington said.

Thousands of people have already rallied outside the court, with tense moments between large groups of vocal pro-choice and anti-abortion protesters.

Officials fear that the clashes will grow and become more heated once the final decision is published, expected soon.

The US Capitol Police confirmed to Fox 5 that the fence was part of multi-agency efforts to “prepare for any potential demonstrations in the area of the Supreme Court, including adding additional officers in the area.”

Chief Justice John Roberts on Tuesday confirmed that the leaked draft — published Monday night by Politico — was genuine, but stressed that “it does not represent a decision by the Court or the final position of any member on the issues in the case.”

He also ordered an investigation to find the leaker, calling it an “egregious breach of trust.”

“To the extent this betrayal of the confidences of the Court was intended to undermine the integrity of our operations, it will not succeed. The work of the Court will not be affected in any way,” he said.