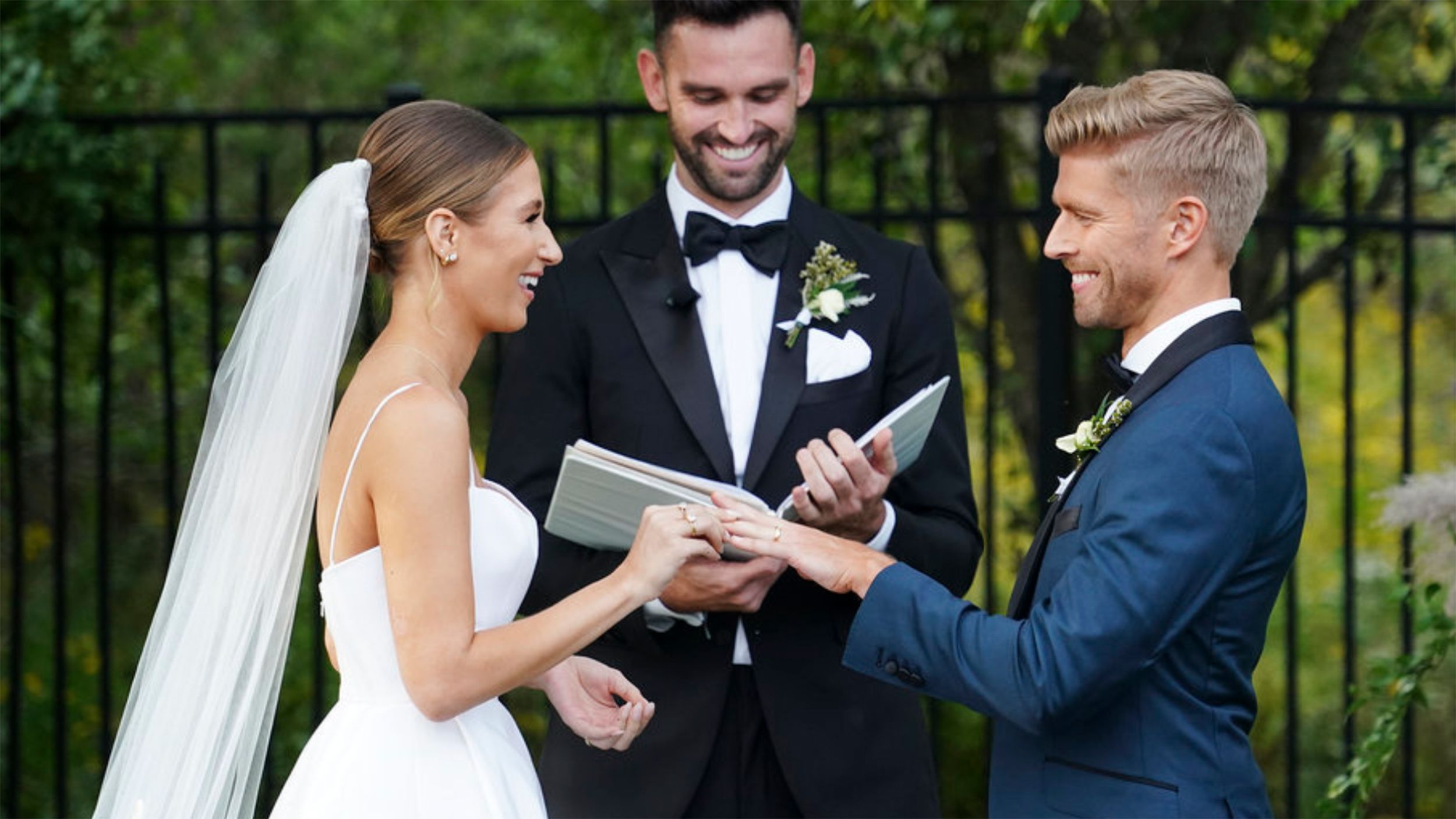 “Summer House” stars Kyle Cooke and Amanda Batula’s “will they or won’t they?” engagement drama spanned three seasons of the Bravo reality series — but finally, at the end of the show’s sixth season, they made it to the altar. Now married, the couple behind the canned cocktail brand Loverboy, which spun off a hugely successful merch line conceived of and designed by Batula, has settled into domestic bliss.

Cooke confesses that, due to their long engagement, married life isn’t that different. “Everyone always asks how married life is, and it doesn’t feel too, too different. I feel like the biggest adjustment that we ever made was moving in together,” he says. One thing that is new about married life is their stuff is a lot nicer now, because they have wedding gifts to enjoy.

The couple took a conservative approach to their wedding registry, setting up a honeyfund in favor of registering for a lot of physical goods. “We really tried to streamline the list, particularly because we have an apartment, but we also didn’t encourage people to buy things we don’t necessarily want or need,” Cooke says.

They chose to focus more on replacing basics like towels and flatware with nicer versions of what they already had. “Something I am glad we did,” Batula says, “was upgrade things that we have currently, instead of buying a bunch of additional stuff that you think you might need, like air fryers and blenders and this machine and that appliance.” Cooke was skeptical about the need to replace things they already had, but came around once the premium versions of everyday items started rolling in — and he started using them.

Batula says that now that they’re married, not cramming the registry full of stuff was the right choice for the couple’s life and lifestyle. “I’m glad we stuck with what we know we use every day,” Batula says, “and asked for nicer versions of them. Because that’s what we most use out of anything; things that were new or different, we just haven’t used as much.”

The couple, who were engaged for three years before finally tying the knot on September 25, 2021, shared their thoughts on the wedding gifts they’re finding the most useful, the most enjoyable — and the most surprising.

Batula says, without hesitation, that the Brooklinen duvet cover is her favorite of all the wedding gifts she and Cooke received, “I think it’s the most comfortable thing. It’s a beautiful color, it ties the bedroom together, and I just love going to bed in my bed — that’s my safe space. And they’re quite expensive! So for me, it’s definitely my favorite and most used item.”

For his part, Cooke says that the electric coffee grinder the couple registered for is his favorite item. “I know it sounds ridiculous,” he says of the $300 appliance. “I’ve had a cheap $50 grinder my whole life and if it wasn’t for the registry, I don’t know if I would feel like I could splurge on something like that.” Batula, who typically doesn’t like having a lot of items out on the kitchen countertops, says she approves of Cooke’s grinder. “It’s almost like a statement piece.”

The couple also registered for an electric kettle in the same style as the grinder, which they use when making pour-over coffee — and in a surprising way. “Honestly,” Batula says, “the thing we use the tea kettle for most is getting stains out of clothing.”

One registry regret Batula has is the lack of cookware she included. “I wish I did register for a matching set,” she says. One piece she did make sure to put on the registry was a cast-iron skillet. “Cooke used to cook with a cast-iron skillet all the time when we were dating, and I thought it would be the perfect thing to add on the registry because it was his roommate’s.” Great thinking, but Batula confesses that since they’ve been married, “he hasn’t pulled it out to use it.”

A lack of time for cooking and entertaining is a recurring theme for the newlyweds. “We used to make a lot more homemade pizza,” Batula says, but with their busy schedules the pizza stone the couple registered for sees more use in reheating takeout. “When you have a Joe’s Pizza literally on your block,” Cooke says, “it’s tough to think your homemade pizza is going to top that.” Batula chimes in, “we will make homemade pizza one day and use that stone,” she says, laughing.

“We definitely give the appearance that we’re highly, highly social,” Cooke says, “but even now that we’re out of lockdown, we’re still kind of locked down because of work.” While the couple isn’t doing much at-home entertaining at the moment, they’re still making good use of the serving pieces they registered for. “Sometimes we’ll just make a really nice spread for the two of us,” Batula says, “And we’ll sit down on the couch and watch a movie and just eat cheese and crackers and meats for dinner.”

Batula says that the wooden salad bowl and serving board the couple registered for get a lot of daily use. “Honestly, they’re for us. Something that I love to do is just try and make different salads, which is why I wanted the bowl,” Batula says, “it just feels a little more special when you serve it.”

Batula says she’s surprised by how much she loves her John Boos walnut cutting board. “It feels like such a basic, staple thing. But this one is so pretty, we have it set up right next to the stove on the counter so we use it all the time. I used to forget to take a cutting board out and with this, I’m using it constantly to cut things I wouldn’t normally think to do, which definitely helps our knives last longer.”

“The wine glasses that we chose are probably one of my favorite things that we got,” Batula says. “I wanted something that looked kind of modern and cool, but still had a traditional feel to it — something that wouldn’t be outdated super quick.” The couple uses the red wine glasses, which are large enough to hold a lot of ice, to serve Loverboy’s ready-to-drink canned cocktails and spritzes in a way that Batula says, “makes them feel so much more legit.”

“We will load up one of our wine glasses, which has that cool shape to it, with ice,” Cooke says, to mimic the way popular drinks like the aperol spritz are served in bars and restaurants. “And add a little garnish so it feels like you made yourself a cocktail,” Batula says, “instead of drinking it from the can.”

While Batula is smitten with their wine glasses, Cooke is mad about the smoked glass tumblers the couple received. “I actually love the tumblers,” he says. “You know when you go to a restaurant and you’re like, ‘Man, like not only is this cocktail great, but it’s in such a cool glass’? These have a nice weight to them, and they’re smoked.” The Loverboy founder uses them to make a cocktail made by combining the mango-peach spritz with mezcal, or to serve the brand’s espresso martinis. “To Amanda’s point,” Cooke says, “it makes it feel like a little more of a moment or a little sipping occasion.”

When the couple moved in together shortly after their engagement, they deliberately didn’t invest in expensive home goods, knowing they’d be registering for basics like dishes and flatware. “We purposely bought the cheapest of the cheap when we moved in, because we were engaged,” Cooke says. Now that they have this flatware set, they’re so happy with the upgrade, “it’s kind of nice to hold a piece that’s noticeably heavier.”

“Something that I put on the registry that I absolutely love more than I thought I was going to was the canisters,” Batula says. “I bought them for, like, decoration.” But she found them to be incredibly useful, in addition to being decorative. “I use the big ones for dog food and dog treats. I use one of them for garlic — I found uses for them. And I use them all the time, and I wasn’t expecting that.”

$60 at Brooklinen or Zola

For Cooke, new bath towels were a surprising luxury he didn’t know he needed. “I’d been using the same white towels since business school and they have a couple rips, but you know, they still dried me,” Cooke says to explain his surprise at how much he’s enjoying the bath towels he and Batula registered for. “I just felt bad throwing a perfectly good towel out, even though it had a couple of rips in it, but those are a nice pleasant surprise that I look forward to every morning.”