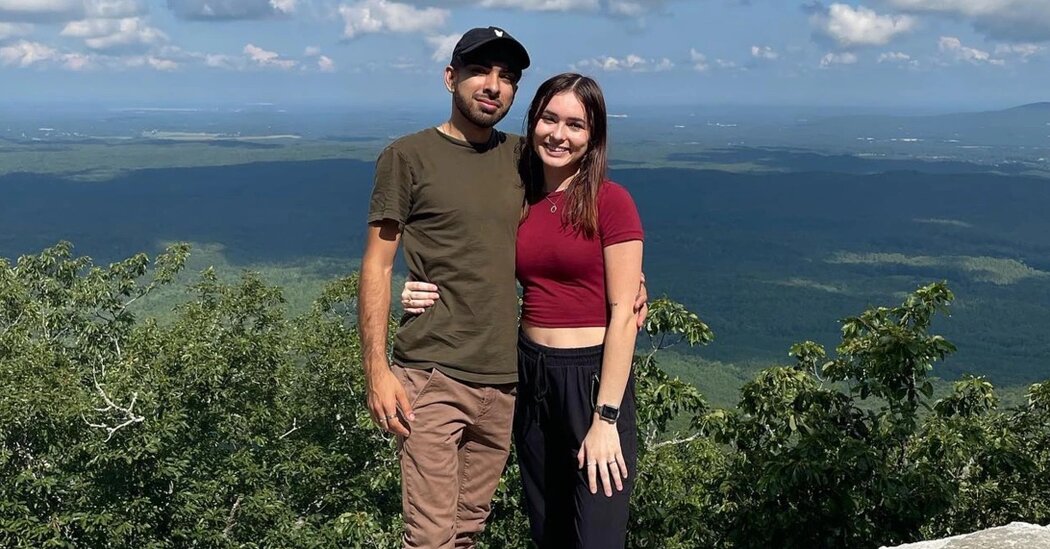 A 22-year-old man was fatally shot in a national forest in Alabama last week by a woman pretending to be a stranded driver after the man and his girlfriend pulled over to help, the authorities said.

The man, Adam Simjee, and his girlfriend, Mikayla Paulus, both students at the University of Central Florida, were driving in Talladega National Forest, about 80 miles east of Birmingham, on the morning of Aug. 14 when they were flagged down by a woman claiming her car would not start, according to a statement from the Clay County Sheriff’s Office posted by television station WBRC.

The woman, Yasmine Hider, pulled out a gun and made the couple walk back into the woods, according to the statement. Mr. Simjee then pulled out his own gun, leading to an “exchange of gunfire” in which Ms. Hider was shot several times in the torso and Mr. Simjee was shot in the back, the statement said.

Ms. Paulus, 20, who was not injured, tried to revive her boyfriend by administering CPR but he died at the scene, the authorities said.

Ms. Hider was transported to a Birmingham hospital where she had surgery for her injuries. The authorities said she may be part of a group of people “living off the grid” in tents in the national forest who were reported to be “armed and potentially violent.”

The sheriff’s office said Ms. Hider faces charges that include one count of murder, two counts of kidnapping and two counts of robbery.

Ms. Paulus told the authorities that at the time of the shooting, a second woman, later identified as Krystal Diane Pinkins, 36, had been standing in the woods.

Ms. Hider, the assailant, had called out to Ms. Pinkins to help her but she fled, according to officials. It was at this point that Ms. Paulus was able to get her phone and call 911, the statement said.

A tracking team from the Alabama Department of Corrections found what the authorities described as a “base camp” about half a mile from the scene of the shooting where they said they found Ms. Pinkins near a group of tents.

As officers ordered her to the ground, “a 5-year-old child ran from the woods holding a loaded shotgun,” the sheriff’s office statement said. The officers instructed the child, later identified as Ms. Pinkins’s son, to put down the shotgun but he kept going toward his mother before eventually putting it on the ground, officials said.

Ms. Pinkins was charged with one count of murder, two counts of kidnapping, two counts of robbery as well as endangering the welfare of a child. She remains in the Clay County Jail, according to sheriff’s records. Her son was taken into state care.

On Wednesday, David Law, a Clay County district court judge, ordered those involved in the case, including lawyers, witnesses, law enforcement personnel and “anyone else affiliated” with the case, not to discuss it because it could affect Ms. Pinkins’s right to a fair trial.

Ms. Paulus, Mr. Simjee’s girlfriend, cited the order on Facebook on Thursday. She said she and Mr. Simjee’s family wanted “an unbiased jury pool so that we can get the justice we deserve for losing the best man in our lives.”

In another post on Saturday, Ms. Paulus said that the family had laid Mr. Simjee to rest.

“I have no doubts I’ll see him in the next lifetime. He was my soulmate and will always be,” Ms. Paulus wrote. “Rest in peace baby.”