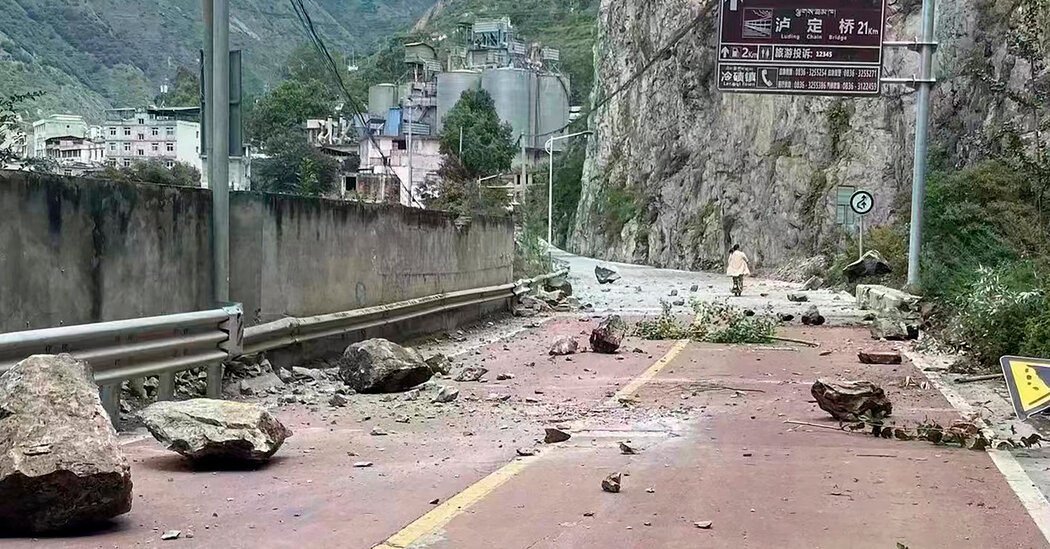 BEIJING — A strong earthquake shook a mountainous, steep-sloped area in southwestern China shortly after noon on Monday, and China’s state television said more than 30 people had been killed and another 30 or more injured.

The full extent of the damage remained unclear at nightfall, however, as the quake damaged communications in the remote, isolated region. In a sign that damage might be heavy, Xi Jinping, China’s leader, personally ordered that the government “spare no effort to rescue the affected people,” state television announced Monday evening.

The China Earthquakes Networks Center initially estimated the earthquake as having a magnitude of 6.6, but it later revised that upward to 6.8. The epicenter was fairly shallow — about 10 miles below the Earth’s surface — and shallow earthquakes often produce more damage than those far underground.

The epicenter was in Luding County, a remote area with many ethnic Tibetans in the southwestern corner of Sichuan Province, close to that province’s borders with Tibet to the west and Yunnan Province to the south. The U.S. Geological Service gave the precise location of the epicenter as several miles east of the Dadu River, which runs through a series of rapids and past small towns in a steep-flanked valley.

Satellite maps indicate a topography somewhat similar to the area of northern Sichuan Province where a much more powerful earthquake struck less than three months before the 2008 Summer Olympics in Beijing. The earlier earthquake, with a magnitude of 7.9, killed at least 69,000 people, including thousands of children who died when their schools collapsed.

Many landslides blocked steep mountain valleys and roads during the earlier earthquake. Relief workers needed several days to reach some communities where people had been buried alive.

The Chinese Army dropped 15 paratroopers into one isolated area, but deaths and injuries among these troops as they fell into dense trees prompted the government to refrain from further such efforts. Those difficulties helped persuade China to undertake a large program to import helicopters and to start building many more of its own helicopters.

The earthquake on Monday is the latest in a series of troubles to afflict Sichuan Province in the past month. Local authorities locked down the province’s huge capital, Chengdu, with 21 million people, last Thursday in an attempt to control a Covid-19 outbreak.

From late June to late August the province also endured its worst heat wave on record, and the usual summer rains failed to arrive. A severe drought not only parched farms but left so little water in rivers that the province’s huge hydroelectric dams could not generate nearly as much electricity as usual.

That led to the closure of many factories for nearly two weeks in late August, as well as blackouts that left residents without electricity for air conditioning as temperatures repeatedly soared past 100 degrees. Some rain finally reached the province last week, but not enough to end the drought.