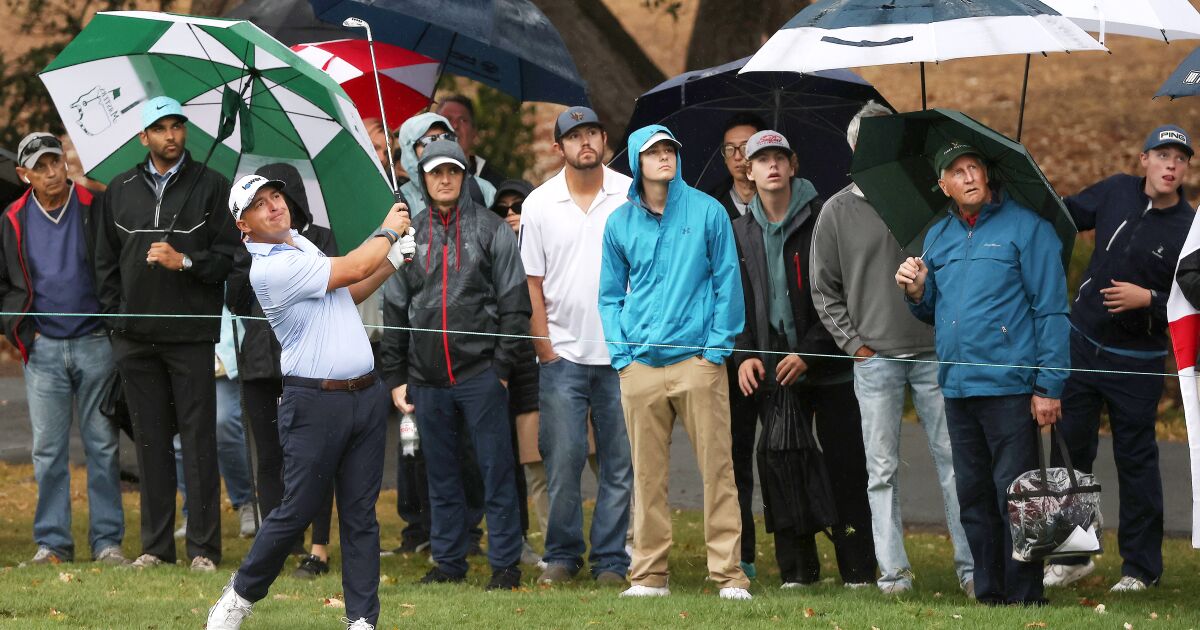 A storm system from Northern California will continue to bring rain to parts of Southern California on Monday, but Los Angeles is likely to remain dry, forecasters said.

Rain is likely to continue falling over the same cities, said David Sweet, a meteorologist with the National Weather Service in Oxnard. A slow-moving, frontal system is essentially stalled over the area, sustaining moisture levels and leading to rainfall.

“We are expecting it to sit there all day and not really move,” Sweet said, adding that it will eventually weaken and dissipate. It is not expected to move farther east than Santa Barbara.

The National Weather Service predicts rainfall totals to range from around half an inch up to 1½ inches for the Central Coast and nearby valleys, and at least 2 inches for the San Luis Obispo coastal hills through Tuesday.

Los Angeles has a 20% chance of seeing rain, Sweet said. There are “no surprises here,” Sweet added, though it is early in the season for rain.

The rain stems from a low-lying storm system slowly moving down the California coast, forecasters said.

Rain kicked off the week in the Bay Area, with wet conditions starting Sunday and more rain showers and possible thunderstorms in the forecast through Monday, and scattered showers could last through Wednesday.

“We just have an unusual deep low coming through that is providing some rain,” said Matt Mehly, lead meteorologist for the National Weather Service in the San Francisco Bay Area.

There were a variety of rainfall totals across the area, though the mountains received the most rain, with the North Bay coastal mountains get 2 to 3½ inches, the Santa Cruz Mountains accumulating as much as 2.2 inches, and nearly 4 inches in Mining Ridge in the Central Coast mountains.

High winds and wind advisories led to fears of possible blackouts Sunday. According to forecasters, there was some flooding along highways and hazardous local road conditions, including downed trees. There were no weather advisories in effect Monday.

September is typically the third driest month in California, according to the National Weather Service in the Bay Area. Still, Mehly said the rain is a relief. “We had the historic heat wave, with numerous wildfires, so that rainfall is a welcome sight [statewide] to slow the fires,” Mehly said. “It’s not going to end it, but it is a step in the right direction.”

Rain showers brought welcome moisture to the Mosquito fire, the state’s largest fire this year, and aided in the firefighting effort. As of Sunday evening, the fire had charred 76,290 acres in El Dorado and Placer counties and was 38% contained — up from 20% on Saturday, according to the California Department of Forestry and Fire Protection.

The rain also increased risk of mudflows and floods. A flash flood watch will be in effect for the burn area of the Mosquito fire until 12 a.m. on Wednesday.