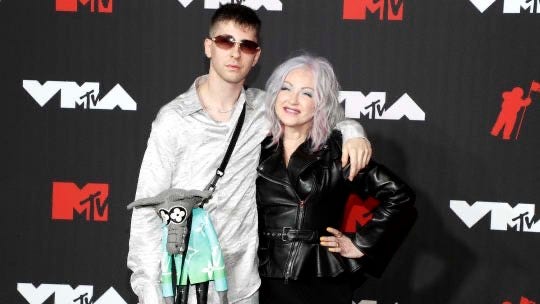 Singer and actress Cyndi Lauper’s son, Declyn “Dex” Thornton Lauper, was arrested this week on a stolen vehicle charge after police spotted him in the driver’s seat of a car in New York that had previously been reported stolen.

The 24-year-old was arrested around 1:40 a.m. Thursday after NYPD noticed a 2014 Mercedes-Benz illegally double-parked at the corner of West 140th Street and Broadway, police said.

Police used a computer check to determine that the vehicle was stolen.

The car was reported stolen two years ago and the plates were registered to a different vehicle, TMZ reported. Declyn Lauper is charged with a felony count of unauthorized use of a vehicle.

Declyn Lauper was arrested on a stolen vehicle charge at around 1:40 a.m. Thursday.

He was released with a desk appearance ticket for a future court date, the Manhattan District Attorney’s office said, according to the New York Post.

Declyn Lauper was arrested on a felony count of unauthorized use of a vehicle.

Declyn is a rapper who has collaborated with G-Easy. He is also an actor whose works include appearing in the animated series, “Bob’s Burgers.”

He is the only child to Cyndi Lauper and her husband, actor David Thornton.

Police had noticed the vehicle Declyn was in was illegally double parked.

The family starred together in the one season of the reality TV series, “Cyndi Lauper: Still So Unusual,” which aired in 2013.