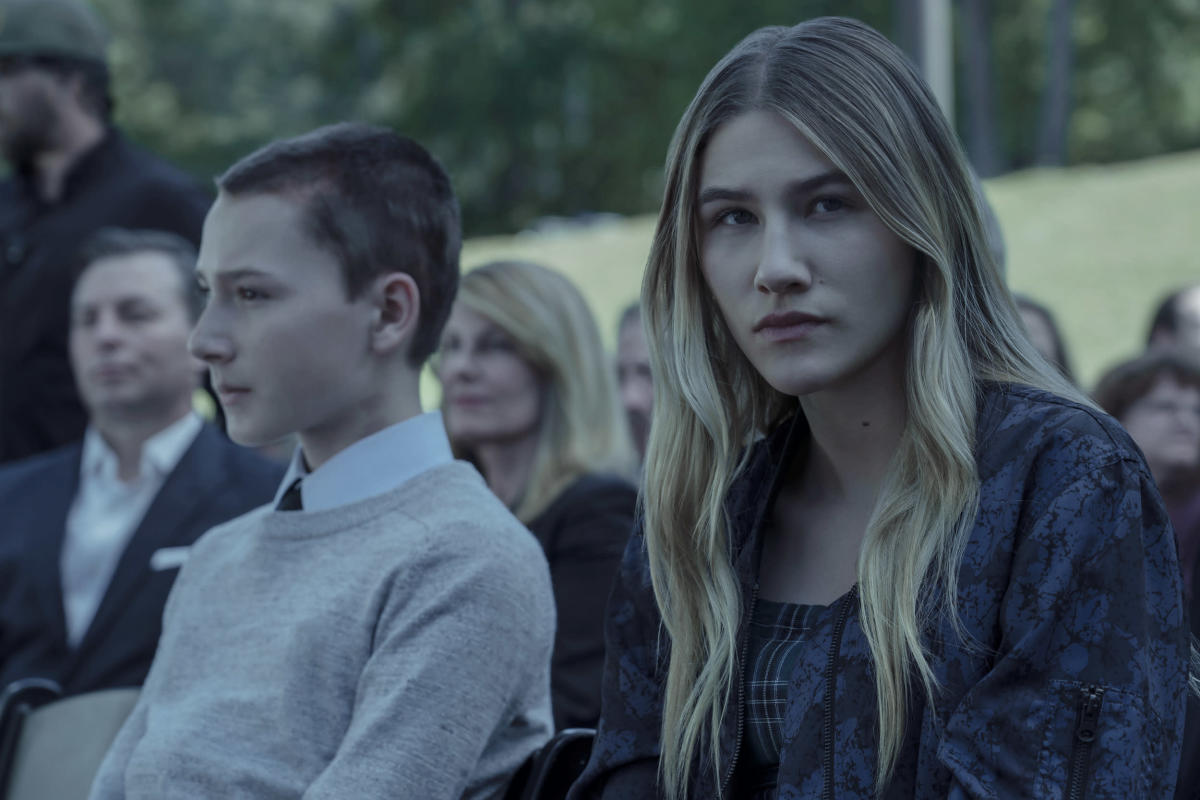 This post contains spoilers for the series finale of ‘Ozark.’

As the rest of the world watches the end of “Ozark,” whose final season premiered on April 29, Sofia Hublitz has been going back to early seasons.

Hublitz, 22, began playing Charlotte Byrde, the eldest child of Marty (Jason Bateman) and Wendy (Laura Linney) Byrde, when she was 17.

Her character, Charlotte, begins the show a typical teenager, complaining about her dad not giving her $10 for a fundraiser. She ends the show a cold adult, hardened by exposure to her parents’ criminal activity.

It’s quite a transformation — one rivaled only by Charlotte’s younger brother, Jonah (Skylar Gaertner), who quite literally grew up in front of the camera. And in the series finale, it’s Jonah who fires the shot that saves his family, and cements what many audiences suspected by then: The Byrde children’s moral compasses have been replaced by the same self-preservation that fuels their parents.

Still, despite Charlotte’s transformation, Hublitz says her personal journey has been even more significant, thanks to the show. “Me, me, 100% me,” Hublitz, 22, told TODAY when asked whether she or Charlotte grew more since “Ozark” started filming.

That’s why Hublitz has been going back to previous episodes, to see how her own life can be mapped out onto the show’s events.

“I’ll be like, ‘Oh, God, that was when I was in that relationship, or that was when I was graduating from high school. But I went to work and I did the scenes, and I’m proud of it,” Hublitz said. “It brought back some hard times. It’s more endearing to watch than it is painful.”

“It’s hard for me to earnestly watch something I’m in. I go back because I’m brought back to all those memories we made together as a family, the crew and the cast,” she said.

She is especially grateful to her on-screen parents Linney and Bateman. “They always treated me like a peer, even when I was 17 and starting the show. They were always so inclusive and collaborative. I’ll carry that through the rest of career. I’m grateful to them for showing what true kindness and professionalism looks like on a big set,” Hublitz said.

But as with high school, even as it was going on, Hublitz always knew “Ozark” was going to end. This high-octane thriller never had the makings to go on for seasons and seasons, like a rambling sitcom.

The Byrde’s shenanigans and crises in “Ozark” could only last so long. Even the Marty and Wendy were desperate for an ending to the madness; relief from their money laundering schemes; dealings with the Navarro Cartel, working with the FBI.

And in Season Four, the Byrdes got their off-ramp at last. The finale has been controversial online, largely because of how it disposed of a fan-favorite character.

Ruth Langmore (Julia Garner) was an Ozark native immersed in a family of petty crime and a Marty Byrde protege — which ultimately led to her undoing. Exposure to the Byrdes gave Ruth wealth beyond her imagining, but it took away her sanity and support system.

After she shoots Javi (Alfonso Herrera), the drug lord who killed her beloved cousin, Wyatt, Javi’s mom Camila (Verónica Falcón) coldly kills Ruth in the last episode, continuing the show’s “eye for an eye” math in an ouroboros of violence.

According to Hublitz, the ending couldn’t have been more perfect. “I was very happy and very satisfied with the ending. I like it that it’s not a happy ending,” Hublitz said.

Hublitz had a spoiler-filled conversation with creator Chris Mundy eight months before filming began in which he laid out everything that was going to happen.

At first, part of Hublitz was hoping the Byrdes would escape to Australia, like Wendy had been planning in earlier seasons. Instead, the family stays in America — free from their entanglements with the cartel, the consequences of their actions and more powerful than ever.

“They win in the end, but the cycle continues. It’s just one more body for them. Hopefully it’s the last one, but you don’t know that,” Hublitz said. “It leaves the door open for what’s going to happen next.”

Hublitz, who considers Julia Garner a close friend, also briefly spoke to Garner about her character’s ending, but didn’t dwell. To both actors, her demise seemed “appropriate.”

“It was kind of expecting and fitting that (Ruth) died. It seemed very appropriate, in both of our opinions. I remember both of our conversations, ‘Oh, yes. That makes sense that Ruth dies.’ She signed her own death warrant after she murdered Javi,” Hublitz said.

Still, as a viewer, Hublitz wasn’t immune to the melancholy of Ruth’s death. “It was surprising, because you want to root for Ruth. You want her to make it over the Byrdes. (In a way), she does succeed, but she dies. There’s a sadness in that,” Hublitz said.

As for what comes next for Charlotte? Hublitz sometimes wonders.

“It could go either way. She either goes to college and gets some sort of corporate finance job and stays aligned with the family business. Or she moves to Bushwick with 25 other roommates and works at a coffee shop until she’s 35,” she said.

But she’ll never find out. Amid the inevitable talk of spinoffs, Hublitz is happy to let Charlotte rest in Season Four.

“I think how Chris Mundy chose to end (“Ozark”) was beautiful and perfect. And that shouldn’t be messed with. I think it should live there in that space forever,” she said.

Plus, it’s not really even goodbye. Even though the show is finished, Hublitz said the bonds aren’t going anywhere. “There are no goodbyes with this one because we’re so close. We’re going to be in each other’s lives forever,” she said.

Up next? Hublitz would like to do a slapstick comedy — “a big, raucous comedy movie.” Consider it the “Ozark” antidote.