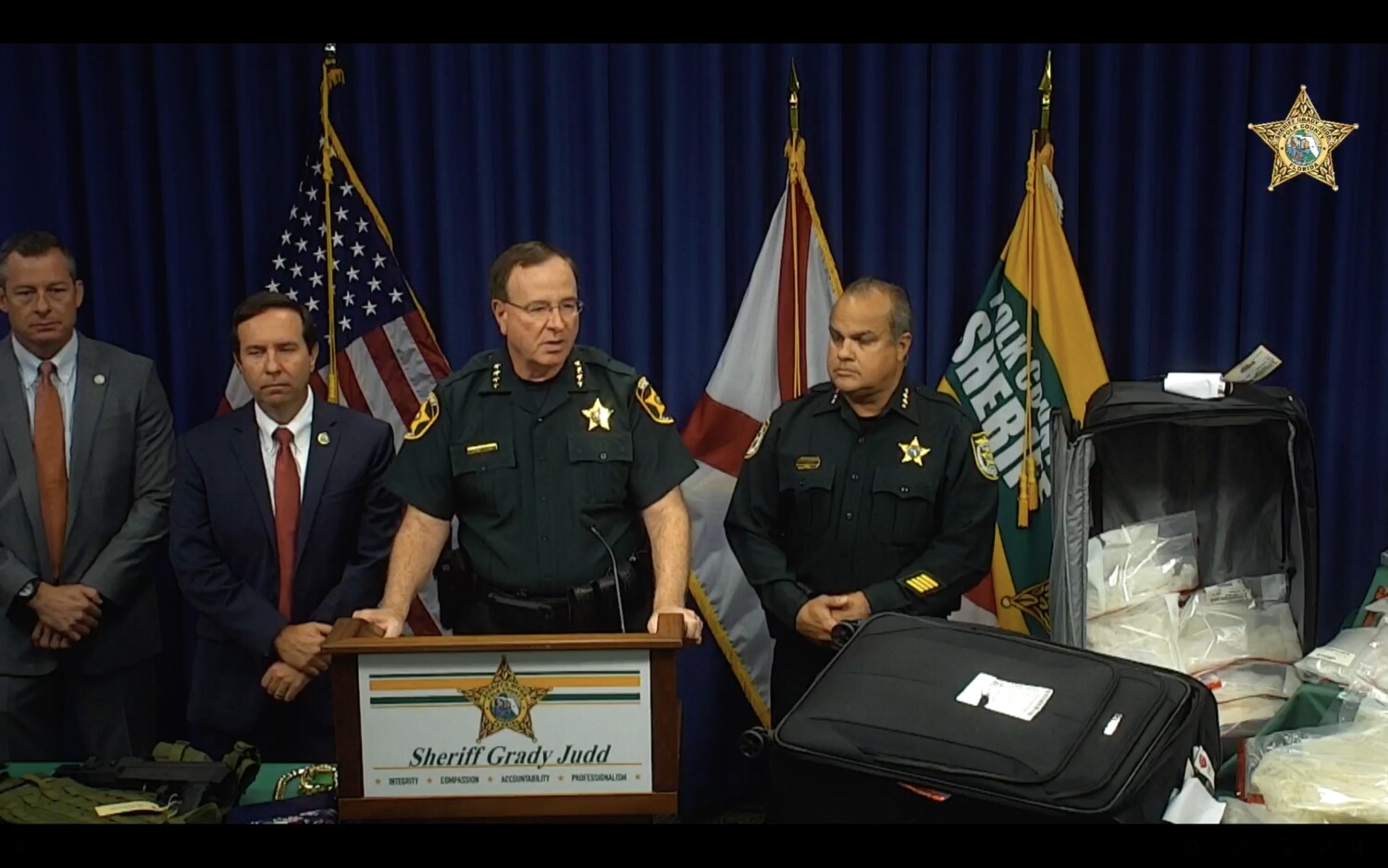 They were loaded onto flights from California to Florida, suitcases packed full of drugs including methamphetamine, cocaine and fentanyl.

For two years, authorities from more than a dozen agencies in Florida, California and the federal government surveilled the drug ring, using wiretaps and undercover buys to build a case that led to the single largest seizure of drugs and arrests in the history of Polk County, Fla., Sheriff Grady Judd said Friday.

The investigation, dubbed Operation Flying Ice, netted 85 arrests and led to 355 felony charges and 93 misdemeanors, the Polk County Sheriff’s Office said. Authorities estimate the total street value of the drugs seized to be more than $12.8 million.

Judd spoke about the effort during a Friday news conference in which he railed against classifying drug offenses as low-level and nonviolent.

The sheriff also called out Los Angeles International Airport. On one occasion, a flight had six suitcases filled with 94 pounds of methamphetamine and 48 pounds of cannabis arrive in Orlando from L.A., he said.

“They didn’t so much as throw a pair on underwear in the suitcase to act like they were hiding the drugs,” Judd said. “You think LAX has got a drug smuggling problem at the airport? I believe that they do and they need to address it ASAP.”

Heath Montgomery, an LAX spokesperson, said the Transportation Security Administration is responsible for screening baggage and referred questions to the TSA.

“TSA’s screening procedures are focused on our mission of security and are designed to detect potential threats to aviation and passengers,” a TSA spokesperson said. “Accordingly, TSA security officers do not search for illegal drugs, but if discovered during the security screening process, TSA will refer the matter to our law enforcement partners for their action.”

The investigation began in September 2020 after detectives served a search warrant in Winter Haven, Fla., and seized a pound of methamphetamine, the Sheriff’s Office said.

Detectives continued making undercover buys from dealers in the area and learned that large amounts of drugs were being smuggled from California to Florida via checked luggage on domestic flights, the Sheriff’s Office said. Investigators launched a wiretap investigation in February 2022.

“We’re dealing with an international smuggling ring that operated out of Winter Haven,” Judd said.

Investigators believe at least some of the drugs, particularly the methamphetamine, were being smuggled into Los Angeles and Fresno from Mexico, according to the sheriff. The drugs then went from those California hubs, some flowing into Memphis, Tenn., before coming into Orlando, and other shipments moving directly from California to Florida.

Officials named six Florida men as the smuggling ring’s alleged ringleaders. Many of the 85 suspects arrested had lengthy criminal histories with 194 prior felony convictions among them, the Sheriff’s Office said.