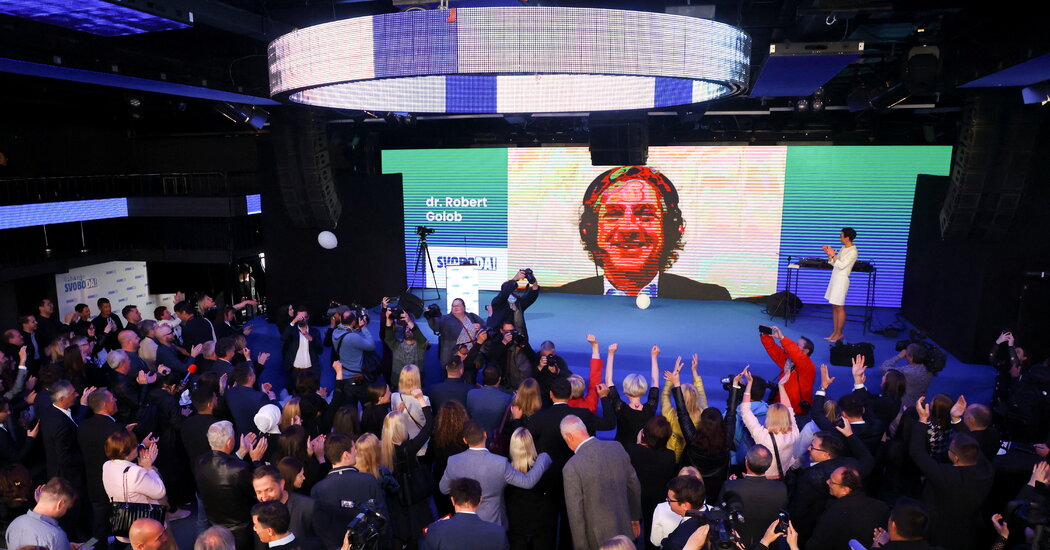 Europe’s once surging movement of nationalist populists suffered a significant setback in Slovenia on Sunday, in the formerly communist east, on the same day French voters rejected the far-right candidate Marine Le Pen in their presidential election.

In parliamentary elections in Slovenia, a noteworthy test for the appeal of right-wing populism, preliminary results indicated that the prime minister, Janez Jansa, an ardent admirer of former President Donald J. Trump, lost to centrist rivals. Liberal democracy has come under particularly intense pressure in the region over the past decade.

With 95 percent of the vote counted in an election that the opposition called a “referendum on democracy,” results indicated that Mr. Jansa’s Slovenian Democratic Party, competing against 19 rival parties, had won around 24 percent of the vote. That is far behind the 34 percent of its main rival, the centrist Freedom Movement, meaning that Mr. Jansa is highly unlikely to keep his post as prime minister.

The results, showing that no single party won a clear majority, presage a period of political haggling as rival groups try to stitch together a stable coalition in parliament. That should be within reach of the Freedom Movement, led by a political newcomer, Robert Golob, a former energy company executive, with help from the Social Democrats and other smaller parties.

Under Mr. Jansa, who became prime minister for a third time in 2020, Slovenia followed a path set by Europe’s populist standard-bearer, Prime Minister Viktor Orban of Hungary, who helped fund right-wing media outlets in Slovenia to support his ally. Mr. Orban viewed the sharply polarized Alpine nation as an important testing ground for his ambition to remake Europe in Hungary’s illiberal image.

Mr. Orban won re-election to a fourth term in early April, a victory that the Hungarian leader insisted was evidence that “Christian democratic politics, conservative civic politics and patriotic politics” are “not the past” but Europe’s future.

That boast, however, came unstuck on Sunday in both France and Slovenia, a fellow member of the European Union and NATO which, under Mr. Jansa, replicated many of the features of Mr. Orban’s increasingly authoritarian system.

A report released last week by Freedom House, the Washington research group, put Slovenia above Hungary in its ranking of countries by political rights and civil liberties, but said that over the past year, “no country’s scores fell further than those of Slovenia.” Mr. Jansa, it said, had shown “illiberal intolerance of any and all criticism.”

But unlike Mr. Orban, a longtime admirer of President Vladimir V. Putin of Russia who has refused to let arms for Ukraine pass through Hungary, Mr. Jansa criticized Mr. Putin for his invasion of Ukraine. Slovenia provided arms to Ukraine, and Mr. Jansa last month joined the first delegation of European leaders to visit Kyiv, the Ukrainian capital, to show support for President Volodymyr Zelensky.

While he followed Mr. Orban in trying to control the media, Mr. Jansa never gained the stranglehold secured by Hungary’s governing party, Fidesz. Nor did Mr. Jansa manage to replicate Mr. Orban’s success in deploying the political power of corruption, the glue of a Hungarian system that has largely merged the economic interests of private business people with the political interests of Fidesz.

Mr. Jansa was convicted on corruption charges in 2013, after his second stint as prime minister, and has since favored friendly businesses while serving as prime minister. But he did not silence all his critics through economic pressure as Mr. Orban has largely done in Hungary. Instead, Mr. Jansa often alienated even potential allies with intemperate rants on social media aimed at rallying a small but loyal nationalist base.

Formerly part of Yugoslavia, Slovenia is the most prosperous and stable of the independent countries that emerged from the Balkan wars of the 1990s. But it has been bitterly divided in recent years between supporters and opponents of Mr. Jansa. His vitriolic attacks on his critics, particularly in the media, drew frequent criticism from the European Union and groups lobbying for media freedom.

He denounced critical female journalists as “prostitutes,” cut off funding for Slovenia’s state news agency and regularly picked fights with all but his most zealous right-wing supporters.

An ardent communist and admirer of Yugoslavia’s dictator Marshal Tito in his youth, Mr. Jansa, 63, embraced nationalism in the early 1990s, when he played an important role in securing independence for Slovenia, the first Yugoslav republic to break away.

Dubbed “Marshal Twito” by his critics, a reference to Tito, Mr. Jansa caused dismay across Europe, even among his allies, when he congratulated Mr. Trump on his “victory” in the 2020 election in the United States. “It’s pretty clear that the American people have elected” Mr. Trump, Mr. Jansa tweeted, accusing mainstream media of “facts denying,” a fact-free verdict that he never retracted.