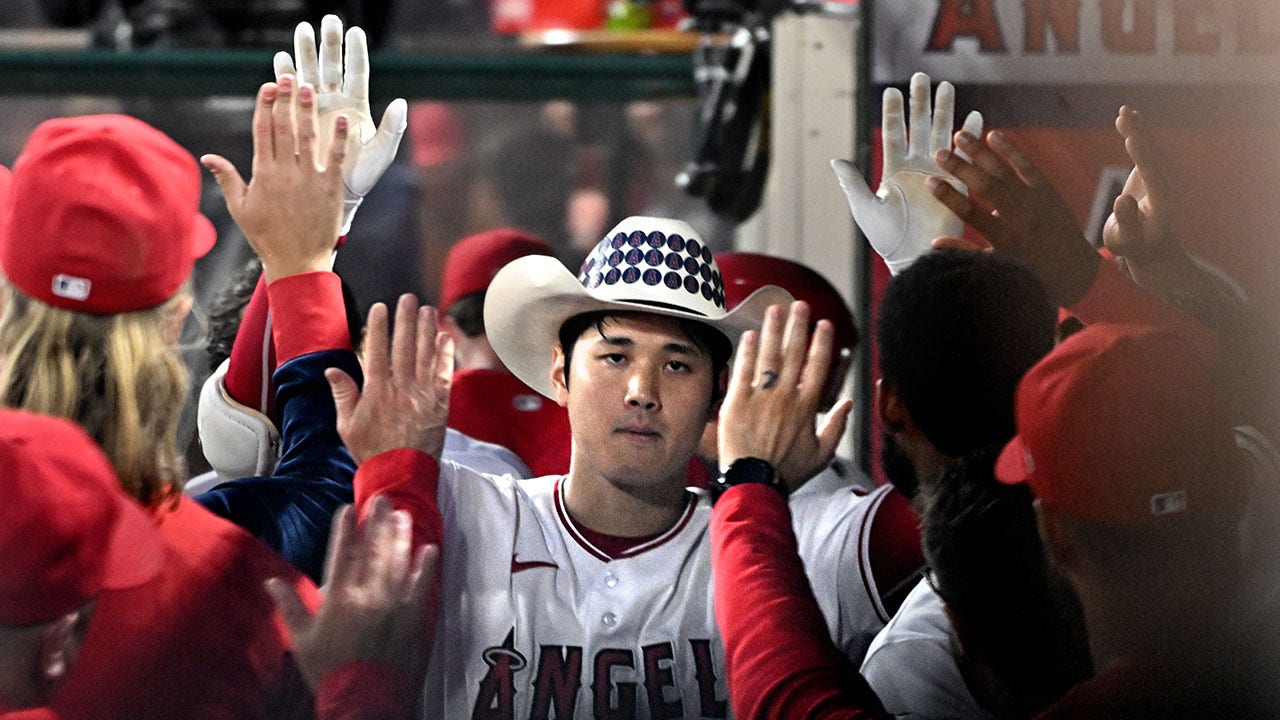 The most electric player in baseball showed why he’s must-watch TV on Thursday night, doing it all in a 5-2 Angels win over the Boston Red Sox, and ending LA’s 14-game losing streak.

Shohei Ohtani got the start for the Angels, throwing seven innings of four-hit ball while allowing just one run and striking out six. He was brilliant on the mound, throwing a 101-mph fastball to strike out Rafael Devers to end the third inning. The fastball was Ohtani’s hardest of the year, according to MLB.com.

Shohei Ohtani and Max Stassi of the Los Angeles Angels celebrate a 5-2 win against the Boston Red Sox on June 9, 2022, in Anaheim, California.
(Ronald Martinez/Getty Images)

At the plate, Ohtani was just as clutch, launching a two-run bomb in the fifth inning to give the Angels a 2-1 lead. It was Ohtani’s 12th home run and 34th RBI of the season.

“It’s been long, but it always feels great to win,” Ohtani said through his translator. “Obviously, I definitely wanted to win this one. Especially on the days I pitch, I just want to put the team in a spot to have a chance to win, and I was able to do that today.”

It’s been a brutal stretch for the Angels, who had not won a game since May 24. LA fired manager Joe Maddon during the 14-game losing streak, naming Phil Nevin as interim manager.

“I think everybody exhaled, took a deep breath,” Nevin said. “For the last 14 (games), they’ve come every day expecting to win … and when you come in after the game, you see the pain on their faces. I know it’s hurting them, and that means a heck of a lot, because they care. These last two weeks were painful for them. Painful for everybody, but when you see that care in your players, that means a lot.”

The Angels got off to a hot start to the season – surging to a 24-13 record – but now sit three games under .500 and nine back of the Houston Astros in the AL West.

Shohei Ohtani celebrates the third out in the sixth inning against the Boston Red Sox at Angel Stadium of Anaheim on June 9, 2022.
(Ronald Martinez/Getty Images)

Angels shortstop Andrew Velazquez gave LA a four-run lead in the sixth inning with a three-run home run, his third of the year.

“I think we’ve just been missing something like that, something to swing our way,” Velazquez said, according to MLB.com. “We’ve been having good at-bats the past few nights, I think, just hitting balls right at people, [and] having good pitching performances and then not scoring runs. Everything that could go wrong has been going wrong. But tonight, Shohei kind of took matters into his own hands, and then we got the big hit.”

The Associated Press contributed to this report

Joe Morgan is a Sports Reporter for Fox News.