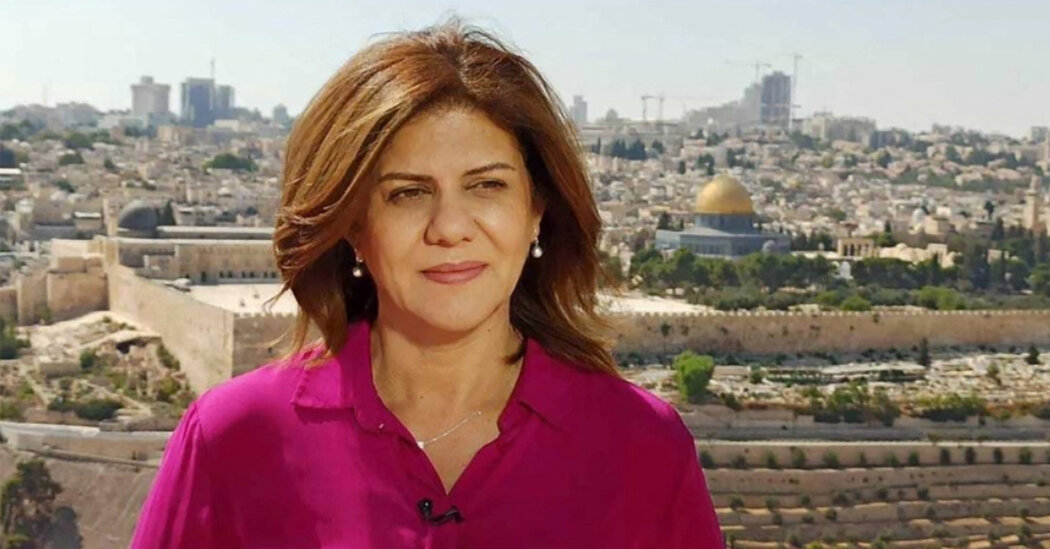 JERUSALEM — A journalist for Al Jazeera was fatally shot in the West Bank city of Jenin early Wednesday, the news network and the Palestinian health ministry said, blaming Israeli forces for her death.

The circumstances surrounding the shooting of the journalist, Shireen Abu Akleh, a Palestinian American, were not immediately clear but it happened during clashes between the Israeli military and Palestinian gunmen in the city. Al Jazeera, citing the health ministry, said the journalist had been shot in the head by Israeli forces during a raid.

The Israeli military said on Twitter that it was investigating the possibility that journalists had been injured, “possibly by Palestinian armed gunfire.”

Ms. Abu Akleh, 51, a veteran journalist, was wearing a protective vest that identified her as a member of the news media, Al Jazeera reported.

Another Al Jazeera journalist, Ali Samoudi, who was also wearing a protective vest, was shot in the back, according to the official Palestinian news agency, which cited the health ministry. Al Jazeera reported that he was in stable condition.

“Very sad to learn of the death of American and Palestinian journalist Shireen Abu Akleh,” Thomas R. Nides, the U.S. ambassador to Israel, said in a tweet. “I encourage a thorough investigation into the circumstances of her death and the injury of at least one other journalist today in Jenin.”

In the wake of a series of attacks by Palestinians in Israel, the Israeli military has been carrying out regular raids into Jenin, a Palestinian city in the occupied West Bank, since early April.

The Israeli military said on Twitter that its forces had been in Jenin to arrest suspects and came under fire first.

The Palestinian president, Mahmoud Abbas, condemned what he called the “assassination” of Ms. Abu Akleh and said he held Israel fully responsible for her death. Mr. Abbas said the death was part of a broader Israeli policy of targeting journalists to “blur reality and carry out crimes in silence.”

Last month, international and Palestinian journalist groups filed a formal complaint with the International Criminal Court accusing Israel of war crimes against journalists and of systematically targeting journalists working in the occupied West Bank and Gaza, as well as of failing to properly investigate killings of news media workers.

Ms. Abu Akleh “joins other journalists that Israel killed as they worked on revealing the crimes of the Israeli occupation,” the Palestinian information ministry said in a statement.

The ministry said it would “intensify efforts to achieve justice for our journalists and ensure accountability for the Israeli occupation for its crimes against journalists and further ensure ending Israeli impunity.”

The Palestinian Authority’s state prosecutor’s office said it had begun an investigation into Ms. Abu Akleh’s death and Mr. Samoudi’s injury, in preparation to refer the case to the International Criminal Court. An autopsy on Ms. Abu Akleh will be performed, a spokeswoman said.

Israel’s Foreign Ministry said in a statement that it had offered to conduct a joint investigation with the Palestinians into the “sad death” of Ms. Abu Akleh: “Journalists must be protected in conflict zones, and we all have a responsibility to get to the truth.”

The U.S. Embassy in Jerusalem said in a statement that it was providing Ms. Abu Akleh’s family with consular assistance, and that the protection of American citizens was a “top priority.”

“Ms. Abu Akleh covered issues in the Middle East and internationally for more than two decades and was deeply respected by many Palestinians and others around the world,” said the statement, which was attributed to an unnamed embassy spokesperson.

In the statement, the United States called for a swift, thorough and transparent investigation into the circumstances of Ms. Abu Akleh’s death and Mr. Samoudi’s injury.

Ms. Abu Akleh joined Al Jazeera in 1997 and was one of the network’s first field correspondents, Al Jazeera said.