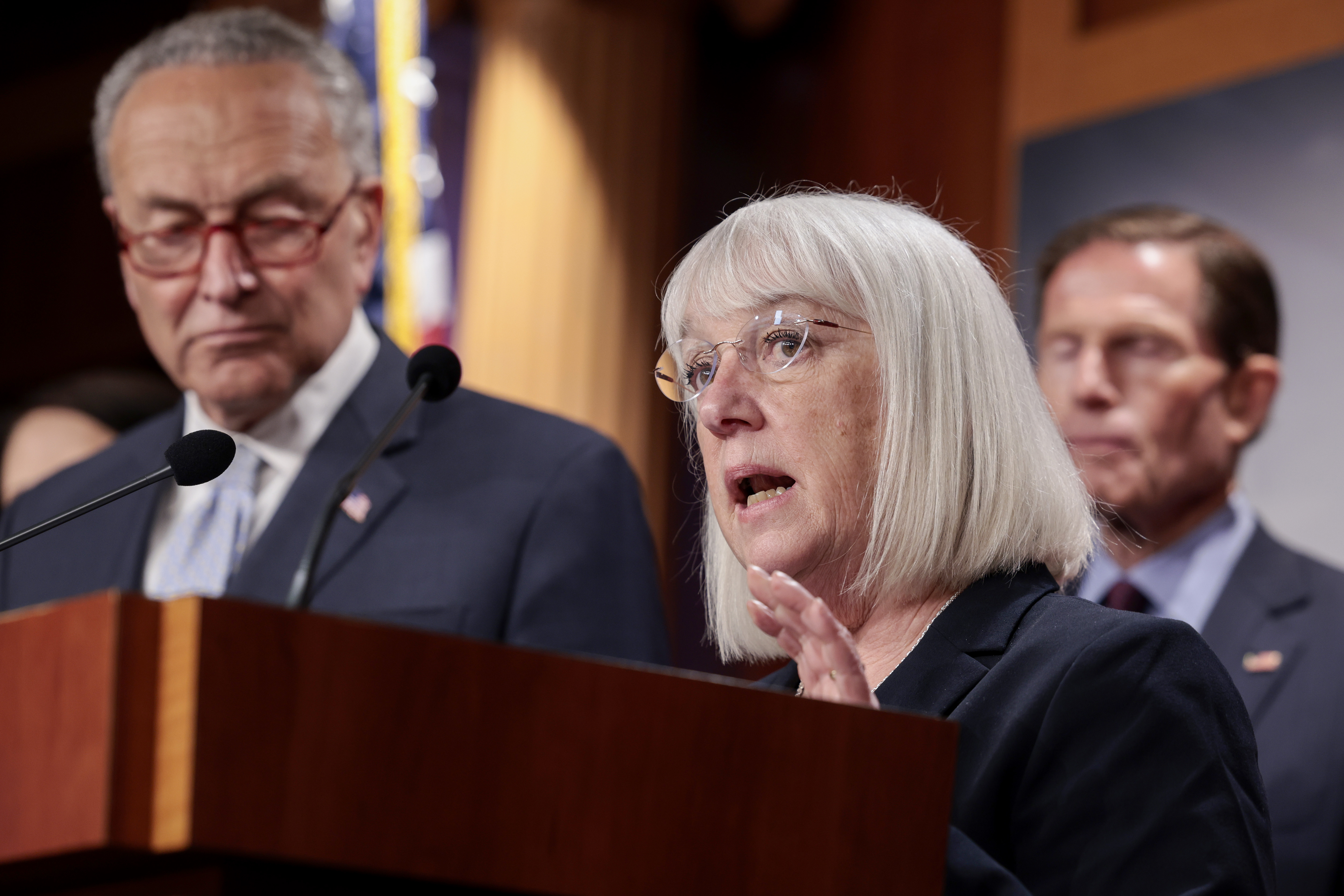 The American Rescue Plan, which policymakers enacted more than a year ago, appropriated $39 billion for child care. The White House in October proposed investing another $400 billion in the sector as part of Democrats’ multibillion reconciliation package, Build Back Better, which would have been enough to establish universal Pre-K; a new program capping eligible families’ child care costs; and more.

That legislation disintegrated a few weeks later amid opposition from Manchin, whose support is critical to any party-line vote.

Now, Murray and Kaine are proposing to spend about half as much — between $150 and $200 billion — as part of a future bill. More than $100 billion would go toward funneling $72 billion to the existing Child Care and Development Block Grant program for more robust child care subsidies; $18 billion to a new grant program that would help states expand access to pre-K; and $12 billion to the Head Start program to raise wages for teachers — all over six years, the aide said.

Some of CCDBG funds — $18 billion — would be set aside for scaling up child care infrastructure by improving facilities, raising wages and more.

The lawmakers want to spend an additional $50 to $100 billion on a pilot program within CCDBG that, like Build Back Better, would cap child care expenses for families making up to 250 percent of their state’s median income so that they would spend no more than 7 percent of their income on care for children up to the age of 5. The federal government would cover 90 percent of eligible families’ child care costs.

“Too many parents are locked out of the workforce because they can’t find or afford child care,” Kaine said in a statement. “I’m glad to support this proposal to make child care more affordable, raise wages for America’s hardworking child care providers, and open new child care programs through reconciliation.”

The edits are an attempt to address pushback to the original legislation in hopes of making it as palatable as possible to lawmakers — particularly moderates, many of whom are just months away from challenging elections. The reconciliation process, which allows Senate passage of spending-related legislation with a simple majority, requires the support of every Democrat in that chamber.

“One of the things we’ve heard from several senators and as well from some states is that we do have this existing structure, the Child Care Development Block Grant, and that they would like to see that be the major focus of a child care policy,” Julie Kashen, a senior fellow and director for women’s economic justice at The Century Foundation, said.

“So this invests significant funding into that program in order to build on what already exists. Then the other piece that we hear is that the child care infrastructure needs support …. so this does take that into account as well.”

“Manchin is always willing to engage in discussions about the best way to move our country forward,” Runyon said in a statement. “He remains seriously concerned about the financial status of our country and believes fighting inflation by restoring fairness to our tax system and paying down our national debt must be our first priority.”

“He has made clear that we can protect energy independence and respond to climate change at the same time,” Runyon said. “Additionally, he continues to believe we can and must lower the cost of prescription drugs for working Americans.”

The renewed push for child care comes as progressives cut their losses from the much more ambitious social spending plan that collapsed amid opposition from Manchin, with care advocates shifting their lobbying to focus on the policies the senator seems most open to.

Sen. Bob Casey (D-Pa.) again urged the inclusion of funds for home care at an SEIU rally at the Capitol on Thursday. But paid leave groups have been notably silent in what several people familiar say is a tacit acknowledgment that imminent congressional action on the policy is unlikely given Manchin’s continued resistance.

Care advocates “are now singularly talking about child care, because there’s an understanding that child care has a viable shot of being included — whereas the other things” like paid leave may not, Charlie Joughin, public affairs managing director for First Five Years Fund, said. “We know that child care and pre-K were on [Manchin’s] short list of things that he delivered to the White House in December as a package he was comfortable supporting.”

Outside groups are amping up the pressure. MomsRising compiled eight hours of videos from moms, child care workers and others to play on LED trucks outside the Capitol from Saturday through Tuesday, in what it has dubbed a “momibuster.” And Community Change Action is planning a series of strikes, rallies and other events across the country Monday as part of its so-called Day Without Child Care.

If Democrats are unable to enact any form of investment in care, “there will be a lot of anger,” Kashen said. “Women are viscerally feeling with the leak” to POLITICO of the Supreme Court’s recent vote to overturn Roe v. Wade “that they don’t have the support that they need to grow their economic security.”

Murray, Kaine and their allies say the sector’s dire straits render the enactment of child care cash particularly urgent — especially given a looming funding cliff. States must spend the child care cash they received under the American Rescue Plan by September 2024 at the latest.

“For so long during the pandemic, child care providers were keeping it together with duct tape” and “this money was a lifeline for them,” Kashen said. “When that goes away, if there’s nothing in its place — I don’t know how folks will continue.”

Strategists warn the spending drop-off could also have serious political ramifications given its coincidence with the next presidential election.

“If the funding runs out in 2024 ahead of the presidential election, it will be problematic for the Democratic Party as there is no long-term solution to the industry’s problem,” Democratic pollster Carly Cooperman said. “COVID-19 relief dollars for childcare providers has been popular to voters across the aisle, given the strain of the pandemic on families, but this issue is particularly important to Democrats and could turn off Democratic voters at a time where they need to be rallied and mobilized.”

Senate Democrats have ruled out passing a bipartisan plan that would require 60 votes, or the support of 10 Republicans. They consider that proposal, which Sen. Tim Scott (R-S.C.) introduced earlier this year, to be far off the mark of what is needed to prop up the industry.

“There seems to be little appetite to work across the aisle,” Cheryl Oldham, vice president of education policy at the U.S. Chamber of Commerce, said.

Republicans have denounced Democrats’ original approach as a partisan one that would “destroy child care as we know it,” Senate HELP ranking member Sen. Richard Burr (R-N.C.) said at a March hearing on the topic. They say it runs the risk of increasing costs for some families and express concerns that more than 30 percent of states could choose not to participate, shutting out the children who live there.

Scott’s bill would take a narrower approach to the issue by simply reauthorizing the existing block grant program as it stands, rather than making substantive changes.

The pandemic-induced drop in demand and spike in operating costs forced many child care providers to close or scale down. Between February and April 2020 the industry lost 370,600 jobs — 95 percent of which were held by women, according to the National Women’s Law Center. As of April, it’s still down more than 116,000 workers from February 2020.

Meanwhile, job openings have hit record highs. There were more than two jobs for every American seeking work in April, according to the Bureau of Labor Statistics. At the same time, As many as 4.85 million people told the Census Bureau they were not working because they were caring for children not in school or daycare.

“We have the AC running on full blast and the windows are open,” Kathryn Edwards, an economist at the RAND Corporation, said. “If we want to get people to work, and we see a constraint, the salient policy is to act on that constraint. But that is not the path that we have chosen.”

Care advocates say that even if Democrats can pass investment in child care, they will continue pushing for the full slate of care policies, including paid leave and home care.

“We’re supportive of what people are able to accomplish — whether it’s child care or home care, I hope it’s both,” National Partnership for Women and Families President Jocelyn Frye said. “But we’re going to continue to talk about what a comprehensive solution looks like, because we know that’s what people are wondering. And if we don’t do that, we’re not actually fixing things.”