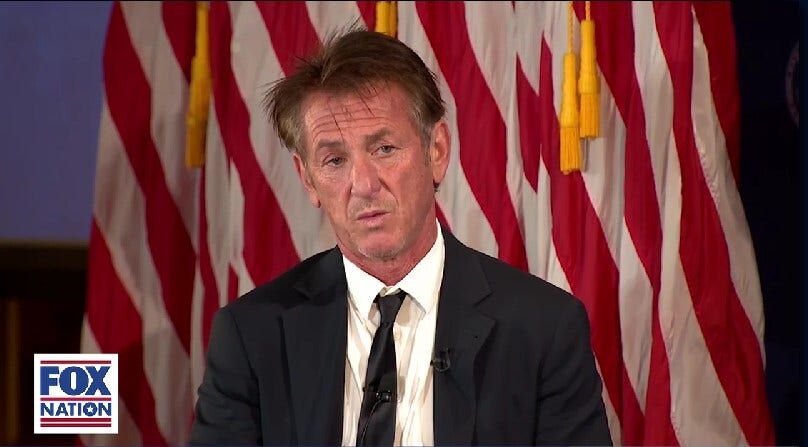 The war between Russia and Ukraine rages on, and Fox Nation is bringing viewers firsthand accounts from the country in an exclusive interview with actor Sean Penn and former National Security Adviser Robert O’Brien.

Fox News Chief Political Anchor Bret Baier sat down with the actor and the former National Security Advisor to capture some of their personal experiences from Ukraine, delving into their friendship and how Penn’s CORE Response organization came to be.

Actor and director Sean Penn visits positions of the Ukrainian Armed Forces near the frontline with Russian-backed separatists in Donetsk region, Ukraine, in this handout picture released by the Joint Forces Operation press service November 18, 2021. Press service of the Joint Forces Operation/Handout via REUTERS ATTENTION EDITORS – THIS IMAGE HAS BEEN SUPPLIED BY A THIRD PARTY.
(Reuters)

O’Brien and Penn began with their friendship story that started with joint efforts to rescue Americans who have been held hostage, including kidnaped journalist Austin Tice.

Penn delved into the history of CORE, beginning after he heard reports of amputations without intravenous pain medication and sought out a supply of morphine to help.

SEAN PENN SPEAKS OUT ABOUT TIME IN UKRAINE, SAYS ZELENSKYY ‘WILL WIN, BUT AT WHAT COST’

“Paul Farmer [American medical anthropologist] tells me they need 350,000 vials of morphine. And if you’ll get it down to your embassy, I’ll get some friends with some pickup trucks, and we’ll deliver it to the trauma centers and so on,” he said.

“And that happened, and he said it– I remember going to the Lieutenant Colonel of the 82nd Airborne with whom we were embedded at that time in Port-au-Prince. And I said, is it going to be a problem for you if I’ve got a bunch of boxes of morphine in my tent labeled A Gift from the People of Venezuela? And he said, we’ll make our apologies later. And that’s what started CORE,” Penn explained.

Baier then asked O’Brien about his previous experiences from Ukraine when he responded that he paid a visit to the nation as a member of the International Republican Institute to observe their election process in 2014.

“There was a lady who came to vote, and she had her daughter with her. And her daughter had a Ukrainian flag. And I said, ‘do you not have child care today?’ Or ‘why did you bring your daughter?’” O’Brien said.

He then detailed that the Ukrainian said she elected to bring her daughter along so she could see that “[they] can vote for [their] own leaders” and could “see what a democracy looks like” because she had lived her entire like under either under Soviet rule or “corrupt rule.”

“I really developed a love for the Ukrainian people. They’re wonderful folks, and now we’re seeing their spirit and their boldness and their daring as they fight a much bigger neighbor for their own freedom and for their own sovereignty,” he said.

O’Brien stressed the urgency to supply Ukraine with javelin missiles, noting former President Donald Trump’s willingness to arm the country during his term in office.

Penn detailed the situation once Russia’s invasion began, what led him to film his war zone documentary and how he had to weigh his options to stay or leave.

He also shared a message of unity, stressing that what he witnessed from the Ukrainian people is something Americans should strive to emulate in this divided age.

“We’ve become so divided and going to Ukraine, more than anything else, was the impact of what we’ve been missing. People who have every bit the diversity and polarization of ideology, who are able to work together and to fight together and to have a common courage, and it’s something to realize what we’ve been missing in our every day feeling about life, that they have while under this threat,” he said.

Fox Nation programs are viewable on-demand and from your mobile device app, but only for Fox Nation subscribers. Go to Fox Nation to start a free trial and watch the extensive library from your favorite Fox News personalities.