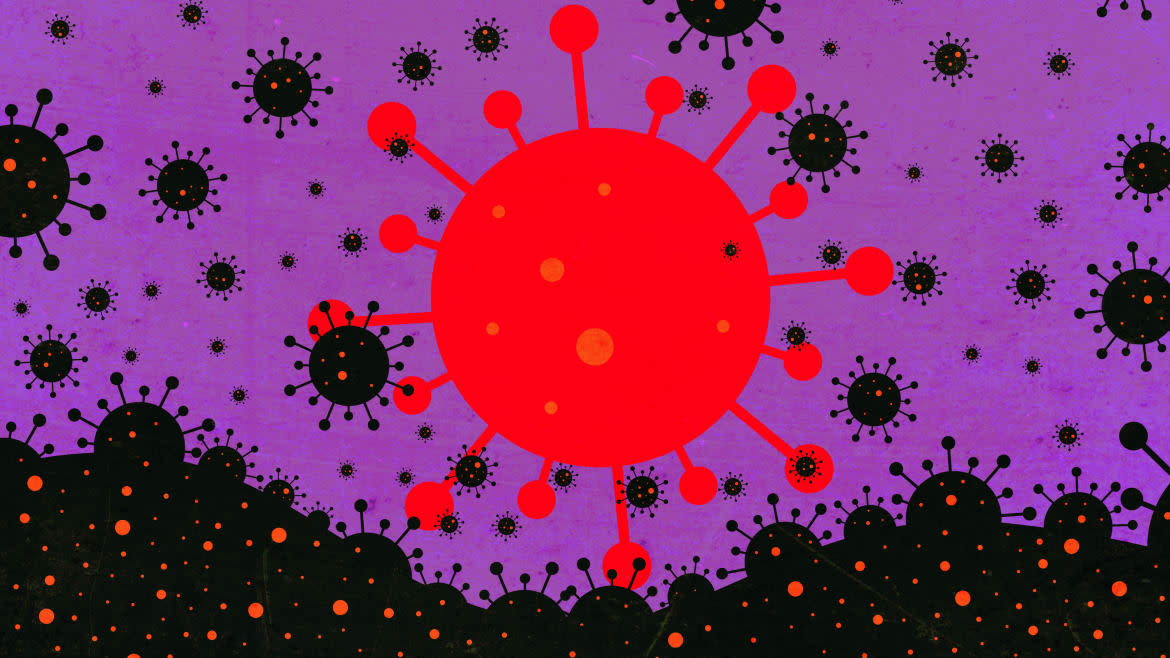 A wave of COVID infections caused by the BA.5 subvariant has crested. All over the world, daily new cases, hospitalizations and deaths are going down.

But the SARS-CoV-2 virus is almost certainly here to stay. Another wave is all but inevitable as new variants and subvariants mutate, compete for dominance and find new transmission pathways.

How fast that wave comes, and how bad it gets, probably comes down to a genetic competition between different mutations of the novel-coronavirus. If we get lucky, a mild form of the virus wins out—and buys us time to prepare for a worse form of the virus that’s almost certainly coming, sooner or later.

If we’re unlucky, that worse one comes sooner.

The scientific community is taking nothing for granted. “What we have learned from this pandemic is to expect the unexpected,” Cindy Prins, a University of Florida epidemiologist, told The Daily Beast.

BA.5, an offshoot of the basic Omicron variant, was still dominant when epidemiologists began looking for the version of COVID that might come after BA.5. They’ve identified two main possibilities.

The best of the likely possibilities is yet another form of Omicron, a variant our immune systems recognize and know how to beat. The worst is some brand-new variant that might slip right past our antibodies. A Pi, Rho or Sigma variant, if you will.

Either outcome is possible. The only thing experts don’t expect is for COVID to just… disappear. “The virus always figured out a way to survive,” John Swartzberg, a professor emeritus of infectious diseases and vaccinology at the University of California-Berkeley’s School of Public Health, told The Daily Beast. “I see nothing that suggests it’s not going to continue to do that.”

BA.1 wasn’t as lethal as Delta was, owing mostly to widespread immunity from vaccines and past infection. The worst day for BA.1 deaths, 13,000 on Feb. 9, was less catastrophic than the worst day for Delta deaths, 18,000 on Jan. 20.

But BA.1 was way more contagious than Delta. Some epidemiologists described it as the most transmissible respiratory virus they’d ever seen. BA.1 drove a record wave of infections that peaked at nearly 4.1 million new cases globally on Jan. 19.

The BA.5 surge peaked with 1.6 million new cases on July 20 and 4,500 deaths on July 27. Now infections and deaths are dropping almost everywhere that isn’t Japan.

The relative decline in COVID belies what is, by our pre-pandemic standards, still widespread suffering. “It is quite a reflection of what we have faced during the past few years that we could be in a situation with more than 120,000 known new infections per day, more than 43,000 hospitalizations per day—with 5,000 in ICUs—and 450 deaths per day [in the U.S.] and be in a mindset where we are thinking, ‘This is not so bad, we have seen worse,’” Anthony Alberg, a University of South Carolina epidemiologist, told The Daily Beast.

And the reprieve is temporary. If the last 32 months are any guide, the next COVID wave will build this winter. The only variable is the form of the virus. Is the next dominant form of SARS-CoV-2 the fourth major Omicron subvariant? Or a totally new variant?

The distinction matters a lot. All the Omicron sublineages share certain key mutations, especially around the virus’ spike protein, the part of the pathogen that helps it grab onto and infect our cells.

By now billions of people have antibodies that recognize those mutations, whether the antibodies are from one of the safe and highly-effective vaccines or from past infection. It’s the steady build-up of immunity over the past two years that’s kept death rates down even as infection rates go up. A lot of people have caught COVID since last winter—some for the second or third time. Most had mild cases.

If yet another offspring of Omicron becomes dominant in the next few months, that trend should continue. There’ll probably be a weeks-long surge in cases. But deaths might increase only slightly.

Our antibodies are ready, said Edwin Michael, an epidemiologist at the Center for Global Health Infectious Disease Research at the University of South Florida who has built sophisticated computer models for simulating the COVID pandemic.

“Naturally-acquired immunity is long lasting, estimated to 2.5 years in our models, and new infections mostly therefore arise in those losing their vaccine-induced immunity which decays faster,” Michael told The Daily Beast. “This results in a steady but smaller-sized rise and fall of cases, the fluctuations or oscillations getting progressively smaller in size over time until an apparent endemic steady state is reached.”

But if we get Pi, Rho or Sigma, brace for possible disaster.

New variants of a virus become dominant through radical mutations that significantly change how the pathogen behaves—and give it a leg up over its predecessors. With every new variant, there’s a chance it’s changed so much that our antibodies no longer recognize it. “A major genetic shift that would greatly increase its ability to infect humans regardless of vaccination status and prior infections,” according to Alberg.

Epidemiologists call that “immune escape.” It’s the nightmare scenario when it comes to viruses.

Michael modeled the surge of a major immune-escape variant. How bad it gets depends on whether the new variant dodges vaccine-induced antibodies, natural antibodies from past infection or both. “If the immune evasiveness acts similarly on both forms of immunity, then you will get significantly large repeat waves forming depending on the exact rate and strength by which escape occurs,” Michael said.

There are reasons to believe another Omicron sublineage is likeliest to come next. Geneticists scrutinizing viral samples have noted four forms of Omicron vying for dominance in recent weeks. BA.5, of course. But also BA.5.2, BA.2.75 and BA.4.6.

BA.5.2 is a slightly mutated form of BA.5 and probably doesn’t have enough advantages to outcompete its predecessor, Kristian Andersen, director of infectious disease genomics at the Scripps Research Translational Institute in California, told The Daily Beast. “So I think we’ll see BA.2.75 or something completely different become dominant.”

That “something completely different” hasn’t showed up yet in viral surveillance, meaning BA.2.75 might have a head start.

If there’s a wild card, it might be BA.4.6, a subvariant of BA.4, which is a close cousin of BA.5. “We don’t know much about .4.6 in terms of structure,” Swartzberg said. It’s possible that BA.4.6 mutated for significant immune escape despite being just another Omicron subvariant. “We could wish for a new subvariant of Omicron that is so successful at evading immunity [that] it could be a serious problem for us.”

“Be careful what you wish for,” Swartzberg quipped.

Still, as long as Omicron and its offspring are dominant, there’s a decent chance the next COVID wave will be a fairly small one. That buys us time to prepare for the wave after that—and the increasing likelihood, over time, that some immune-evasive variant eventually shows up.

No one expects another round of major lockdowns, even with a highly immune-evasive new form of COVID raging across the planet. Instead, our best tool against Pi, Rho or Sigma might be new formulations of the messenger-RNA vaccines from Moderna and Pfizer.

How COVID Could Screw You Worse With Each Reinfection

MRNA is inherently flexible. It’s a plug-and-play delivery system for tiny scraps of genetic material that prompt a particular immune response. Change the genetic material and you change the vaccine—and the antibodies it induces.

The current mRNA vaccines were designed for the Alpha variant, although they still work really well against Delta and Omicron. Anticipating that an immune-escape variant is coming, both Pfizer and Moderna are working on new “multivalent” vaccine formulations with broader effectiveness against an even wider range of SARS-CoV-2 variants.

But these new formulations aren’t quite ready. Both Massachusetts-based Moderna and Pfizer in New York have run large-scale trials of their multivalent vaccines, but the U.S. Food and Drug Administration is still scrutinizing the data.

Whether and when the FDA approves new vaccine mixes, a precondition for health agencies in many other countries to do the same, could depend on whether and when an immune-escape variant shows up. Swartzberg said the new jabs could get FDA approval in around a month.

Obviously, regulators would prefer to study the new formulations without the pressure of a major surge in infections and deaths. And they just might get that, if the next wave is a BA.2.75 wave instead of something potentially much worse.