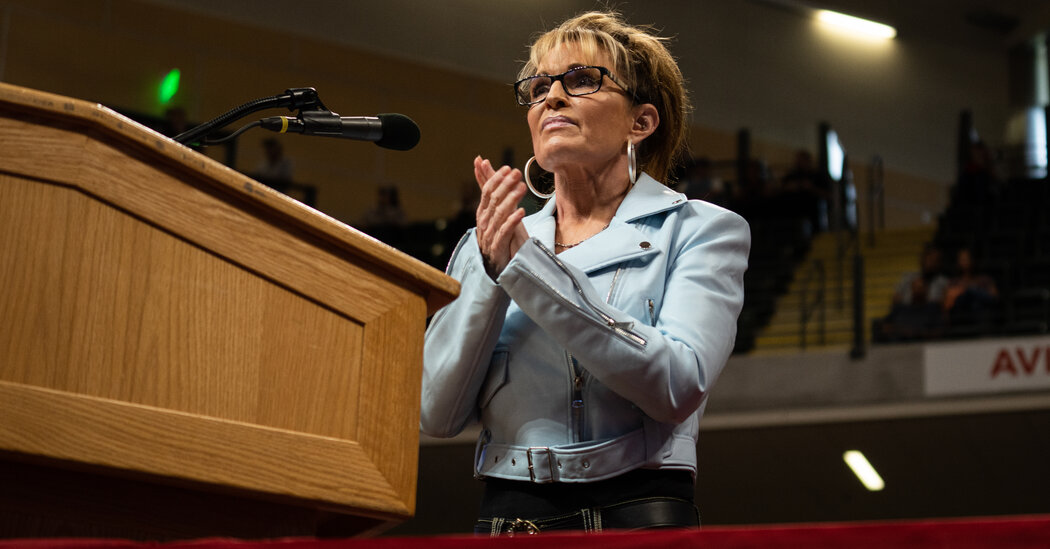 Sarah Palin’s bid for a political comeback just got a lot harder.

Ms. Palin, a household name and former Republican Party vice-presidential nominee, lost a special House election this week that will send Mary Peltola, a Democrat, to Congress until January. But she will enter a rematch with Ms. Peltola and other opponents this fall as they seek to fill Alaska’s lone congressional seat from 2023 onward.

Ms. Palin failed to consolidate the support of Republican voters, contending with low approval ratings and a ranked-choice system that favored moderate candidates. The question is whether she can overcome the same challenges in the fall.

Former President Donald J. Trump had endorsed Ms. Palin, 58, a former Alaska governor, but she came in second behind Ms. Peltola by a few percentage points late Wednesday after two rounds of tabulations in a new election system that allowed voters to rank their top three choices in order of preference. Ms. Peltola will now finish the term of Representative Don Young, who died in March after serving in Washington for nearly 50 years.

After the results were released Wednesday, Ms. Palin appeared stunned and frustrated in a video filmed at her campaign headquarters in Anchorage.

“When it comes down to second- and third-place votes, that’s going to decide who’s going to win?” she asked, criticizing the election system as she raised her arms in exasperation.

For Ms. Peltola and Alaska, her win is historic, if temporary.

Ms. Peltola, 49, a former state lawmaker who is Yup’ik, will become the first Alaska Native to serve in Congress and the first woman to hold the House seat. It also will provide a significant boost of momentum for Democrats, who have not notched a major statewide victory since Mark Begich defeated Senator Ted Stevens, a Republican, in 2008 after Mr. Stevens’s tenure was marred by a conviction on corruption charges.

Ms. Peltola’s victory adds to a string of strong showings for Democrats, most recently in the special election for New York’s 19th Congressional District. Democrats have grown more confident about their chances of holding on to the Senate in November as debate over abortion has energized their voters and President Biden’s approval ratings have ticked up slightly. Still, most Democrats acknowledged that retaining control of the House will be more difficult.

The general election in November for the House seat in Alaska, a conservative-leaning state with a strong libertarian and independent streak, is considered a tossup, in part because of the uncertainties of the ranked-choice system. Candidates still have a chance to revise their strategies, and the ballot will include a fourth top candidate to rank, the largely unknown Christopher Bye, a combat veteran who is running as a libertarian. (In the special election, the fourth candidate, an independent named Al Gross, dropped out and expressed support for Ms. Peltola.)

“Sarah Palin still has a path forward because it was still quite close,” a Republican pollster, Matt Larkin, said. “It will come down to how she and the other candidates adapt.”

In the special election, roughly 60 percent of Alaskans listed a Republican as their first choice on the ballot. Ms. Peltola and Ms. Palin earned the top two spots, but neither had 50 percent of the vote. So votes from the ballots that had ranked Nick Begich III, also a Republican, as first choice were then allocated between Ms. Palin and Ms. Peltola based on whether either woman had been listed second.

That tally showed that Ms. Palin had not united Republican voters behind her: Of the ballots that ranked Mr. Begich first, only about half listed her as a second choice. Roughly 30 percent ranked Ms. Peltola second, and a further 21 percent were considered “exhausted,” or inactive — meaning they had no second choice or they listed a candidate who had already been eliminated.

The numbers suggest that thousands of Republican voters cast their second-choice votes for a Democrat, another candidate or no one, rather than Ms. Palin.

In the end, Ms. Palin drew nearly 86,000 votes, or roughly 48.5 percent, coming nearly three percentage points behind Ms. Peltola, who won more than 91,000 votes, or 51.5 percent, according to the Alaska state election results that are expected to be certified this week.

Ms. Palin’s campaign on Thursday did not respond to multiple requests for interviews.

In early signs, Ms. Palin did not seem willing to change or moderate her tone or strategy. Videos of her reaction to the results at her campaign headquarters captured her renewing criticism of the system, saying she had long encouraged supporters not to comply. On the campaign trail, she told voters to rank her and her alone.

Ms. Palin’s attempt at a political comeback had stirred wide debate among Alaskans from the beginning over whether she was interested in public service or in seeking more celebrity. She has so far run a campaign that leans on a solid base of support among evangelical conservatives and Trump supporters. In the final weeks before the Aug. 16 special election and primary, she sparred heavily with her top Republican opponent, Mr. Begich, shunned the establishment and mostly ignored the press.

In interviews in Anchorage, Palmer and her hometown, Wasilla, her most ardent supporters were often conservative women who had long tracked her political rise and wished to see her tussle with powerful Democratic women like Speaker Nancy Pelosi. “It would be so fun to watch Nancy Pelosi swear her in,” said T.J. DeSpain, 51, an art therapist who attended an outdoor concert in Palmer days before the Aug. 16 special election.

But several voters complained Ms. Palin had spent most of her time on the reality TV circuit or in the lower 48 states after she resigned from the governor’s office in 2009 while facing ethics complaints and legal bills. Alaska Survey Research found in late July that 31 percent of registered Alaska voters viewed her positively and 61 percent viewed her negatively. In a different analysis, Mr. Larkin, the Republican pollster, argued that it was most likely that Ms. Peltola or Mr. Begich would win the special election, based on Ms. Palin’s low approval numbers.

Mr. Begich, 44, the founder and chief executive of a software development company, criticized his opponent for what he described as her failure to campaign more aggressively in the state. He sought to define himself as an idealistic fiscal conservative, despite sharing a last name with the best-known Democratic family in the state, including his uncle, former Senator Mark Begich.

In an interview Thursday, Mr. Begich said he had told his supporters to rank Ms. Palin second,but that she did not reciprocate the call.

“I think Alaskans have made clear that they don’t want to see Sarah Palin in office again,” he said. “Poll after poll showed that Sarah Palin would be unable to beat a Democrat in Alaska, and now that has been proven by the result we saw yesterday.”

The refrain was echoed by Ms. Peltola’s supporters, who argued that their top choice captured the energy of Alaskans and the independent-streak legacy of Mr. Young, who was close friends with her father. Ms. Palin “is so played out, and that shows in the results,” said Amber Lee, a Democratic strategist who is backing Ms. Peltola.

Ms. Peltola, who is friends with Ms. Palin, ran a largely positive campaign that sharply diverged from her Republican opponents in substance. She strongly championed abortion rights, called for higher taxes on the wealthy and sought an approach to development of Alaska’s resources focused on sustaining communities over corporate interests.

Heather Kendall, who is Athabascan and a retired lawyer with the Native American Rights Fund, called Ms. Peltola’s victory “a combination of an earthquake and a tsunami for Alaskan politics all at once.”

In the undertow of the electoral contest has been Mr. Trump, who made a rare visit to Anchorage in July to hold a rally for Ms. Palin, whom he hailed as “legendary.”

Mr. Trump won Alaska by 10 percentage points in 2020, but those results represented a drop from his 15-point victory in 2016 as he has alienated thousands of moderate Republicans and independents. Before Ms. Palin’s loss this week, some analysts had speculated that Mr. Trump’s endorsement of Ms. Palin could push those Republicans who did not favor him away from her, even as it might have drawn others to her side.

For now, her defeat in the special election calls into question whether she retains a strong political base in the state that powered her political rise. She served as mayor of Wasilla, a city of about 10,000 people, before becoming governor and then contending for a job in 2008 that would have put her second in line to the presidency.

Tell-all books from that campaign mocked her verbal blunders and dished on her rough treatment of staff, who clashed frequently with her over issues as varied as her aggressive political rhetoric and her wardrobe.

Mr. McCain, who died of brain cancer in 2018, grew estranged from his former vice-president-to-be in his later years. The two stopped speaking to one another, and Ms. Palin was not invited to Mr. McCain’s funeral at his family’s insistence.

But it was Ms. Palin who better represented the mood and style of the angry, growing base of Republican voters — a group that would later become the molten core of Mr. Trump’s stunning upset against Mrs. Clinton eight years after the defeat of Mr. McCain and Ms. Palin.

As news broke that Ms. Peltola had defeated Ms. Palin late Wednesday, the longtime conservative radio host Mike Porcaro fielded reactions from Republicans who seemed to find no middle ground on Ms. Palin. “She is loved or not,” he said.

One caller stuck with him in particular, a 30-year-old Republican who said he had ranked Mr. Begich first and Ms. Peltola second because he had grown tired of Ms. Palin and Mr. Trump. “It is pretty obvious the Republicans have more people, but they seem to be at odds with each other, and it opens the door for the Democrat,” Mr. Porcaro said.