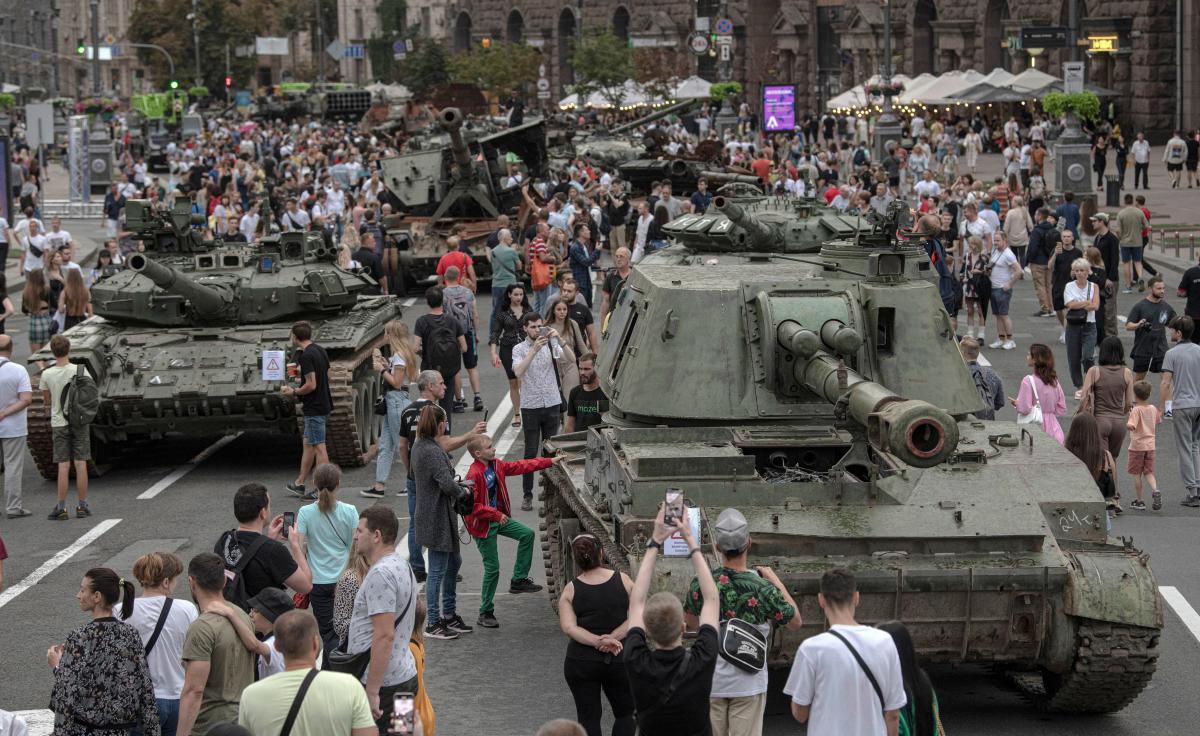 Angry Russians called Sunday for attacks on Ukrainian government buildings after the death of a prominent Putin ally in a car bombing after a festival outside Moscow.

Mykhailo Podolyak, an adviser to Ukrainian President Volodymyr Zelenskyy, denied Ukrainian involvement: “We are not a criminal state, unlike Russia.” Ukrainian officials, however, urged government employees in the capital to work remotely this week amid concerns that the buildings would be targeted for attack.

Russia’s Investigative Committee said the explosion ripped through the Toyota Land Cruiser Darya Dugina, 29, a conservative commentator, was driving near the village of Bolshie Vyazemy on Saturday night. Rt reported that the vehicle belonged to her father, well-known anti-Western Russian nationalist Alexander Dugin, giving rise to suspicions that he was the intended target.

The blast came at about 9 p.m. local time, shortly after Dugina left a festival where she attended a “Tradition and History” lecture led by her father, Russian authorities said.

Maria Zakharova, a Russian foreign ministry spokesperson, said on Telegram that Russia would consider any involvement by Ukraine in the incident to be “state terrorism.”

►Two Russians and a Ukrainian were arrested for alleged espionage at an Albanian military plant. Albania, a NATO member since 2009, has strongly renounced Russia’s invasion of Ukraine and has joined in sanctions against Moscow.

►The U.S. will ship another $775 million package of arms to Ukraine, including long-range artillery ammunition used to devastating effect on Russian forces, according to a senior defense official who spoke on condition of anonymity under Pentagon guidelines.

Russian hard-liner Igor Girkin, a minister in the self-declared Donetsk People’s Republic, has become an increasingly outspoken critic of the Kremlin’s handling of the war in Ukraine, the British Defense Ministry reports. Girkin posted a grudgingly admiring critique of President Volodymyr Zelenskyy’s conduct during the war in contrast to Russia, where “at the end of the sixth month of the war … we play tank biathlons and hold festivals of military bands.”

The defense ministry explains that the tank biathlon was the finale of Russia’s International Army Games that took place near Moscow last week.

“A significant proportion of Russia’s military and security professionals probably believe that it is inappropriate to continue committing forces to peace-time military ceremonial events while Russian troops continue to suffer heavy casualties in Ukraine,” the defense ministry said Sunday in an intelligence update.

Direct losses to the Ukrainian economy from the war have reached $113.5 billion, a Ukraine economist says. Maksym Nefyodov, head of reform support projects at the Kyiv School of Economics Institute, said this during a nationwide television marathon, Ukrinform reports. Images of the destruction and damage to the infrastructure of Ukraine, collected with the help of UAVs and satellites, are being actively analyzed to record the damage caused and to prepare for restoration of devastated cities, Nefyodov said.

“There is another direction of our research – needs for recovery,” Nefyvodov said. “And the ‘Russia Will Pay’ project is actively developing in this direction.”

A former Ukrainian official was detained by Russian authorities in the occupied city of Melitopol, accused of committing sabotage, the Russian administration said Sunday. The officials was accused of conducting surveillance on Russian military flights – and components for explosives and manuals on the use of the military arsenal were found at his home, the administration said in a message on its Telegram channel.

The announcement came one day after the Ukrainian military said it had destroyed a Russian radar system and other equipment in the region.

“Tonight, there were powerful explosions in Melitopol, which the whole city heard,” Melitopol Mayor Ivan Ferodov said. “According to preliminary data, (it was) a precise hit on one of the Russian military bases, which the Russian fascists are trying to restore for the umpteenth time in the airfield area.”

Ukrainians stroll down Kyiv street with Russian tanks on display

Pedestrians on an avenue in Kyiv viewed destroyed Russian tanks on display on Saturday, rolled in on the beds of Ukrainian trucks. The burned-out tanks and infantry carriers were brought to Khreshchatyk boulevard leading to Maidan Square in central Kyiv, drawing public attention. Locals were able to walk beside the exhibit of military vehicles with the street blocked off to traffic.

“It is very beautiful that we made such an exhibition because patriotic places come together and want to rush to go help and defend. And when everyone helps, it raises morale very much,” student and Kyiv resident Irina Tupolenko told the Associated Press.

The vehicles were collected from battlefields in the east and south and signaled defiance to the Russian invaders, The New York Times reported.