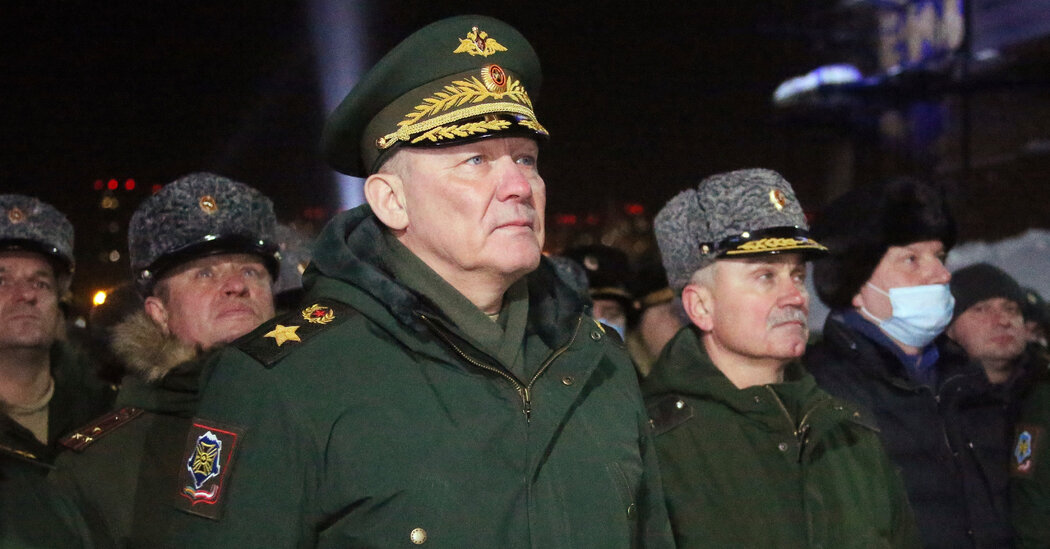 WASHINGTON — Seven weeks after sending a new commander to Ukraine to oversee a refocused invasion, Russia faces a truth that a former American defense secretary, Donald Rumsfeld, defined as the necessity of going to war with the army you have, not the one you might wish to have.

The Russian military, beaten down and demoralized after three months of war, is making the same mistakes in its campaign to capture a swath of eastern Ukraine that forced it to abandon its push to take the entire country, senior American officials say.

Gen. Aleksandr V. Dvornikov, the commander, was appointed in April in what was widely viewed as an acknowledgment by President Vladimir V. Putin of Russia that his initial war plan was failing.

Soon after his appointment, General Dvornikov tried to get disjointed air and land units to coordinate their attacks, American officials said. But he has not been seen in the past two weeks, leading some officials to speculate as to whether he remains in charge of the war effort.

Russian pilots also continue to demonstrate the same risk-averse behavior they did in the early weeks of the war: darting across the border to launch strikes and then quickly returning to Russian territory, instead of staying in Ukrainian air space to deny access to their foes. The result is that Russia still has not established any kind of air superiority, officials said.

The Russian military has made some progress in the east, where concentrated firepower and shortened supply lines have helped its forces fight intense battles in recent days. After three bloody months, Russia finally took Mariupol in mid-May, potentially creating a land bridge from the Russian-controlled Crimean Peninsula to the south.

As Russia struggles to move forward, Ukraine has also suffered setbacks. President Volodymyr Zelensky of Ukraine recently said that as many as 100 Ukrainian servicemen might be dying every day in the fighting. And on Tuesday, Russian troops advanced toward the center of Sievierodonetsk, a city that has become a central focus for the military since it shifted its attention to the east.

But some of the areas that Russian forces managed to seize have been quickly contested again, and sometimes retaken, by Ukrainian troops.

But by May 13, control of the city had flipped again. “The Russians took Kharkiv for a short period of time; the Ukrainians counterattacked and took Kharkiv back,” Defense Secretary Lloyd J. Austin III said at a news conference at the Pentagon last week. “We’ve seen them really proceed at a very slow and unsuccessful pace on the battlefield.”

Ukraine is now pushing Russian troops north and east from Kharkiv, “in some cases all the way back to Russia,” said retired Gen. Philip Breedlove, the former supreme allied commander for Europe. “So now Ukrainians are threatening to cut off Russian lines of supply and pushing their forces to the rear.”

Cutting off Russian supply lines east of Kharkiv would put Russian troops in the same situation they were in after their advance on Kyiv, the capital of Ukraine, at the beginning of the war, officials said. Ukrainian units carrying shoulder-fired Javelin antitank missiles picked off Russian soldiers as miles-long Russian convoys near Kyiv stopped moving forward. The invasion stalled, and thousands of Russian troops were killed or injured. Russia then refocused its mission on the east.

In the early weeks of the war, Russia ran its military campaign out of Moscow, with no central war commander on the ground to call the shots, American and other Western officials said. In early April, after Russia’s logistics and morale problems had become clear, Mr. Putin put General Dvornikov in charge of a streamlined war effort.

General Dvornikov arrived with a daunting résumé. He started his career as a platoon commander in 1982 and later fought in Russia’s brutal second war in Chechnya. Moscow also sent him to Syria, where the forces under his command were accused of targeting civilians.

In Ukraine, he established a more streamlined process. Russian pilots began coordinating with troops on the ground toward a similar objective in the eastern region of Donbas, and Russian units were talking to one another about shared goals.

Russian oil embargo. European Union members finally reached an agreement on a Russian oil embargo and new sanctions against Russia. The long-delayed deal effectively exempts Hungary, which had opposed the embargo, from the costly step the rest of the bloc is taking to punish Russia.

Second war crime trial. A Ukrainian court sentenced two Russian soldiers to 11 and a half years in prison for shelling a town in the country’s northeast during the war. It was the second guilty verdict handed down by Ukrainian courts for war crimes since the invasion began.

But the invasion is not “proceeding particularly differently in the east than in the west because they haven’t been able to change the character of the Russian army,” said Frederick W. Kagan, a senior fellow and director of the Critical Threats Project at the American Enterprise Institute. “There are some deep flaws in the Russian army that they could not have repaired in the last few weeks even if they had tried. The flaws are deep and fundamental.”

At the top of that list is the Russian army’s lack of a noncommissioned officers corps empowered to think for itself, Pentagon officials said. American troops have sergeants and platoon leaders and corporals who are given tasks and guidelines and left to accomplish those tasks as they see fit.

But Russia’s military follows a Soviet-style doctrinal method in which troops at the bottom are not empowered to point out flaws in strategy that should be obvious or to make adjustments.

The Ukrainians, after seven years of training alongside troops from the United States and other NATO countries, follow the more Western method and have proved particularly agile at adapting to circumstances, American military officials said.

A two-week fighting pause after the Russian military gave up the fight for Kyiv was not long enough to turn the campaign around, even with a more limited goal, General Breedlove said. General Dvornikov’s “new tactics, resetting the command and control so there was a focused decision maker — all that was right or proper,” he said.

But, General Breedlove added: “Even our army would be hard-pressed to refit, refurbish and reorganize in two weeks after having received such a sound whipping.” When General Dvornikov took control, “the force was thrust back into the battle too quickly. That decision had to have come from Moscow.”

After renewing an assault on the Donbas, Russia has pounded cities and villages with a barrage of artillery. But troops have not followed that up with any kind of sustained armored invasion, which is necessary if they will hold the territory they are flattening, military officials say. That means that Russia may find itself struggling to hold on to gains — as it did in Kharkiv.

Evelyn Farkas, a former senior Pentagon official for Ukraine and Russia in the Obama administration, said Mr. Putin was still too involved in the fight.

“We keep hearing accounts of Putin getting more involved,” said Ms. Farkas, who is now executive director of the McCain Institute. “We know that if you have presidents meddling in targeting and operational military decisions, it’s a recipe for disaster.”