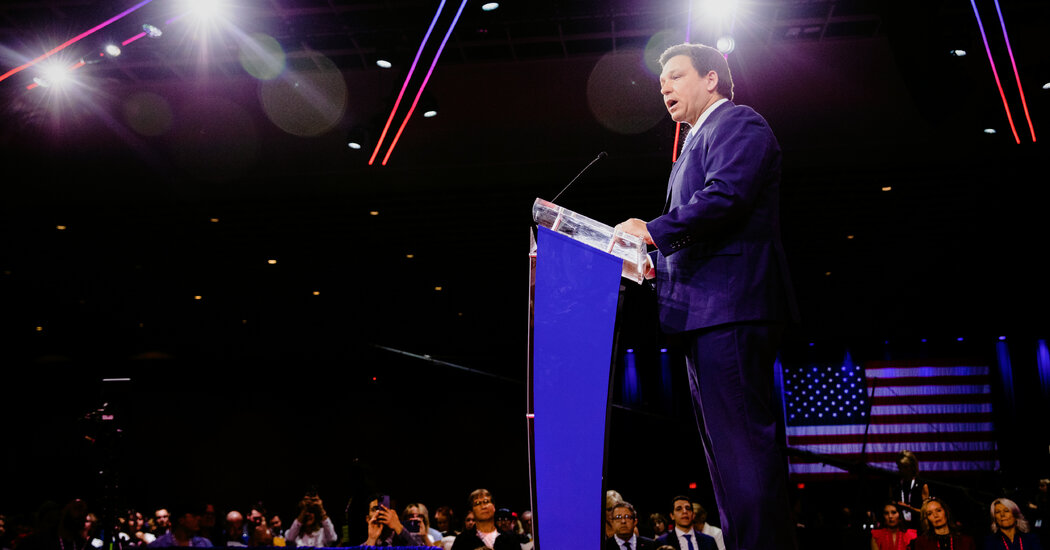 Gov. Ron DeSantis of Florida, who appears to be preparing to run for president in 2024, has achieved a national platform by leaning into cultural battles. He signed laws limiting what teachers can teach about race, sexual orientation and gender identity, and he recently suspended an elected prosecutor who said he would refuse to enforce the state’s anti-abortion laws.

DeSantis is up for re-election in November. I spoke to my colleague Patricia Mazzei, who as The Times’s Miami bureau chief has tracked his rise, about how DeSantis has changed life in Florida.

German: Where do you see DeSantis’s impact on Florida?

Patricia: He was elected by just 32,000 votes or so but has governed as if he had a mandate to reshape the state into a laboratory for right-wing policies.

Tuesday’s primary didn’t have big-name Republicans on the ballot, so DeSantis got involved in school board races. These are traditionally nonpartisan and sleepy. But he endorsed 30 candidates, and he campaigned for them. And he succeeded: So far, 20 of his endorsed candidates have won outright, and five are going to runoffs.

This is an example of trying to turn the state red — not just at the top level, but by starting at the bottom. That builds the bench of candidates who will back him as they go on to make their own political careers. It’s leaving a longer-lasting legacy of the policies and politics he espouses. School board decisions affect parents’ and their children’s lives on a daily basis by deciding what will be in school curriculums.

The focus on schools reminds me of the quote from the conservative Andrew Breitbart that “politics is downstream from culture” — meaning that to win elections, partisans first need to shape culture. Changing what the next generation learns about seems like a clear attempt to change the culture, as does DeSantis signing an education bill that critics call the “Don’t Say Gay” law.

I went to one of the campaign events for these school boards last weekend in Miami-Dade County. There, the lieutenant governor — DeSantis’s running mate — said, “Our students should go to school to learn their ABC’s, not their L.G.B.T.’s.”

But Florida is not entirely a red state. For example, Miami is often called a gay mecca. How do you reconcile that with DeSantis signing the education law?

It’s just a contradiction in the politics. People who live in strictly red or strictly blue areas of the country may not know this. But where I am, if you go into a family gathering, party, anything, you never assume that everybody thinks the way you do. Even in cities like Miami or Orlando, where people are more liberal, your co-worker, neighbor, cousin and parents may have diametrically opposed political views.

How has DeSantis succeeded in this environment? The typical formula has been to act as a moderate, but DeSantis has openly embraced the hard right.

He has long been a Trump supporter and was a member of the conservative Freedom Caucus when he was in Congress. He got elected governor in 2018 by winning Trump’s endorsement and running a tongue-in-cheek ad with a jaunty tune and DeSantis exhorting his oldest child to “build the wall” with toy blocks.

But he governed his first year by trying to lie low.

Then came the pandemic. He tried to keep the state open, and he seemed to take criticisms of his looser pandemic policies personally. He started to score political points by portraying himself as a foe of the “corporate media” that conveyed virus restrictions endorsed by public health experts.

You can talk to independents, even Democrats, who may not necessarily vote for him, but they remember the lasting impact DeSantis’s policies had on their children, that they could go to school. They are happy they were able to keep their businesses open.

Is there a political risk for DeSantis’s re-election campaign in overreaching?

He has so many advantages built in for him. He’s got a lot of money right now. He’s got Republicans down the ticket who are all going to campaign with him and for him. His party is much more organized in Florida, and it has a better operation to get their voters to the polls than the Democrats. It’s a governor election in a midterm year, during which Florida has reliably gone red for almost three decades.

So even if there’s a feeling of overreach, is that enough for him to lose? Well, Democrats see a narrow path to victory. But it’s unlikely — it’s an uphill climb.

More on Patricia Mazzei: She grew up in Caracas, Venezuela, and decided to become a reporter after working as a student journalist at the University of Miami, where a professor declared her to be a “muckraker.” She began her career in 2007 and began writing for The Times in 2017.

The Sunday question: The way Americans pay for college is broken. What would fix it?

President Biden’s plan to cancel student debt is a good start, says Suzanne Kahn, but more government funding for colleges would reduce students’ reliance on loans. Laura Arnold wants more visibility into school quality so students can know whether a loan is worth it.