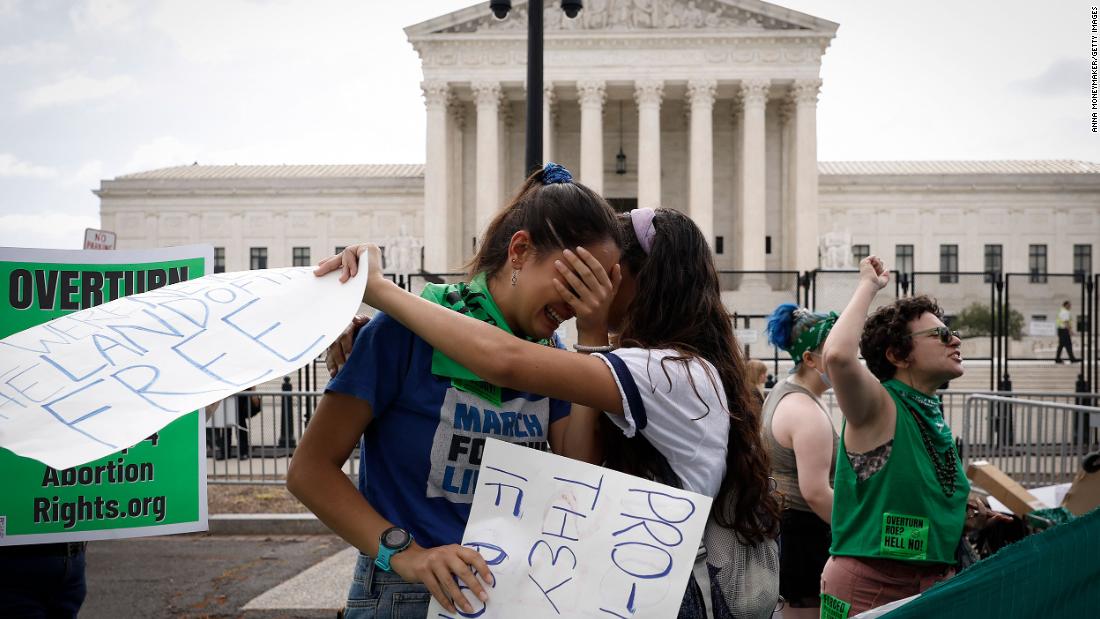 Saturday is the first full day for outright bans on abortion in some states after the Supreme Court overturned the nearly half-century-old Roe v. Wade decision.

Three states – Kentucky, Louisiana and South Dakota – have so-called “trigger bans” that went into effect automatically. Ten other states have trigger bans with implementation mechanisms that occur after a set period or after a step taken by a state government entity.

Yesterday, Justice Clarence Thomas wrote separately to explicitly call for other rulings to be revisited.

“In future cases, we should reconsider all of this Court’s substantive due process precedents, including Griswold, Lawrence, and Obergefell,” Thomas wrote, referring to decisions on contraception, sodomy and same-sex marriage. Liberals said that those rulings are now at risk.

Here are the latest developments:

“Jill and I know how painful and devastating a decision it is for so many Americans, and I mean so many Americans. The decision is implemented by states. My administration is going to focus on how they administer it, and whether or not they violate other laws, like deciding not to allow people across state lines to get public health services, and we’re going to take actions to protect women’s rights and reproductive health,” he said before departing for the G7 summit in Germany.

The White House said Biden “is going to continue to find solutions” to ensure abortion rights, but did not offer details on potential executive actions the administration is weighing to do so.

Protests largely peaceful, with some arrests: Demonstrators gathered in front of the Supreme Court and in cities around the US again to protest the decision. While the protests were largely peaceful, there were a few incidents Friday and early Saturday, including a tense situation with anti-abortion activists at the only Mississippi abortion clinic, tear gas used to disperse a crowd in front of the state capitol, and abortion rights supporters in Los Angeles marching onto a freeway.

Governors shore up resources: Minnesota’s governor issued an executive order Saturday providing protections for people coming to Minnesota for reproductive healthcare from states where abortion is illegal or criminalized, according to a release from Gov. Tim Walz’s office.

Washington Gov. Jay Inslee vowed to make his state a “sanctuary state” for reproductive choice for people across the country, regardless of abortion bans existing in other states. He pledged a $1 million down payment to start subsidizing reproductive healthcare networks across the state ahead of an anticipated influx of patients.