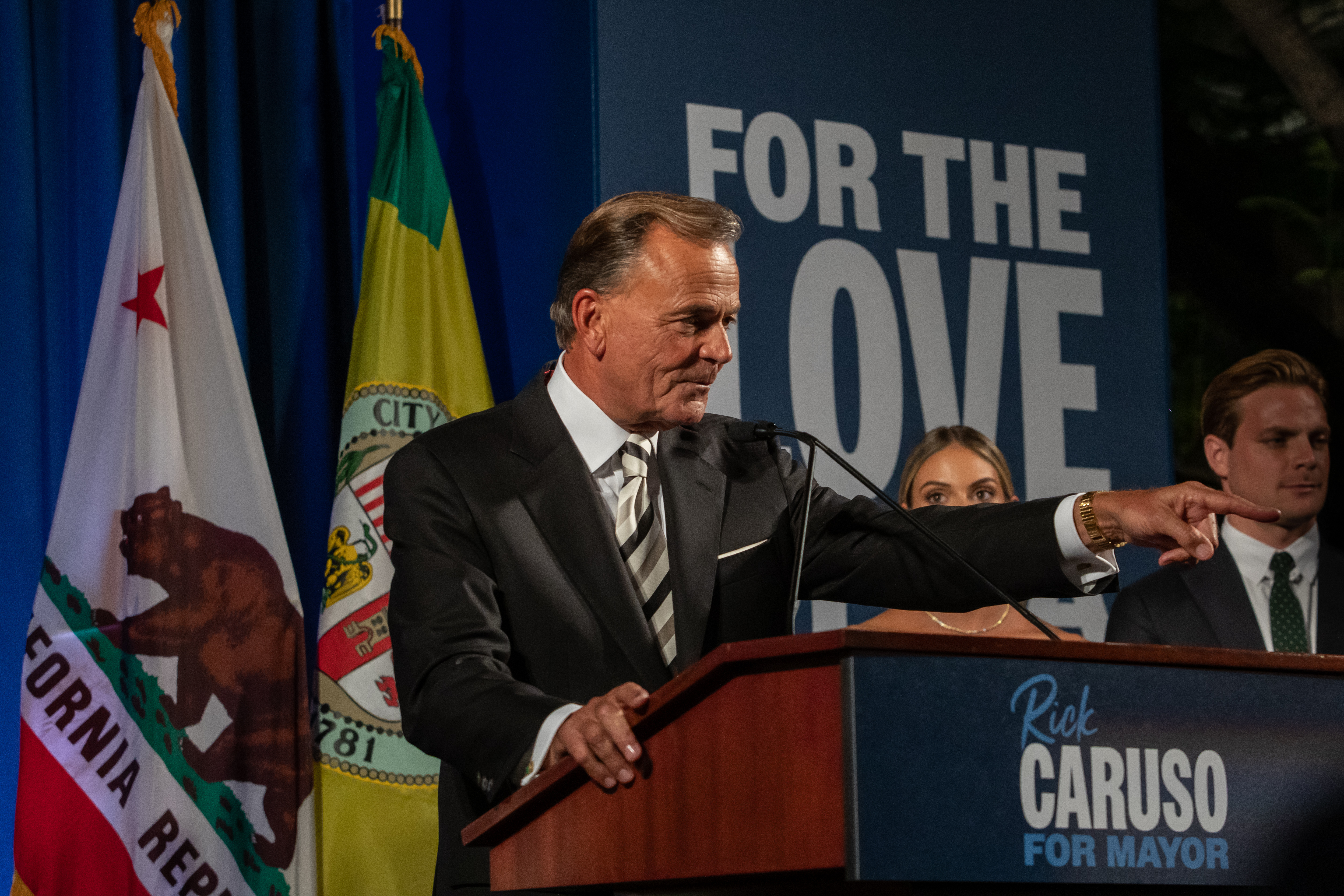 Caruso’s predicament is a reminder of a bitter truth about politics: Money can get you only so far. It reflects the fact that in a deeply Democratic city, many are apparently unwilling to support a former Republican-turned-Democrat who, despite his insistence that he supports the right to abortion, has donated to anti-abortion candidates in the past.

There’s also the reality that Caruso faces a shifting mood less favorable to his relatively conservative message — and a strong candidate in Bass, a highly regarded congresswoman who almost ended up as President Joe Biden’s vice president.

“The conversation has shifted in ways that are helpful for Bass,” said Jessica Levinson, a Loyola Law School professor and elections expert.

The Caruso campaign insists it’s way too soon for a post mortem.

“It’s a little short-sighted to say ‘Well, he spent $40 million and then came in second,’” said Areen Ibranossian, a senior adviser to the campaign. “Anybody who counts us out is not really looking at the dynamics of the race.”

At the start of the year, Caruso seemed primed for a run at an office he had eyed for years. He had money, powerful connections from his decades as a developer of high-end shopping centers and celebrity friends like Kim Kardashian. He also had an electorate in a sour mood after two years of pandemic that seemed receptive to his message, which centered around fears of rising crime and the increased presence of homeless people around LA.

But the bubble bursted on primary night when Bass beat him by 7 points in a field of 12. Since neither won 50 percent, the top two candidates advanced to the general election. Recent polls suggest Caruso faces an even bigger defeat in November.

Caruso’s second-place finish in the primary and gloomy poll numbers underscore the fact that Los Angeles is still a town dominated by liberal Democrats who aren’t ready to embrace someone like Caruso, especially when the alternative is the progressive Bass. The dynamic stands in contrast to New York’s election last year of Eric Adams, a moderate Democrat who beat out a crowded primary field with a law-and-order message.

Bass was up 12 points over Caruso, 43 percent to 31 percent, according to a Los Angeles Times/UC Berkeley poll published Friday. The congresswoman expanded her previous 7 percent margin by picking up supporters of other primary candidates and has nearly erased the mall developer’s lead in the largely suburban San Fernando Valley.

The congresswoman had an 11-point advantage in an Aug. 19 poll commissioned by Communities United for Karen Bass, a PAC supporting her campaign.

The candidates are jockeying to lead a city where, unlike in, say, Chicago or New York, the mayor doesn’t even have all that much power. It’s a high-profile role but requires working with a fractious city council, every member of which is a Democrat. Bass, first elected to Congress in 2010, has deep government experience; Caruso has relatively little.

The developer served as a commissioner from 1985 to 1993 on the board of the Department of Water and Power, appointed by the late Democratic Mayor Tom Bradley. He was also appointed to the Los Angeles Police Commission in the early 2000s, serving as president.

Most of his municipal experience stems from his role as one of the most prominent developers in the city, building high-end retail projects such as The Grove and The Americana at Brand.

He launched his campaign in February, the day before the filing deadline, arguing that crime and homelessness could only be tackled by an entrepreneur and political outsider. After early polling showed him with just 8 percent support, he quickly outpaced a field of Democrats.

Caruso campaigned sooner and at a higher volume than his competitors. He launched more than $2 million worth of TV and digital ads, weeks before other candidates could even write a script. For much of early 2022, voters were bombarded with ads of Caruso bashing his hometown as a hellscape of homelessness and violent crime.

All told, the real estate mogul has spent an unprecedented $43 million of his own fortune on the campaign, including $28 million on advertising in the primary, according to spending tracker AdImpact. At their height, leading up to election day, his 30 second ads appeared 1,700 times in one week on LA airwaves. Actress Gwenyth Paltrow endorsed him. Then Kim Kardashian told her 313 million Instagram followers to vote for him. Rapper Snoop Dogg even jumped in to voice his support.

The momentum behind the campaign was so significant that some speculated Caruso would come out of the primary with more than 50 percent of the vote — giving him the outright win and negating the need for a runoff in November.

But when the dust cleared, he had come up short.

It’s been a surprise given the candidate’s background as a developer shrewd enough to understand the market, said John Shallman, a longtime political consultant who recently managed the unsuccessful mayoral campaign of Los Angeles City Attorney Mike Feuer.

“This one, on every level, has been an epic failure,” Shallman said. “I think he’s learned a really tough lesson that a lot of people in the past have … You can buy businesses, you can buy yachts, you can buy millions in airtime and glossy brochures, but you can’t buy voters.”

Caruso continues the crusade. He just added another $3.5 million to his campaign. Most recently, he spoke to a group of LA businesswomen and hosted a Filipino community event at one of his retail centers. Many expect him to spend heavily as the general election gets closer.

But compared to his all-out advertising blitz in the spring, Caruso has had a relatively quiet summer. Since the primaries ended, he’s spent a few thousand dollars on desktop and mobile ads, but nothing on television or streaming video, according to AdImpact.

The campaign says the early blitz was needed for someone with relatively low recognition in politics and the summer lull was intended to preserve resources for the fall.

“If there’s another candidate that’s advertising in the summer doldrums, I’d like to see who they are and how they’re able to spend that kind of money in the summer,” Ibranossian said.

Shallman and other LA political consultants say it’s a sign that Caruso is done.

“Rick Caruso is Humpty Dumpty, and there’s not a political consultant in the country that can put him back together again,” said Trujillo, Buscaino’s former consultant.

Many of the city’s veteran campaign strategists argue that Caruso’s tough-on-crime message and profile as a longtime Republican from LA’s upper crust simply doesn’t connect with a diverse, liberal electorate — regardless of how much he spends on ads.

Bill Carrick, a Democratic consultant who led outgoing Los Angeles Mayor Eric Garcetti’s 2013 campaign, said that Caruso’s portrayal of the city as a dystopian nightmare went too far, even with homelessness and crime high on people’s minds.

“To the extent that it sounds like it’s resonating off of a more conservative, Republican, Trumpian message, I don’t think that’s good,” he said.

Carrick also said Caruso has failed to adequately explain to voters why he registered as a Democrat, a decision he made a week before the deadline to enter the race. That has left him exposed to attacks on his liberal credentials and polarized the race in a partisan way.

The threat to abortion rights following the Supreme Court decision in June to overturn Roe v. Wade is also a factor. “When the decision came out, it was really the first big moment where Caruso momentum stalled out, where I think Bass and her supporters did a good job of reminding the public that Caruso was a Republican and he supported pro-life candidates and causes,” Levinson said.

The recent Los Angeles Times poll found that Bass holds a 40-point lead among registered Democrats, a fact Carrick argued makes the race look much closer to a Democrat vs. Republican contest.

Caruso seized on the same wave of tough-on-crime sentiments animating the effort to recall the city’s liberal district attorney, George Gascón. He backed the recall effort early in his campaign with a $50,000 contribution, blaming the recent rise in crime on Gascón’s reform-minded policies.

A recent LA Times/Berkeley poll found the recall had a good chance of succeeding had it made it to the ballot, with a 20-point lead in favor, but petitioners failed to gather the necessary signatures in time.

Bass’ campaign has made Caruso’s political background and antagonistic rhetoric toward the Democratic officials who dominate the city’s government the center of a strategy to combat his endless resources.

Her team in recent weeks has promoted a video from a private fundraiser with Hillary Clinton, who hit on Caruso’s past donations to candidates opposed to abortion rights and not-so-subtly compared his work history to former President Donald Trump.

“She’s running against a Republican, billionaire, shopping mall developer who registers as a Democrat the week before he announces his mayoral campaign, and has torn down every Democrat he can find ever since,” said Bass spokesperson Sarah Leonard Sheahan. “There’s such a stark contrast in the race, and this is a Democratic city. Folks just want to make it clear that there’s one real, pro-choice Democrat in the race.”

Even more cautious observers who aren’t ready to declare Bass the winner say Caruso’s chances of beating her are slim.