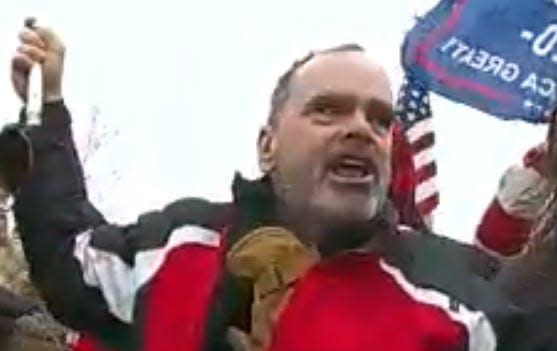 WASHINGTON – A retired New York police officer and Marine veteran was sentenced Thursday to 10 years in prison for assaulting police in the Capitol attack on Jan. 6, 2021 – the longest sentence yet from the riot.

Thomas Webster, 56, of Goshen, New York, was convicted in a federal jury trial in May of all six charges against him, including assaulting a police officer and engaging in violence on restricted grounds with a dangerous weapon.

Webster said he was swept up in politics and former President Donald Trump’s rhetoric about a stolen election, but wished he’d never come to Washington.

“I should have not been there on Jan. 6 to protest the election and I wish the events of that horrible day had never happened,” Webster said through sniffles. “People would still be alive. People would not have gotten hurt. And families would not be torn apart.”

Webster apologized to D.C. Metropolitan Police Officer Noah Rathbun, whom he was convicted of attacking and choking.

“I want to apologize to you and most importantly your family,” Webster said. “I’m sorry.”

U.S. District Judge Amit Mehta said Webster threw away a lifetime of respect for 20 years as a police officer and for his Marine service because of 46 seconds of violence recorded outside the Capitol. Mehta said the case reflected aberrant behavior that continues to tear at the country’s fabric.

“Officer Rathbun was a victim that day. For sure. No doubt about it,” said Mehta, who said he took no pleasure in sentencing Webster to 120 months in prison. “The other victim was democracy and that is not something that can be taken lightly.”

The previous longest sentence for a Jan. 6 rioter was 87 months for Thomas Robertson, a former Virginia police officer, and Guy Reffitt, a Texas militia member. Mehta said Webster deserved a stiffer sentence because neither of them touched a police officer.

The next two longest sentences were 63 months in prison each for Mark Ponder and Robert Scott Palmer, who were charged separately for assaulting police.

Webster was convicted of pounding a Marine Corps flagpole against the bicycle rack, which officers used to protect the Capitol, hard enough to break the pole. Webster then tackled Rathbun and tried to tear off his helmet and gas mask, which choked Rathbun with the helmet’s chinstrap.

Mirell recommended a sentence of 210 months because of elements such as Webster’s service in the police and Marines meant he should have known better than to attack fellow officers. Mirell said Webster lacked remorse in comments Jan. 6 and under oath at trial.

“I feel like I was being kicked while I was on the ground,” Rathbun had testified at trial. “I mean, I know there were a lot of people standing around, but I’m not sure who was doing it.”

Webster wore a bullet-proof vest during the riot, which increased the sentencing guidelines by 6 years, Mehta said. The sentencing enhancement was longer than all but a few of the terms for Jan. 6 defendants so far, Mehta said.

“The consequence of the enhancement is extremely draconian,” Mehta said.

Webster also brought a Smith & Wesson Model 640 revolver to Washington, but left the gun at his hotel, according to court records.

Webster claimed self defense during his trial. He testified he thought Rathbun was a rogue cop who struck him rather than trying to calm the confrontation between police and the mob.

Webster’s lawyers wrote in a filing urging a shorter sentence that Trump’s “relentless disinformation campaign” about the 2020 election being stolen exerted tremendous influence over Webster and others.

But Webster is “deeply ashamed and remorseful for having participated in the Jan. 6 protest and violently attacking Officer Rathbun,” the lawyers wrote.

James Monroe, one of Webster’s lawyers, argued the sentence should be limited to the 420 days he served in home detention. Monroe said Webster wasn’t an organizer of the protest and served 20 unblemished years with the New York Police Department, so he shouldn’t be condemned to a lengthy sentence.

“That is not how we measure justice,” Monroe said. “That is revenge.”