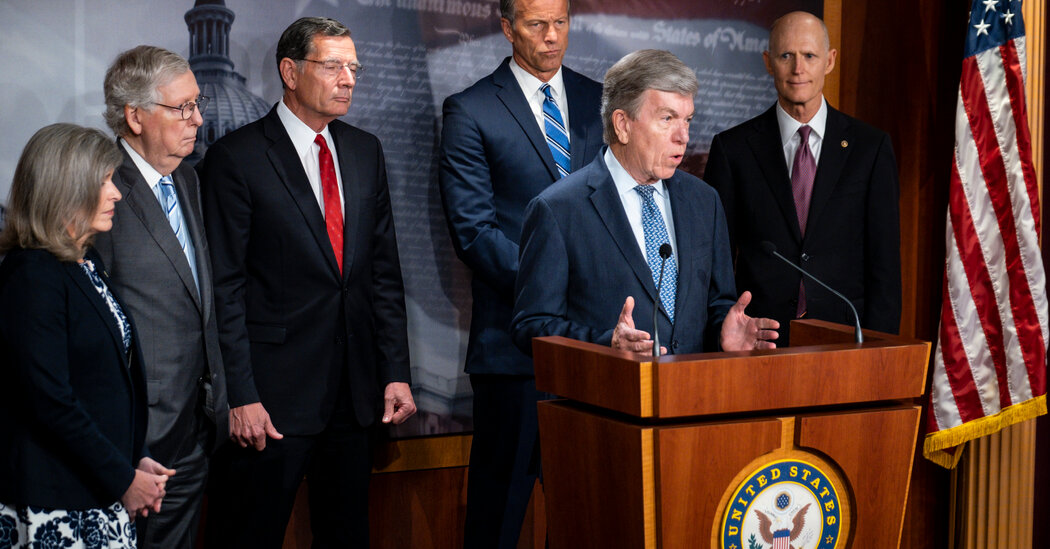 WASHINGTON — Headed into 2022, Republicans were confident that a red wave would sweep them into control of Congress based on the conventional political wisdom that the midterm elections would produce a backlash against President Biden, who has struggled with low approval ratings.

But now some are signaling concern that the referendum they anticipated on Mr. Biden — and the high inflation and gas prices that have bedeviled his administration — is being complicated by all-encompassing attention on the legal exposure of a different president: his predecessor, Donald J. Trump.

Those worries were on display on Sunday morning as few Republicans appeared on the major Washington-focused news shows to defend Mr. Trump two days after a redacted version of the affidavit used to justify the F.B.I. search of his Mar-a-Lago estate revealed that he had retained highly classified material related to the use of “clandestine human sources” in intelligence gathering. And those who did appear indicated that they would rather be talking about almost anything else.

Senator Roy Blunt, Republican of Missouri, acknowledged that Mr. Trump “should have turned the documents over” but quickly pivoted to the timing of the search.

“What I wonder about is why this could go on for almost two years and, less than 100 days before the election, suddenly we’re talking about this rather than the economy or inflation or even the student loan program,” Mr. Blunt lamented on ABC’s “This Week.”

“Former President Trump has been out of office for going on two years now,” he said on CNN’s “State of the Union.” “You think this is a coincidence just happening a few months before the midterm elections?”

The Aug. 8 search of Mar-a-Lago, which followed repeated requests over more than a year and a half for Mr. Trump to turn over sensitive documents he took when he left office, initially prompted most Republicans to rally around the former president, strengthening his grip on the party. Some reacted with fury, attacking the nation’s top law enforcement agencies as they called to “defund” or “destroy” the F.B.I. Others invoked the Nazi secret police, using words like “Gestapo” and “tyrants.”

But as more revelations emerge about Mr. Trump’s handling of some of the government’s most sensitive documents, some of those voices have receded.

The release on Aug. 26 of a partly redacted affidavit used by the Justice Department to justify its search of former President Donald J. Trump’s Florida residence included information that provides greater insight into the ongoing investigation into how he handled documents he took with him from the White House. Here are the key takeaways:

The government tried to retrieve the documents for more than a year. The affidavit showed that the National Archives asked Mr. Trump as early as May 2021 for files that needed to be returned. In January, the agency was able to collect 15 boxes of documents. The affidavit included a letter from May 2022 showing that Trump’s lawyers knew that he might be in possession of classified materials and that the Justice Department was investigating the matter.

The material included highly classified documents. The F.B.I. said it had examined the 15 boxes Mr. Trump had returned to the National Archives in January and that all but one of them contained documents that were marked classified. The markings suggested that some documents could compromise human intelligence sources and that others were related to foreign intercepts collected under the Foreign Intelligence Surveillance Act.

Prosecutors are concerned about obstruction and witness intimidation. To obtain the search warrant, the Justice Department had to lay out possible crimes to a judge, and obstruction of justice was among them. In a supporting document, the Justice Department said it had “well-founded concerns that steps may be taken to frustrate or otherwise interfere with this investigation if facts in the affidavit were prematurely disclosed.”

“Some of the president’s biggest cheerleaders — Marjorie Taylor Greene, Jim Jordan — have gone kind of silent,” Representative Adam Kinzinger of Illinois, an anti-Trump Republican, said on NBC’s “Meet the Press.” “That tells you all you need to know.”

As the Mar-a-Lago case has dominated the news this month, predictions about a Republican wave have weakened.

Privately, Republican strategists say they are downgrading their forecast of the party picking up as many as 30 seats in the House in favor of smaller gains.

The Cook Political Report projected in May that Republicans could gain as many as 35 seats in the House. Last week, the publication revised its projection to a more modest gain of 10 to 20 seats.

There are several reasons for the shifting forecast. Chief among them is the Supreme Court’s overturning of Roe vs. Wade, a decision that has galvanized Democrats and swing voters who want to preserve abortion rights.

But Republicans’ chances in the general elections have also seemingly been hampered by primary voters favoring weaker candidates who were endorsed by Mr. Trump.

Senator Mitch McConnell of Kentucky, the minority leader, recently lamented the “candidate quality” among Republican primary winners. He has said he now believes it will be more difficult for Republicans to flip the Senate than the House.

Other Republicans have been similarly direct in their comments, stating that the more Mr. Trump’s legal exposure is highlighted in the news, the worse their chances are.

Former Attorney General William P. Barr said last week on the “Honestly” podcast that he believes the Mar-a-Lago search “strengthens Biden and hurts the Republican Party going into the midterms because the focus once again returns to President Trump and his persona and his modus operandi rather than the pocketbook issues.”

That is not to say that no Republican defended Mr. Trump on Sunday.

Representative Michael R. Turner of Ohio, the top Republican on the Intelligence Committee, said on Fox News that he believed Mr. Trump’s handling of classified documents sounded “more like a bookkeeping issue than it is a national security threat, which means it doesn’t rise to the level of justifying raiding the former president’s home.”

But Chris Christie, the former Republican governor of New Jersey and erstwhile ally of Mr. Trump, disagreed, and argued more conservatives should condemn the mishandling of sensitive documents.

“It shouldn’t be a hard thing to say,” Mr. Christie said on ABC, adding, “That’s wrong for you to take top secret, classified documents back to your house.”