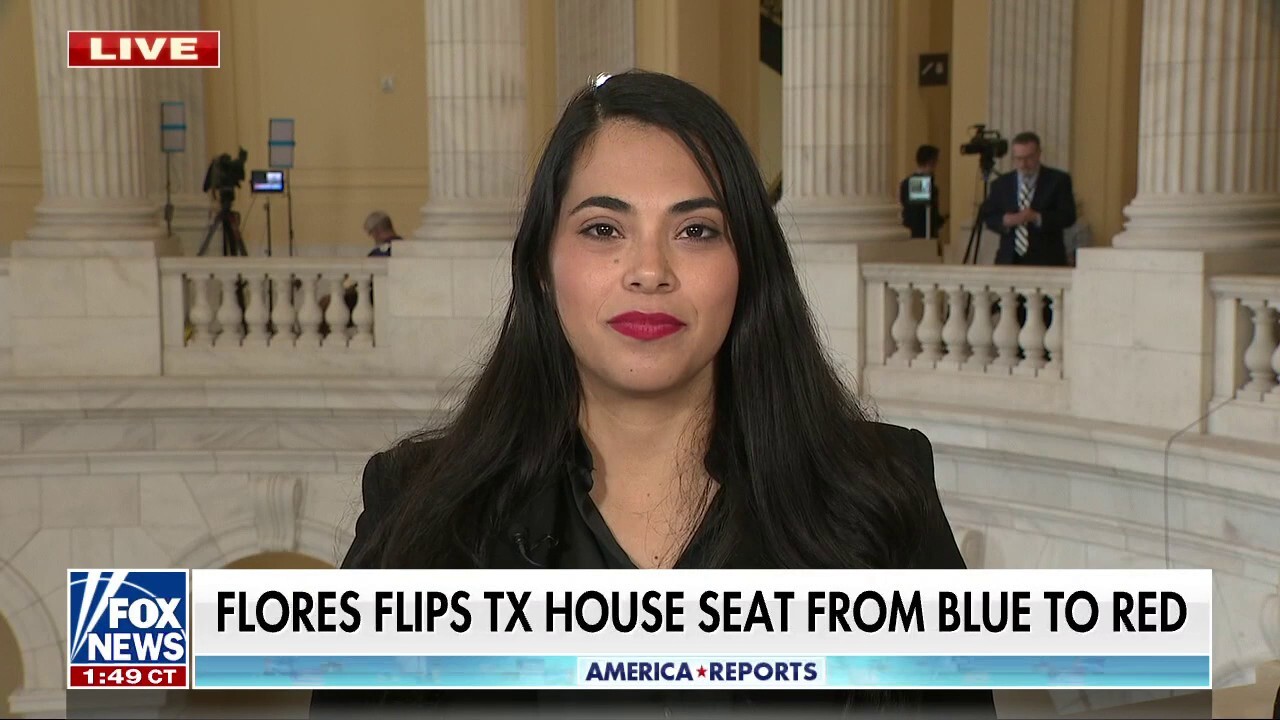 For too long, Republicans have pandered to Hispanics voters with promises of open borders and amnesty.

Ronald Reagan, George W. Bush and John McCain advocated for comprehensive immigration reform that would incentivize unending waves of illegal immigration. In 2013, the Republican National Committee doubled down on the identity politics with an autopsy of the 2012 midterm elections that concluded the GOP could win only with a softened stance on immigration, after Republicans half-heartedly embraced stronger borders that election cycle.

Rep. Mayra Flores, the first Mexican-born woman elected to Congress, and the first-ever Republican to represent the Rio Grande Valley, campaigned on liberating south Texas from the scourge of illegal immigration, human trafficking and criminal gangs.

Congresswoman Mayra Flores stands with her family after being sworn in by House Speaker Nancy Pelosi on June 21, 2022, in Washington.
(Brandon Bell/Getty Images)

“We must secure our borders and keep our families safe,” the wife of a Border Patrol agent promised. Her message of peace and prosperity for all families, regardless of skin color, alone can serve as the basis of winning over the hearts and minds of Latinos in battleground states.

The Democrats have made it a lot easier for Republicans to seal the deal with Hispanics, which could lead to a permanent shift of Hispanics to the party that shares their conservative principles of faith, family and community.

I witnessed Joe Biden struggle to gain traction with Hispanic voters when he appeased the radical Leftists that now control his party, abandoning our nation’s law enforcement heroes and small business owners in 2020.

At the Trump campaign, we built an aggressive media plan and launched an uplifting outreach effort that presented a clear choice to our growing Latino coalition: the American Dream or socialism. President Donald J. Trump made huge inroads with Hispanics in 2020, but that is just the beginning of the Latino red wave shaping the Republican Party as we head into the midterm elections this November.

The GOP and the conservative movement must continue to energize Hispanic swing voters and build a permanent coalition to win local, state and federal elections.

It’s easy to say that Democrats have taken the Hispanic community for granted, but it is more important to dig deeper into the suffering Biden’s destructive policies have caused Hispanics Americans. Before the COVID pandemic, more than 1.5 million Hispanic Americans were lifted out of poverty, the Hispanic unemployment rate hit a record low, and homeownership and household income among Hispanics hit record highs. Small business flourished as a result of Trump’s historic tax and regulatory agenda. School choice funding helped Hispanic American youth achieve a record high school graduation rate.

Biden received 66% of the Hispanic vote nationwide, but the state by state analysis tells a less impressive story. Biden performed better in liberal state like California, but bled support from Hispanics in Florida and Nevada. As the Biden presidency continues to flounder, Hispanic voters are losing confidence in this incompetent president. In a recent poll, Biden polled at a dismal 24% approval among Hispanics, with 54% disapproving. This poll is alarming for Democrats who have relied on Hispanics to build their coalition.

Higher food and gas prices are placing an enormous amount of financial strain on American families and inflation is one of the top issues driving their politics. In the recent Axios/Ipsos poll, 39% of Hispanics are worried about inflation and supply chain breakdown. Republicans are making gains with Hispanics who believe that they are better than the Democrats in handling the economy. Republican leaders like Florida Gov. Ron DeSantis have also benefited from Biden’s sluggish performance, with his favorability among Latinos jumping 10% between December 2021 and June 2022.

A microcosm of this phenomenon occurred in Virginia, where Glenn Youngkin made inroads into the Hispanic community by building a strong outreach program. Many Hispanics rejected the radical indoctrination in Virginia public schools, including promoting critical race theory and gender confusion. The “woke” politics from the extreme Left did not settle well with Hispanics. Their outrageous attempt to force Latinos to make their Spanish language more inclusive and embrace ridiculous terms like “Latinx” backfired. The extended COVID lockdowns in Democrat-run states also had devastating effects on the wellness, safety, development and growth of Hispanic children.

Hispanics are not single-issue voters. They care about restoring public safety in their communities. The recent Axios/Ipsos poll shows that 44% of Hispanics worry most about crime and gun violence. Biden’s radical lawlessness has created a national security crisis at the southern border and is driving Hispanic voters to the GOP. Biden has released over 1 million unvetted migrants into the American communities.

A Border Patrol agent stands on a cliff looking for migrants who crossed into the U.S. from Mexico near the city of Sasabe, Arizona, Jan. 23, 2022.
(Salwan Georges/The Washington Post via Getty Images)

Patriotic and law-abiding immigrants who enrich our nation do not appreciate the way that illegal immigrants are imposing tremendous economic and financial strains on low-income Americans. Democrats continue to embrace open borders even after the horrific human smuggling operation that killed 53 migrants in an overheated tractor-trailer.

Latinos will punish Democrats for handing over operation control of our border to the drug cartels. We will rebuke Biden for allowing human traffickers and MS-13 gang members to prey freely on our most vulnerable citizens.

The rise of conservative Latinas winning congressional primaries in Texas and Virginia signals a new generation of Republican leaders. They reject the Democrats’ anti-American narrative and instead want to share their great American story. Their voices can help the Republican Party better sell their message of love of country, protection of our God-given freedoms, and common sense America First policies. I am so inspired by these Latina leaders who will make a long-lasting impact in their districts, the Republican Party and the nation.

Latina victories are a win for all Americans who believes it is time to stand against the destructive agenda of the Democrat Party. We will not rest until every American child can obtain a quality education without Leftist’s indoctrination and every American family can live in a safe community.

Mercedes Schlapp is a Senior Advisor to Donald J. Trump for President Inc. and was formerly the White House Director of Strategic Communications in the Trump administration.