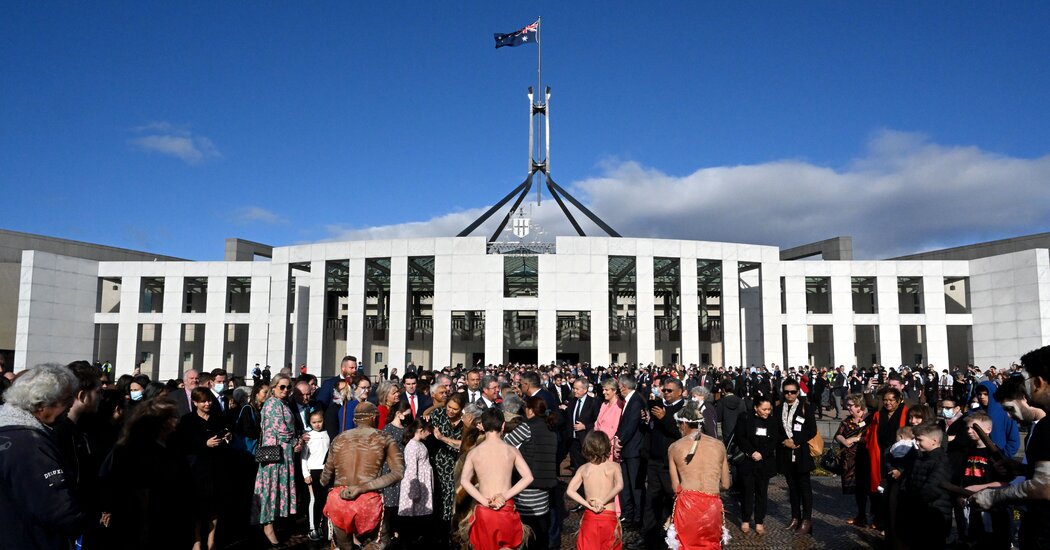 MELBOURNE, Australia — When Capt. James Cook sailed to Australia in 1768, he did so with instructions that he should “show every kind of civility and regard” to the land’s Indigenous people and get their consent before possessing their land. He did neither.

The brutal colonization that followed has set the tone for how Aboriginal people have been treated throughout the nation’s history. To this day, a treaty has never been signed with Aboriginal people, and they are not recognized in the Australian Constitution.

Now, a newly elected Labor government has started the process of repairing the open wound at the heart of the nation. Last month, Prime Minister Anthony Albanese kick-started the process of holding a referendum to enshrine in the Constitution a body to advise the government on Indigenous issues, to be known as the Aboriginal and Torres Strait Islander Voice.

“We are seeking a momentous change, but it is also a very simple one,” Mr. Albanese said in announcing the draft ballot question. “Enshrining a voice in the Constitution gives the principles of respect and consultation strength and status.”

In the month since, the prime minister has worked to build support for the referendum, consulting with Aboriginal leaders and even holding an unusual news conference on Saturday in Sydney with Shaquille O’Neal.

But the effort faces many challenges. After decades of stalled discussions about Indigenous recognition, the previous two conservative prime ministers opposed a referendum, and the current conservative political opposition has not yet said whether it will support the proposal. A referendum has never succeeded in Australia without bipartisan backing.

Critics have seized on the fact that Mr. Albanese has not yet fully explained what the Aboriginal voice would entail. He sought to answer the criticism on Saturday, saying that while it would ensure that Indigenous people were consulted on issues that affect them, it would not “usurp” Parliament.

Advocates say the proposal would be both a symbolic and structural change in a country that still struggles to acknowledge the bloodiest parts of its colonial history and the legacy of that past.

What Is the Voice?

The Voice to Parliament, its supporters say, is a simple proposal.

“What it’s saying is: You need to better include Aboriginal and Torres Strait people in political and legal decision-making in their own affairs,” said Dani Larkin, the deputy director of the Indigenous Law Center at the University of New South Wales.

The proposal is the result of a consultation process undertaken in 2017 by Indigenous leaders with Aboriginal communities around Australia. They sought to find a solution for the powerlessness, stemming from the history of colonization, that had entrenched disadvantage in their communities.

Given the absence of a treaty with Aboriginal peoples, “it was particularly cruel and unjust the way the dispossession happened here, and the lack of redress to this date has been appalling,” said Hannah McGlade, an associate professor of law at Curtin University and a member of the United Nations Permanent Forum on Indigenous Issues.

Indigenous people’s lives remain drastically worse than those of other Australians and are even deteriorating in some areas. Indigenous people have shorter life spans and poorer health. The gap between Indigenous and non-Indigenous people is “actually widening in relation to incarceration, child removal and suicide rates,” Professor McGlade said.

While symbolic gestures acknowledging Aboriginal peoples are common in Australia, much of the population is reluctant to do more. Last year, a proposal to include more Indigenous history in school curriculums was slammed by the education minister at the time as promoting an “overly negative view” of Australia.

Eddie Synot, a law lecturer at Griffith University who was involved in the proposal for the Voice to Parliament, said, “In Australia, there’s very much been an emphasis throughout our history on just assimilating into the rest of Australian society and forgetting the past.”

The proposal seeks to address the forces that relegate Indigenous people to second-class status. The plan developed by Aboriginal leaders, outlined in 2017 in a document called the Uluru Statement From the Heart, includes three demands: Voice, Treaty and Truth.

As for the other two pillars, “the treaty-making process will go some way to redress this wrongful acquisition of land,” she said, “and truth telling is fundamental because there is still such denial of the deep violence of our history — the violence of colonization, the systemic discrimination Indigenous people face today.”

Constitutional change is difficult in Australia. It can be done only through a referendum, one that requires a “double majority” — a majority of voters nationwide, as well as majority support in a majority of states.

When Malcolm Turnbull, the prime minister from 2015 to 2018, was in power, he said that there was not enough support among Australians to amend the Constitution on this issue, as critics voiced fears that a Voice to Parliament would act as a “third chamber of Parliament.” His successor, Scott Morrison, made a similar argument.

Mr. Albanese, who became prime minister in May, took a different view. Before the election, he promised that his Labor Party would put the Voice to a referendum.

The issue was about “common courtesy,” he said, which dictates that “where you are implementing a policy that affects a group — in this case the oldest continuous civilization on the planet, something we should be proud about — you should consult, you should involve them.”

That could be achieved, he said, by adding just three sentences to the Constitution, creating a Voice to Parliament whose composition, functions and powers would be decided by Parliament.

The simplicity of the proposal seeks to avoid the failings of Australia’s last referendum, in 1999, when a majority of the public supported the idea of making the country a republic but rejected the ballot question because of disagreements about the new model of governance.

But the lack of detail with the new referendum — whose date has not yet been set — has given critics an opening. A former conservative prime minister, Tony Abbott, said it meant that “a particular group will have an unspecified say over unspecified topics with unspecified ramifications.”

Anne Twomey, a constitutional expert at the University of Sydney, said that arguments framed around the need for more detail were often disingenuous.

If the debate stays in the realm of principles, where Mr. Albanese is trying to keep it, the referendum has a good chance of success, she said. But a debate about the details of the Voice and how it could be used in the future could prove more challenging.

Some Indigenous people say that no matter the details, a Voice to Parliament would not be enough.

“I really don’t see how this is going to bring justice to our people by providing advice,” said Lidia Thorpe, an Indigenous senator. “We’ve had many, many advisory bodies.”

Still, she said, if the referendum fails, “it will set Australia back as a nation, and it will have an impact on the health and well-being of First Nations people.”

Dr. Larkin, of the University of New South Wales, said that Australia should embrace its chance at a long-overdue reckoning with its treatment of Aboriginal people.