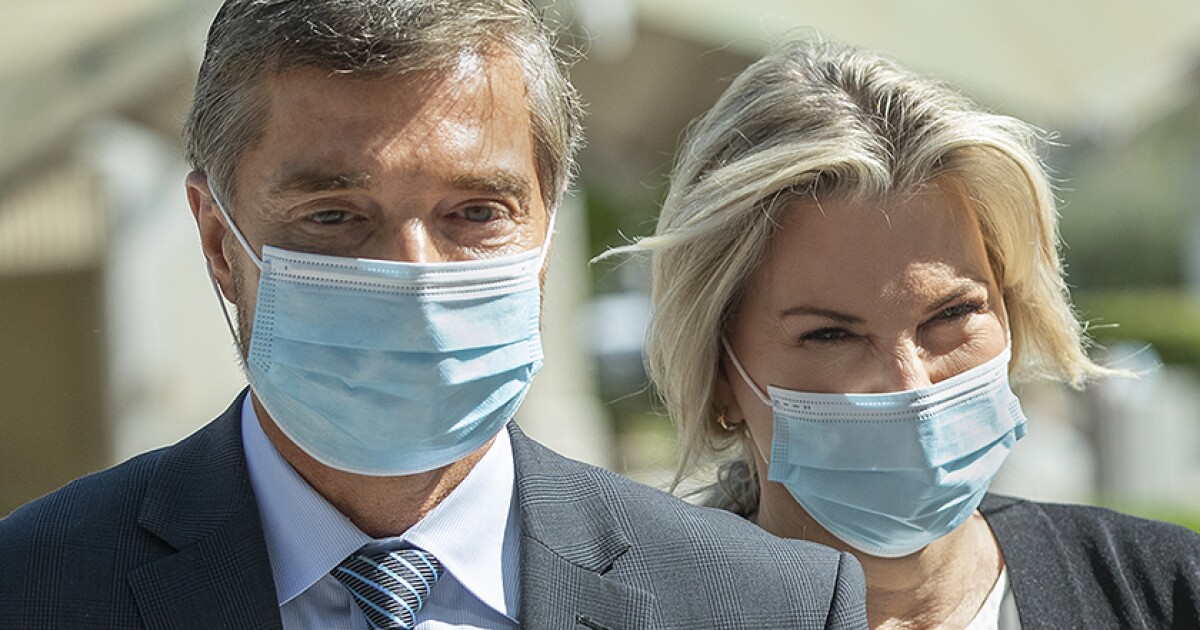 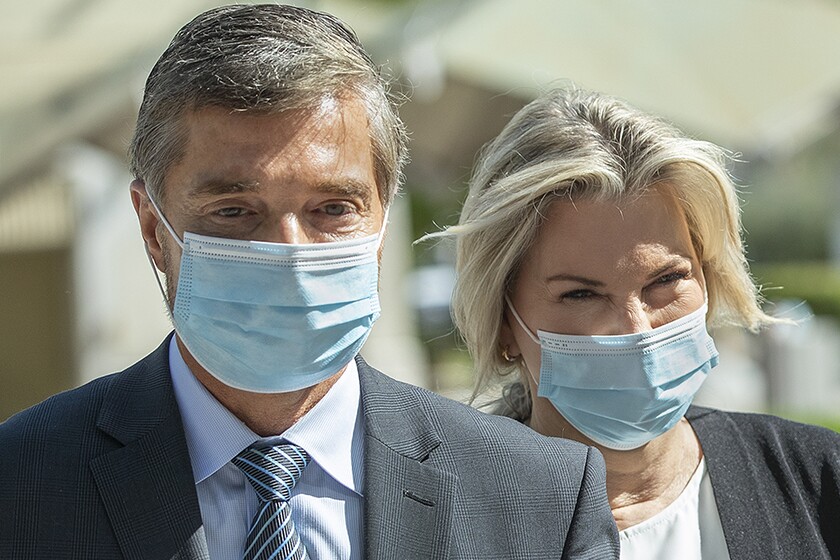 A Hidden Hills socialite must stand trial for the murder of two boys, a judge decided Thursday after hearing testimony that Rebecca Grossman struck the pair in a crosswalk while going more than 70 mph and continued driving.

Los Angeles County Superior Court Judge Shellie Samuels determined after a five-day preliminary hearing that there is sufficient evidence for Grossman to be tried on two counts of murder, two counts of vehicular manslaughter with gross negligence and one count of hit-and-run driving resulting in death.

Samuels’ decision came after what amounted to a mini-trial in which she heard tearful and graphic testimony from the children’s mother, Nancy Iskander, sheriff’s investigators and eyewitnesses.

Iskander recounted how she was crossing the street around 7 p.m. on Sept. 29, 2020, with three of her children when she heard the roar of engines and saw two SUVs barreling toward the marked crosswalk.

She grabbed her 5-year-old and dove to safety, but the next time she saw her two older boys — Mark, 11, and Jacob, 8 — they were nearly lifeless on Triunfo Canyon Road in Westlake Village.

Iskander testified the two SUVs “were zigzagging with each other as if they were playing or racing.”

Grossman was speeding behind another vehicle driven by former Dodger Scott Erickson, who earlier in the day had been drinking cocktails with Grossman at a nearby restaurant, sheriff’s officials said.

L.A. County sheriff’s investigator Scott Shean testified Wednesday that Grossman’s blood alcohol was 0.08%, the legal limit for intoxication in California. A cocktail waitress at Julio’s and a friend of the lawman’s told him they each had served Grossman margaritas in the hours before the fatal collision.

Afterward, Dmitry Gorin, one of Grossman’s lawyers, called Orange County lab criminalist Kelly Brown to testify. She said tests of Grossman’s blood alcohol level at her lab came back .074 and .073. Deputy Dist. Atty. Ryan Gould then asked whether it was possible for the alcohol content to decrease over time and the number to be lower in the Orange County test than what was done in L.A. Brown agreed it was.

To get a second-degree murder conviction, Gould must prove Grossman acted with implied malice and knew the act of driving more than 70 mph in a residential area was dangerous to human life.

John Dobson, one of Grossman’s attorneys, told the judge on the final day of the hearing that “the evidence supports we have a tragic traffic accident” but there was no implied malice and Grossman was not “driving with proximity attempt to kill.”

Shean testified Wednesday that in 2013, a California Highway Patrol officer pulled over Grossman after she was clocked going 92 mph on the 101 Freeway in Agoura Hills and warned her she could kill someone.

He said the officer recalled the incident because of Grossman’s comment: “He better hope he doesn’t need to come to the Grossman Burn Center for help.”

The 58-year-old is the co-founder of the Grossman Burn Foundation with her husband, Dr. Peter Grossman. His family created the renowned medical facility. Earlier in the hearing, another sheriff’s deputy testified that Grossman was ticketed for speeding on a nearby canyon road months before the fatal crash.

But Dobson pointed out Rebecca Grossman has no convictions for reckless driving or DUI. “We have two speeding tickets in this case,” Dobson said, referring to Grossman’s driving history.

“This isn’t a case of thoughtlessness, but selfishness,” Gould countered. “How could she not know driving at 81 mph … was extremely dangerous?”

Grossman faces 34 years to life in prison if convicted. She has pleaded not guilty and has been out of jail for more than a year on $2-million bail.

The five-day hearing began April 25 with Iskander describing the fatal collision and its aftermath. She said Jacob was lying near the curb, and down the road, Mark lay with his “arm broken” and “blood coming out his mouth. I see him every night.”

She testified that her 5-year-old son, Zachary, watched paramedics perform CPR on his brother Jacob. Mark died at the scene, and Jacob would die hours later at the hospital.

Iskander said she was on rollerblades along with Jacob, Zachary was on his scooter and Mark was on his skateboard, crossing the residential boulevard. Her husband and daughter were jogging nearby.

The distraught mother and other witnesses testified that neither Grossman’s white Mercedes-Benz nor Erickson’s black SUV stopped immediately after the collision.

Shean and other deputies later testified they found Grossman a third of a mile away, stopped at the curb saying she did not know why her air bag had been triggered.

The judge castigated Grossman’s attorneys for questioning Iskander. “You asked the mother of the children I think 12 times” did she see her children hit, when it was apparent they were there one second and gone the next.

Samuels also rejected arguments by Grossman’s lawyer to hear testimony that she had stopped on her own, not because the car ceased to function.

“The evidence is the defendant, after hitting the children, proceeded to the driveway. She did not come back. She did not turn around. She could have walked back to the scene. She hit and run, and that is what she did,” Samuels said. “She didn’t apply the brakes after she hit the children; that is hit-and-run.”

Seeking to show that Grossman did not flee, her lawyer played a recording in court of her speaking with a Mercedes operator after the vehicle’s safety system flagged she had had a collision. On the recording, an operator asks, “Did you hit something?”

“I don’t know,” Grossman says. “I was driving down the road [and] my bag exploded.”

When Grossman was connected by the Mercedes assistant to a 911 operator, she was asked whether she had been involved in a collision because there had been a crash in the area in which a vehicle had struck two children. “I don’t know what I hit,” she replies.

Grossman said that she had turned onto Triunfo and it was dark, and “all of a sudden, this bag exploded in my face.”

Samuels, however, ruled the air bag “didn’t [just] go off.” The judge said there were 14 ignition attempts after Grossman’s Mercedes stopped, so there is no other explanation than that she was trying to flee, making the case for a hit-and-run.

Deputy Robert Apodaca, who specializes in traffic crashes, testified that he calculated Grossman was driving 71.7 mph when she struck the boys and that the car computer showed 73 mph. Under cross-examination, he said the older child, Mark, was struck by the vehicle and thrown 254 feet, the farthest he has known a human to be tossed in a crash.

Data extracted from Grossman’s vehicle showed that she was flooring the gas pedal and had reached 81 mph about 1.5 seconds before the crash.

A crash expert also testified that had Grossman slowed from 73 mph — her speed about 550 feet from the crosswalk — to the posted limit of 45 mph, she would not have struck the children because they would have had a chance to make it to the curb safely.

The children’s father, Karim Iskander, said in an interview with The Times that an “adult making adult decisions at the wheel of a vehicle [and] going at extreme speed” on a street where children and family are known to be walking needs to be “held accountable” for her actions.

“Justice needs to be done,” Iskander said, and Grossman needs to be convicted of all charges against her.