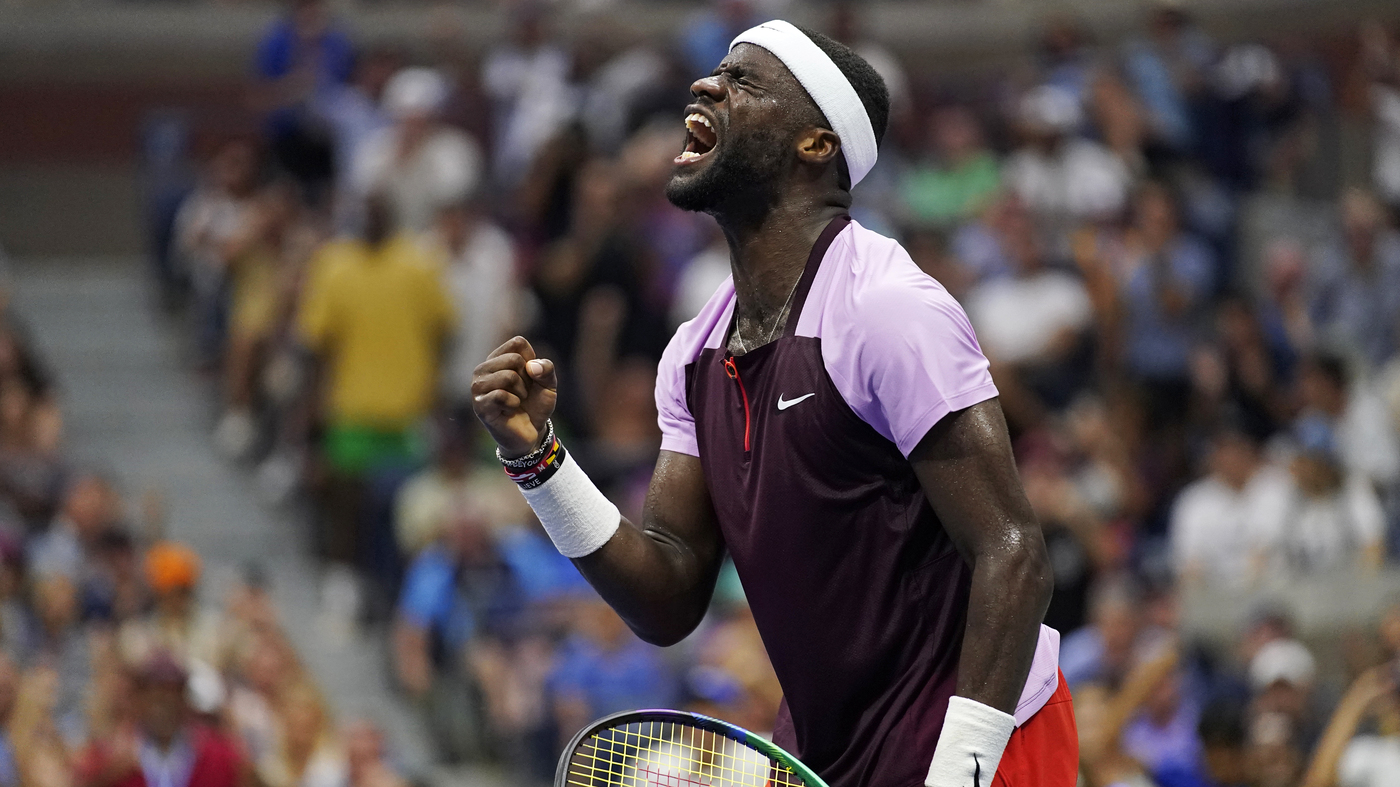 Frances Tiafoe of the United States celebrates after winning a point against Rafael Nadal, of Spain, during the fourth round of the U.S. Open tennis championships, Monday, Sept. 5, 2022, in New York.

Frances Tiafoe of the United States celebrates after winning a point against Rafael Nadal, of Spain, during the fourth round of the U.S. Open tennis championships, Monday, Sept. 5, 2022, in New York.

NEW YORK — Frances Tiafoe’s vision was blurry from the tears. He was thrilled — overwhelmed, even — when the last point was over and it hit him that, yes, he had ended Rafael Nadal’s 22-match Grand Slam winning streak Monday and reached the U.S. Open quarterfinals for the first time.

“I felt like the world stopped,” Tiafoe said. “I couldn’t hear anything for a minute.”

Then Tiafoe found himself “losing it in the locker room” when he saw that NBA superstar LeBron James gave him a Twitter shoutout.

What meant the most to Tiafoe about his 6-4, 4-6, 6-4, 6-3 victory over 22-time major champion Nadal in the fourth round at Flushing Meadows, though, was looking up in his Arthur Ashe Stadium guest box and knowing his parents, Constant and Alphina, were there.

“To see them experience me beat Rafa Nadal — they’ve seen me have big wins, but to beat those ‘Mount Rushmore’ guys? For them, I can’t imagine what was going through their heads,” said Tiafoe, a 24-year-old American seeded 22nd at the U.S. Open. “I mean, they’re going to remember today for the rest of their lives.”

His parents both emigrated to the United States from Sierra Leone in West Africa amid its civil war in the 1990s. They ended up in Maryland, where Constant helped construct a tennis training center for juniors, then became a maintenance man there; Alphina, Frances said, was “a nurse, working two jobs, working overtime through the nights.” Frances and his twin brother, Franklin, were born in 1998, and soon would be spending hour upon hour where Dad’s job was, rackets in hand.

Maybe one day, went the dream, a college scholarship would come of it.

“It wasn’t anything supposed to be like this,” Tiafoe said Monday evening, hours after by far his biggest victory.

He is the youngest American man to get this far at the U.S. Open since Andy Roddick in 2006, but this was not a case of a one-sided crowd backing one of its own. Nadal is about as popular as it gets in tennis and heard plenty of support as the volume raised after the retractable roof was shut in the fourth set.

“It’s something to tell the kids, the grandkids: ‘Yeah, I beat Rafa,'” Tiafoe said with a big smile.

He served better than No. 2 seed Nadal. More surprisingly, he returned better, too. And he kept his cool, remained in the moment and never let the stakes or the opponent get to him. Nadal, a 36-year-old from Spain, had won both of their previous matches, and every set they played, too.

“Well, the difference is easy: I played a bad match and he played a good match,” Nadal said. “At the end that’s it.”

This surprise came a day after Tiafoe followed along on TV as his pal Nick Kyrgios “put on a show” and eliminated No. 1 seed and defending champion Daniil Medvedev. That makes this the first U.S. Open without either of the top two seeded men reaching the quarterfinals since 2000, when No. 1 Andre Agassi exited in the second round and No. 2 Gustavo Kuerten in the first.

That was before Nadal, Novak Djokovic, who has 21 Grand Slam titles, and Roger Federer, who has 20, began dominating men’s tennis. Djokovic, 35, did not enter this U.S. Open because is not vaccinated against COVID-19 and was not allowed to enter the United States; Federer, 41, has undergone a series of operations on his right knee and last played at Wimbledon last year.

Now come the inevitable questions about whether their era of excellence is wrapping up.

“It signifies that the years go by,” Nadal said. “It’s the circle of life.”

Other men’s matches on Monday’s schedule: 2014 U.S. Open champion Marin Cilic vs. No. 3 Carlos Alcaraz, and No. 11 Jannik Sinner vs. Ilya Ivashka.

The No. 1 woman, Iga Swiatek, moved into her first quarterfinal at Flushing Meadows by coming back to beat Jule Neiemeier 2-6, 6-4, 6-0.

The 21-year-old from Poland will face another first-time U.S. Open quarterfinalist: No. 8 Jessica Pegula, the highest-ranked American woman, who advanced with a 6-3, 6-2 victory over two-time Wimbledon winner Petra Kvitova.

Another women’s quarterfinal will be two-time major finalist Karolina Pliskova against No. 6 Aryna Sabalenka.

Nadal won the Australian Open in January and the French Open in June. Then he made it to the semifinals at Wimbledon in July before withdrawing from that tournament because of a torn abdominal muscle.

Nadal competed only once in the 1 1/2 months between leaving the All England Club and arriving in New York, where he has won four trophies.

He tweaked his service motion, tossing the ball lower than he normally does so as not to put as much strain on his midsection. There were plenty of signs Monday that his serve was not in tip-top shape: nine double-faults, a first-serve percentage hovering around 50%, five breaks by Tiafoe.

Earlier in the tournament, he lost the first set of his first-round match. Did the same in the second round, when he also accidentally cut the bridge of his nose and made himself dizzy when the edge of his racket frame bounced off the court and caught him in the face.

Still, one Monday, Nadal appeared on the verge of turning things around when he broke early in the fourth set and went ahead 3-1.

Tiafoe told himself: “Stay in it. Stay with him.”

That’s tied to two key areas Tiafoe credits with helping make him a stronger player of late: an improved in-match mindset and a commitment to fitness.

“Rafa is there every point. I’ve been known to have some dips in my game at times, where it’s like you’re watching (and thinking), ‘What’s that?!'” Tiafoe said. “That was my thing, match intensity.”

No concern now: He grabbed the last five games. The next-to-last break came for a 4-3 edge in the fourth set, when Nadal put a backhand into the net, and Tiafoe skipped backward toward the sideline for the ensuing changeover, his fist raised.

Fifteen minutes later, Tiafoe broke again, and it was over. This represents the latest significant step forward for Tiafoe, whose only previous trip to a Grand Slam quarterfinal came at the 2019 Australian Open — and ended with a loss to Nadal.

When one last backhand by Nadal found the net, Tiafoe chucked his racket and put his hands on his head. He looked toward his guest box in the stands — Mom, Dad, brother, girlfriend, Washington Wizards All-Star Bradley Beal, others — then sat in his sideline chair and buried his face in a towel.

“It was just wild. My heart is going a thousand miles an hour. I was so excited. I was like: Let me sit down,” Tiafoe said. “Yeah, I’ve never felt something like that in my life, honestly.”