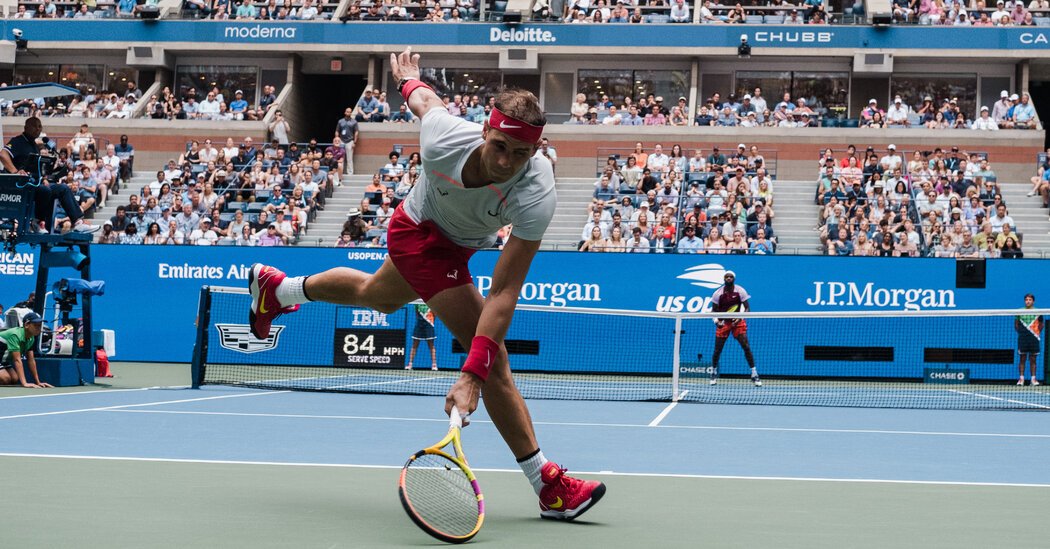 Rafael Nadal clenched his fists and roared at the U.S. Open on Monday.

He had just broken Frances Tiafoe’s serve to take a 3-1 lead in the fourth set, reclaiming the momentum against an inspired, much younger American opponent who had cracked before with a major upset in reach.

It looked, from long and recent experience, as if Nadal was teeing up another comeback victory in a career defined by in-the-moment grit.

But a strange thing happened on the way to another revival. Nadal lost his serve and his way in the next game under the closed roof of Arthur Ashe Stadium, and though he still scrapped and whipped his trademark topspin forehand, he was ultimately unable to avoid an unpleasant fourth-round surprise.

“I played a bad match, and he played a good match, and at the end, that’s it, no?” Nadal said at a news conference afterward. “I was not able to hold a high level of tennis for a long time. I was not enough quick on my movements. He was able to take the ball too many times very early, so I was not able to push him back.”

As Nadal, cleareyed in victory and defeat, pointed out, tennis matches often come down to court position.

Tiafoe spent most of the match on or inside the baseline, taking quick cuts and finishing with 49 winners. Nadal spent too much of the match well behind the baseline, sprinting to the corners and lunging to extend rallies (or not). His game lacked spark and depth.

If you lose the battle of position, Nadal said, “you need to be very, very quick and very young.”

Then Nadal, 36, smiled, not because he was content but because he had set up his next line.

“I am not in that moment anymore,” he said.

This was Nadal’s earliest defeat at a major tournament in more than five years and the first time he had been beaten in any major in 2022, a strange and potent brew of a season full of unexpected joy and pain.

Serena Williams at the U.S. Open

The U.S. Open was very likely the tennis star’s last professional tournament after a long career of breaking boundaries and obliterating expectations.

This should go down as one of Nadal’s greatest campaigns, not his most complete season but the year he took the lead over his longtime rivals Roger Federer and Novak Djokovic in the chase to finish with the most Grand Slam singles titles.

Nadal won his 21st at the Australian Open and his 22nd at the French Open and came within striking range of his 23rd at Wimbledon before an abdominal injury forced him to retire before the semifinals.

That injury cost him preparation time ahead of the U.S. Open. He played just one official match before New York, losing to Borna Coric in the round of 32 at last month’s Western and Southern Open.

But Nadal, so familiar with the comeback trail, was able to train with full intensity in Ohio, pushing himself on the practice courts with coaches Marc Lopez and Francisco Roig and doing the same in New York after Carlos Moya, the lead member of his coaching team, arrived.

Nadal has triumphed without ideal preparation throughout 2022. He arrived in Australia in January having played only one official tournament in the previous seven months because of the chronic foot condition that has troubled him, off and on, since his late teens.

But he worked his way into the Australian Open and rallied from a two-set deficit to defeat Daniil Medvedev in a 5 hour 24 minute test of endurance and resilience in the final.

“If we put everything together, the scenario, the momentum, what it means,” he said in Melbourne, long after midnight, “yeah, without a doubt probably have been the biggest comeback of my tennis career.”

He kept rolling, winning 20 straight matches in all before sustaining a freak injury in March in the semifinals of the BNP Paribas Open in Indian Wells, Calif., on a blustery afternoon against a much younger Spanish star, Carlos Alcaraz.

In an intense, physical duel in which last-second swing adjustments were often necessary in the high winds, Nadal sustained a stress fracture in his rib cage. Though he somehow reached the final, losing to Taylor Fritz, the new injury cut short his preparation for his beloved clay-court season.

When he returned, his foot pain resurfaced. After losing to Denis Shapovalov at the Italian Open in mid-May, he looked as gloomy as he had ever looked in the aftermath of a defeat, talking openly and grimly about the prospect of tennis no longer being worth the trouble or the pain.

But after mulling retirement for the second time in a year, Nadal found a way — with the help of regular painkilling injections — to win his 14th French Open. Then he found a way to resolve the pain on a longer-term basis by undergoing a procedure in which radio waves were used to deaden the nerves in his foot before Wimbledon.

“Of course Tiafoe is playing more solid than before, serving well I think today, taking the ball very early,” Nadal said. “Good backhands. He’s quick, as everybody knows. But I don’t think I pushed him enough to create in him the doubts that I need to create. Tennis is always a balance. When somebody’s not playing that well, it’s easier that the opponent plays better. If my ball is not a high-quality ball, then he’s able to do his game much easier.”

After winning the 2019 U.S. Open — in another gritty five-set final against Medvedev — Nadal sat courtside and cried in Arthur Ashe Stadium as he watched a video tribute that showed footage of his 19 major victories.

His count is now up to 22, one ahead of Djokovic, who won the Wimbledon title this year but who, as a foreigner unvaccinated for the coronavirus, was not permitted to enter the United States to take part in this U.S. Open.

As in the pandemic year of 2020, when Nadal and Federer were absent in New York and Djokovic was defaulted after striking a ball and inadvertently hitting a lineswoman in the throat, there will be no member of the Big Three in the final eight at the U.S. Open.

“Fifteen minutes after losing at the last Grand Slam tournament of the year, everything is dark, but that’s normal,” Nadal said in Spanish. “Then time passes and there’s no solution but to continue, and in the end, I know I have the interior strength to do it.”

Nadal and his wife Maria Francisca are expecting their first child later this year, but for now, the Big Three plan to reassemble later this month, competing for Team Europe in the Laver Cup in London, along with Andy Murray. But the path to the more prestigious title in New York is now open to another generation of contenders, including the 27-year-old Kyrgios and 24-year-old Tiafoe.

It is not quite here in earnest: Djokovic, 35, just won Wimbledon and will presumably be hungry for more success if he can play a fuller schedule in 2023. Nadal holds two of the four majors and will reclaim the No. 1 ranking at age 36 if neither Alcaraz nor the young Norwegian Casper Ruud reach the U.S. Open final.

But a new era is surely on the horizon. Consider this tournament — and days like Monday — a sneak preview.