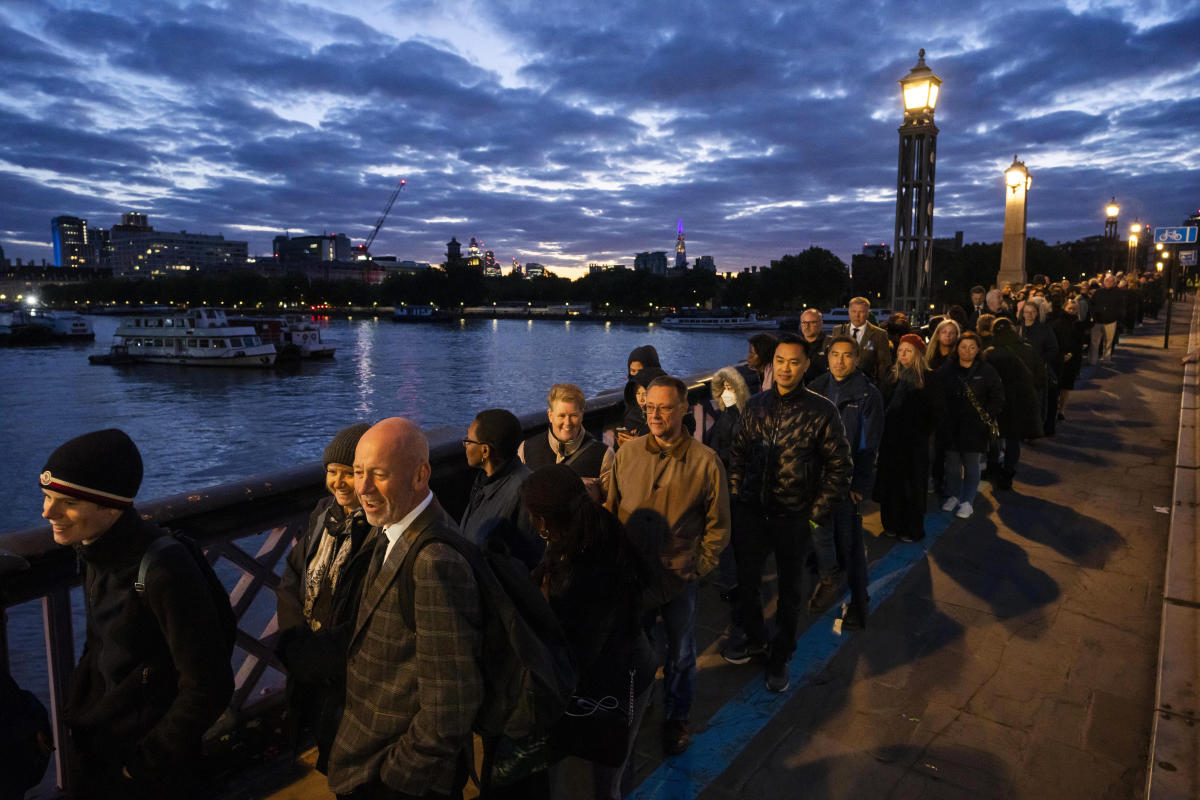 LONDON (AP) — The flood of grief from the death of Queen Elizabeth II forced the British government to call a temporarily halt to people joining a miles-long line to file past her coffin as it lay in state Friday, hours before King Charles III and his siblings were to stand vigil in the historic Westminster Hall.

A live tracker of the queue said it was “at capacity” and entry was being “paused” for six hours as waiting times reached 14 hours and the line stretched 5 miles (8km) from Parliament to Southwark Park in south London and then around the park.

Caroline Quilty of London said that she got to the line around 4 a.m. Friday.

“I think it is a moment in history, and if I did not come and celebrate it and see it and be part of it, I think I would really regret it,” she said.

Meanwhile, a delegation of Chinese officials reportedly was barred from visiting the historic hall in the Houses of Parliament where the late queen’s coffin is lying in state, as geopolitics cast a shadow over the solemn pageantry surrounding the monarch’s death.

The Chinese ambassador to the U.K. has been banned from Parliament for a year after Beijing sanctioned seven British legislators last year for speaking out against China’s treatment of its Uyghur minority in the far-west Xinjiang region.

The office of House of Commons Speaker Lindsay Hoyle declined to comment Friday on a report by American news outlet Politico saying the Chinese delegation would not be allowed into Westminster Hall.

In Beijing, Chinese Foreign Ministry spokesperson Mao Ning said she had not seen the Politico report but that as host of the queen’s funeral, the U.K. government should “follow the diplomatic protocols and proper manners to receive guests.”

A Chinese delegation is expected to attend the queen’s Monday funeral, which is in Westminster Abbey church and not Parliament. Organizers of the funeral have not published a guest list, and it was unclear who from China might attend.

The sanctioned British legislators wrote to officials this week to express concerns about the Chinese government having been invited to send representatives to the queen’s state funeral.

Conservative lawmaker Tim Loughton told the BBC that the invitation to China should be rescinded, citing the country’s human rights abuses and treatment of Uyghurs.

After a day out of the public eye Thursday, King Charles III was traveling to Wales on Friday on the final leg of his tour of the nations that make up the United Kingdom in the aftermath of the death of his mother last week after 70 years on the throne.

Charles, who for decades before his accession to the throne was the Prince of Wales, visits Llandaff in Cardiff for a service of prayer and reflection in honor of his late mother and will receive condolences from the Welsh parliament, the Senedd.

Charles returns to London later Friday and will briefly stand vigil at his mother’s coffin in the evening with his siblings, Princess Anne, Prince Andrew and Prince Edward.

A day later, all eight of Queen Elizabeth II’s grandchildren are expected to stand vigil beside her coffin for 15 minutes.

William, who after his grandmother’s death and his father becoming king is now the heir to the throne, is set to stand at the head of the coffin and Harry at the foot. Both princes, who are military veterans, will be in uniform.

Most senior royals hold honorary military roles and have worn uniforms at events to commemorate the queen. Harry, who served in Afghanistan as a British army officer, wore civilian clothes during the procession of the queen’s coffin from Buckingham Palace because he no longer a working member of the royal family. He and his wife Meghan quit royal duties and moved to the United States in 2020.

The king requested both William and Harry wear uniforms at the Westminster Hall vigil.