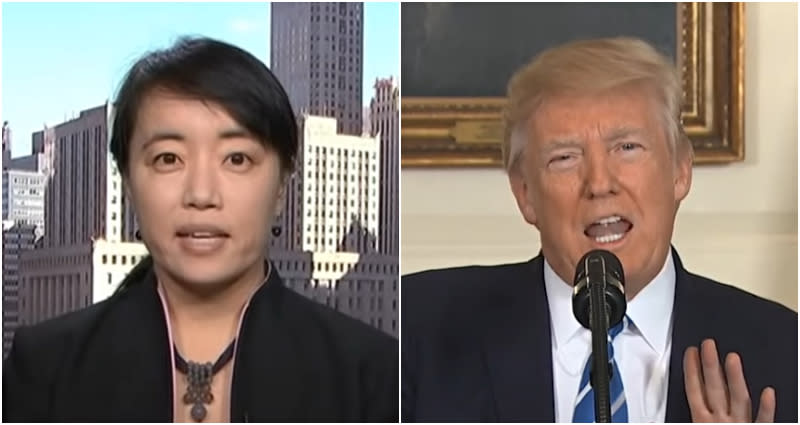 An Asian American psychiatrist who made assertions about former President Donald Trump’s mental health has failed to get her gig back at Yale University.

In a federal lawsuit filed last year, Dr. Bandy Lee accused Yale of unlawful termination “due to her exercise of free speech about the dangers of Donald Trump’s presidency.” She sought reinstatement and damages from lost income, emotional distress and harm to reputation, among other claims.

Lee took up an unpaid, voluntary position at Yale for 17 years, a gig she described to be worth “thousands, if not tens of thousands of dollars” in benefits, privileges and opportunities that allowed her to consult around the world. She gained public attention in 2017 after organizing an ethics conference that eventually led to the publication of a book titled “The Dangerous Case of Donald Trump: 27 Psychiatrists and Mental Health Experts Assess a President,” which became a New York Times bestseller.

Lee called Trump “delusional” and blamed him for spreading a “shared psychosis” among his followers, according to the Hartford Courant. Dr. John Krystal, who heads Yale’s psychiatry department, said Lee has taken the position that she has a “duty to warn” people that Trump presents a threat to public safety.

Yale apparently moved to terminate Lee after Alan Dershowitz, a department professor who had also been part of Trump’s legal team, reported her for “diagnosing” him as “psychotic” in public. That “diagnosis” came in comments made by Lee in response to a tweet he made, which she compared to Trump’s language and cited as a case of “shared psychosis.”

Ultimately, Yale said the reason it terminated Lee was due to her lack of a formal teaching role. However, the university had also questioned her judgment, professionalism and fitness to teach in the past due to her comments about Trump.

On Tuesday, U.S. District Judge Sarah Merriam dismissed Lee’s lawsuit since there was no guarantee that Yale would have reappointed her, regardless of her qualifications. Lee’s claim of a free speech violation under Connecticut’s employment law also fell flat, since she was not officially employed in the first place.

Lee responded by saying that she was not surprised by the ruling. However, she plans to continue to fight “since my reason for launching the lawsuit in the first place was for the public good.”

For this reason, Lee is looking to appeal. She is placing her faith in discussions about the Goldwater rule, an American Psychiatric Association (APA) policy that discourages psychiatric professionals from commenting on the mental health of influential figures.

However, Lee has not been with the APA since 2007. Theoretically, this means that the rule does not apply to her and that Yale should not have used it against her.

“I was hoping that this would be an occasion for discussion about Goldwater, but that appears to be avoided at all costs,” Lee told Yale Daily News of the recent ruling. “I won’t give up.”