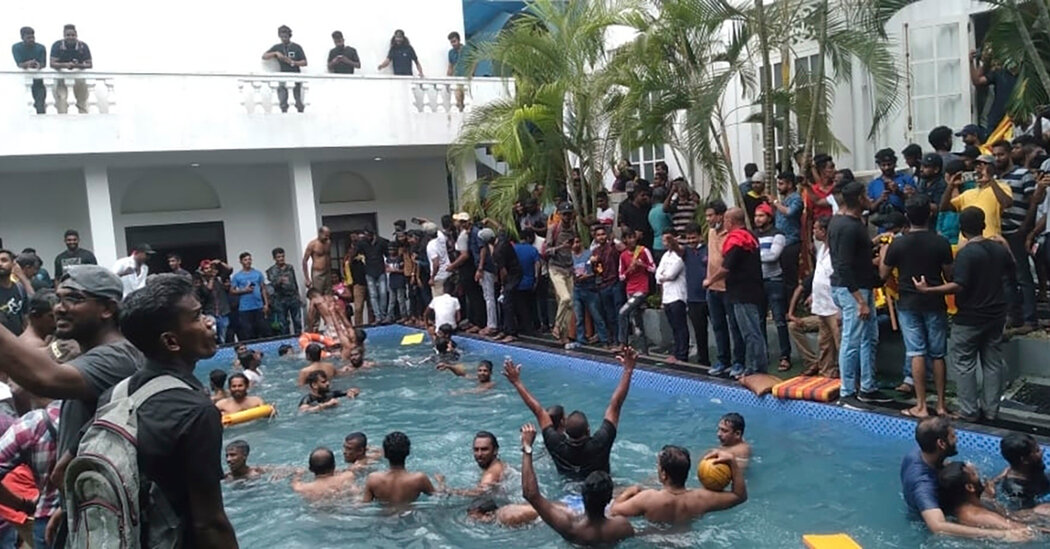 They did flips into the pool. They lounged on canopied beds. And on wide-screen televisions, they watched cricket and news footage of their fellow protesters, who had massed in Sri Lanka’s capital and joined them in storming the presidential residence and secretariat.

After months of growing economic deprivation, of fuel and food shortages and increasingly desperate protests, the live images from Colombo showed a rare moment of levity, as demonstrators who literally occupied the seats of executive power took a moment to appreciate the luxuries.

In the official residence of President Gotabaya Rajapaksa, who had fled to an unknown location the day before, the protesters swam in the clear blue water of an outdoor pool, while others crowded around the edges. Some found a gym, where they watched as one man did curls on a bench. Others rested on the grass in well-manicured gardens.

The demonstrators crowded onto stairways and took photos of themselves in the vast foyers of the residence, which served as the official home to British governors during the colonial era. A few people cooked curries and snacks for the protesters, while others showered in the bathrooms or posed for photos at desks.

Carrying Sri Lankan flags, chanting denunciations of Mr. Rajapaksa and his powerful family, they piled onto beds and sofas to celebrate the news that the president had been asked to step down and to ponder what might come next for their country.