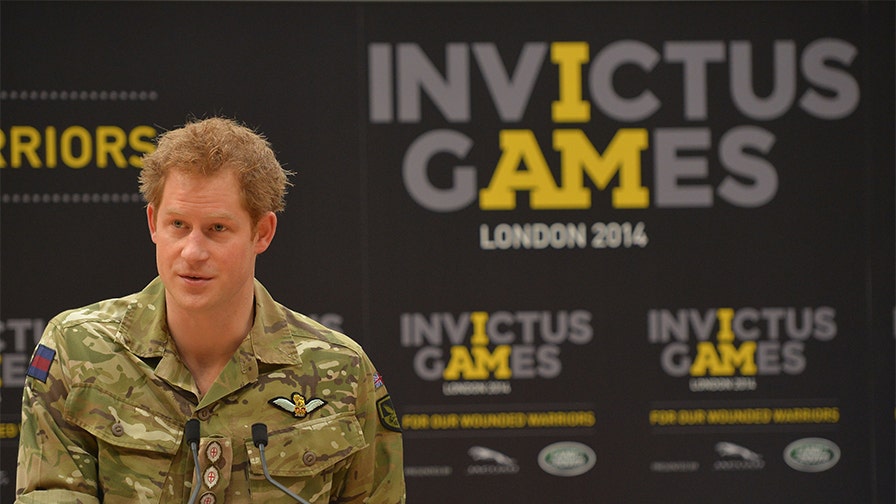 Prince Harry showed his support for former Royal Marine Lee Spencer, who is an amputee, after he was unable to complete a triathlon challenge due to ‘excruciating pain.”

On Tuesday, Spencer shared an Instagram video from a Zoom call between himself and the Duke of Sussex, in which Harry consoled and praised the veteran.

Spencer had aspired to swim 22 miles, cycle 1,060 miles, and hike 45 miles across the United Kingdom before he withdrew from the challenge during the cycling leg after experiencing pain.

Prince Harry showed his support for an amputee former Royal Marine, who was unable to complete a triathlon challenge due to ‘excruciating pain.’
(Photo by Jordan Strauss/Invision/AP, File)

“You basically circled the whole of the U.K. and climbed two mountains, and after that, and only after that, did your stump start to give you a few issues to the point where you had to pull out of the very last phase of it,” Harry told Spencer from his home in Montecito, California.

He continued, “But you put so much into this. I hope that you’re really happy, I know you’re not happy, but I hope that you feel really proud of yourself to have done what you’ve done.”

Harry added, “And I don’t dare ask what’s next or whether this is now the goal – this is the task to complete this challenge.”

“For me, it’s always been about getting the message out, not only for my disability but to keeping wounded, injured service men and women in the nation’s consciousness,” Spencer said. “They’re the two things that are primary.”

Spencer went on to say that he was “almost certainly going to try this again”  but he would approach the cycling leg of the challenge “differently.”

“I have to do something that I think matters,” he said.

On Tuesday, Lee Spencer shared an Instagram video from a Zoom call between himself and the Duke of Sussex, in which Harry consoled and praised the veteran. Prince Harry is pictured here on August 2, 2013.
(Mark Cuthbert/UK Press via Getty Images)

Harry noted that “there’s scale of things that matter.”

He observed that Spencer had “started so extreme” but there was a “whole list of options” that he could explore.

“You might not have completed this one but you certainly achieved it in my mind, so well done, thanks for spending the time to have a chat with me,” Harry said.

“It’s good to see you looking so well and healthy and happy and smiley keep me posted  “I’m already excited about the next adventure — little adventure, not massive.”

Spencer expressed his gratitude for Harry’s words of encouragement in a lengthy caption that accompanied his Instagram video.

“I’m so lucky to have the support of the Duke of Sussex, and was bowled over when he called me for a chat when I ended the triathlon,” he wrote.

“It didn’t finish the way I’d hoped and I was bitterly disappointed, feeling that I had let my team and everyone who had supported me down. But his very kind words have helped me to process that disappointment and start to see a lot of positives.”

The Duke of Sussex previously displayed his support for the former Marine in 2016 when he surprised Spencer’s all-amputee rowing team with an encouraging call during their record-breaking crossing of the Atlantic Ocean.
(Photo by John Stillwell/PA Images via Getty Images   )

He continued, “When you put your head above the parapet and attempt something that no one, either able-bodied or disabled, has tried before, then there’s a chance that it won’t work out the way you wanted or planned.

“I will continue to prove that no one should be defined by disability and keep wounded and injured servicemen and women in the nations conscience.”

The former serviceman concluded his caption with an invitation for Harry, writing, “And, I am sorry, Sir, because I can’t promise my next challenge won’t be as extreme, but perhaps next time you’ll join me!”

Spencer served 24 years as a Royal Marine Commando for 24 years, during which he survived on three operational tours in Afghanistan.

In 2014, he lost his right leg after he stopped to assist with a traffic accident that occurred in the British county of Surrey.

Prince Harry also has a military background, having served for 10 years in the British Royal Army. He completed two tours of duty in Afghanistan and rose to the rank of captain before leaving the armed forces in 2015.

Harry previously displayed his support for Spencer in 2016. The former Marine was a member of a four-person rowing team of disabled veterans. They became the first all-amputee team to row across an ocean when they crossed the Atlantic Ocean in 46 days.

During their voyage, Prince Harry, whose Invictus Games Foundation backed their mission and recovery, made a surprise call to encourage the crew.

Ashley Hume is an entertainment writer for Fox News Digital. Story tips can be sent to [email protected] and on Twitter: @ashleyhume