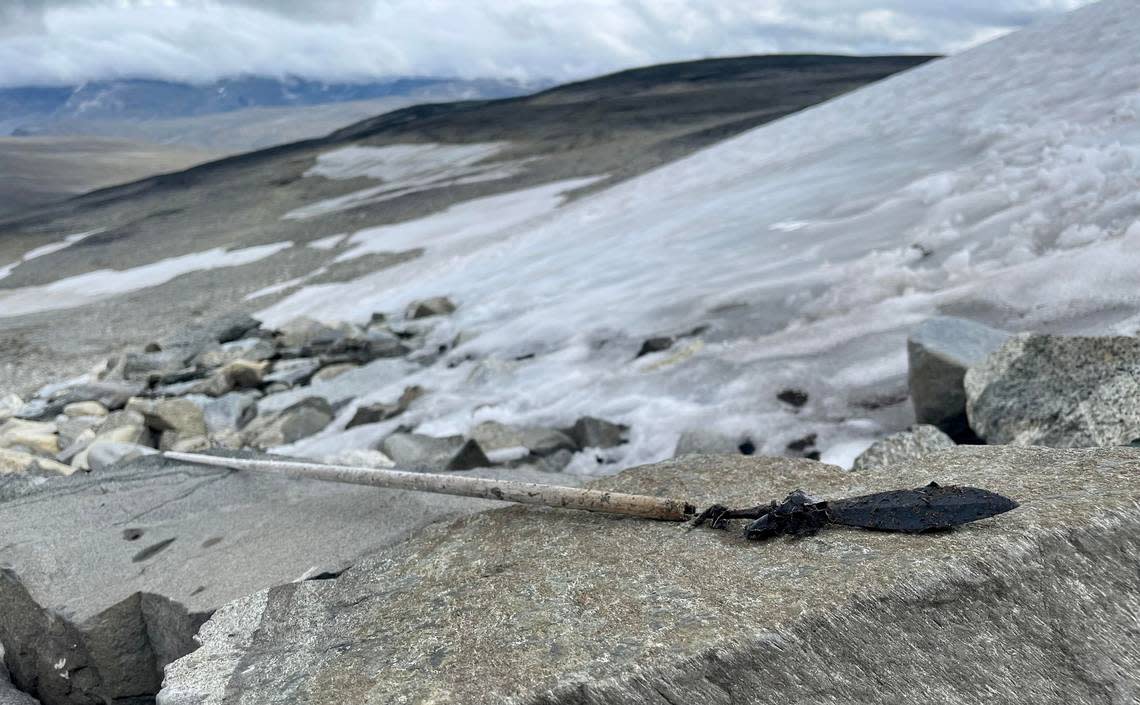 A research team from the Secrets of the Ice Glacier Archaeology Program set out with their eyes on a new ice patch in the Jotunheimen Mountains in Innlandet County, Norway, the program posted on Facebook on Aug. 17. The spot, about 240 miles northwest of Oslo, was once a reindeer hunting site.

Their expedition to survey the former hunting site exposed by melting ice led to multiple discoveries.

Wedged partially underneath a pile of loose stones on the edge of the ice, researchers found a 1,500-year-old arrow, they announced on Aug. 18.

Shortly after, they found another arrow lost during the early Viking Age with an iron arrowhead and the complete shaft, researchers posted on Aug. 20. The arrow’s shaft had a wooden notch carved at the end for hunters to balance the arrow on a bow, photos showed.

As the search continued, they discovered something even rarer: a three-bladed arrow.

“We have never found an arrowhead like this before,” the team posted on Aug. 25. “The last person who touched it was a Viking.”

“This type of arrowhead is known, but it is rare,” Lars Pilø, co-director of Secrets of the Ice, told Science Norway.

All three arrows were likely lost “when the hunters missed the reindeer and the arrows disappeared into the snow,” Pilø told Newsweek. “A missed shot, but an archaeological bull’s eye.”

“The ice works like a giant deep freezer and can preserve the artifacts in a pristine conditions, like they were lost yesterday,” Pilø told McClatchy News. “Once they melt out though, the clock starts ticking fast. We need to search for and rescue these artifacts before it is too late.”

This particular former reindeer hunting ice patch, which Arkeo News identified as the Langfonne ice patch, has “dramatically” melted in recent years. “Its current size is less than 30% of what it was 20 years ago,” the outlet reported.

“I would say it is off the charts compared to anything we’ve ever measured before,” a glaciologist at ETH Zurich told The Washington Post. Glaciers across the Alps have shrunk dramatically after a mild winter and the above-average temperatures of the region’s summer heat wave, experts explained to the outlet.

In the Alps, melting glaciers have exposed human remains — likely from lost hikers — and the remnants of a 1968 plane crash, The Guardian reported.

Across Europe, the months of below-average rainfall and above-average temperatures have caused a heat wave and drought, leaving almost two-thirds of the continent under drought warning or alert conditions. Pieces of long-lost history — such as the Elbe River’s “hunger stones” or the Lima River’s Roman ruins — have surfaced in parched waterways.

Unfortunately, the region’s drought is far from over with experts predicting that drought conditions will continue — and likely worsen in some regions — until November, according to a recent European Union report.