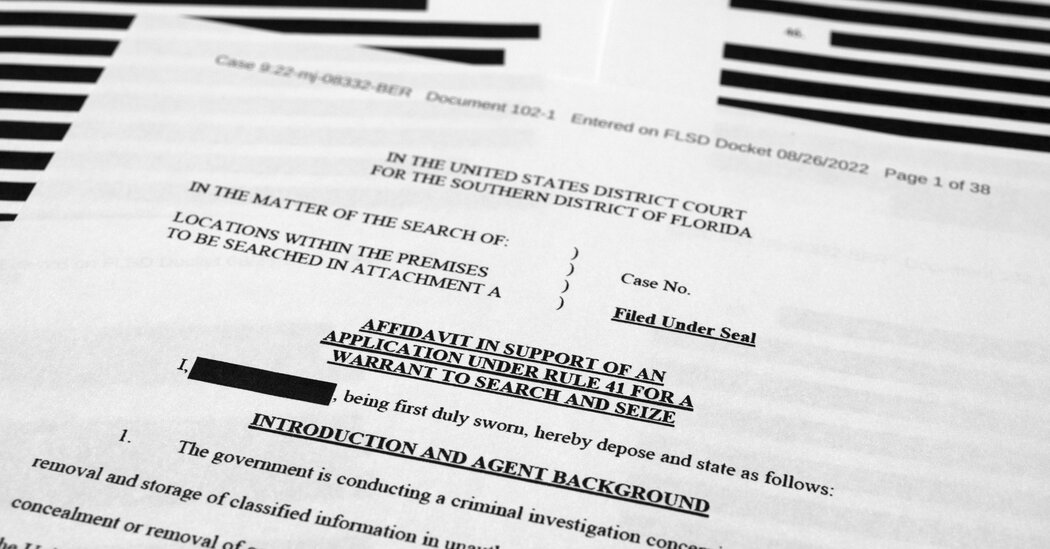 WASHINGTON — When the Justice Department proposed redactions to the affidavit underlying the warrant used to search former President Donald J. Trump’s residence, prosecutors made clear that they feared the former president and his allies might take any opportunity to intimidate witnesses or otherwise illegally obstruct their investigation.

“The government has well-founded concerns that steps may be taken to frustrate or otherwise interfere with this investigation if facts in the affidavit were prematurely disclosed,” prosecutors said in the brief.

The 38-page affidavit, released on Friday, asserted that there was “probable cause to believe that evidence of obstruction will be found at” Mr. Trump’s Mar-a-Lago compound, indicating that prosecutors had evidence suggesting efforts to impede the recovery of government documents.

Since the release of the search warrant, which listed three criminal laws as the foundation of the investigation, one — the Espionage Act — has received the most attention. Discussion has largely focused on the spectacle of the F.B.I. finding documents marked as highly classified and Mr. Trump’s questionable claims that he had declassified everything held at his residence.

But by some measures, the crime of obstruction is as, or even more, serious a threat to Mr. Trump or his close associates. The version investigators are using, known as Section 1519, is part of the Sarbanes-Oxley Act, a broad set of reforms enacted in 2002 after financial scandals at companies like Enron, Arthur Andersen and WorldCom.

The heavily redacted affidavit provides new details of the government’s efforts to retrieve and secure the material in Mr. Trump’s possession, highlighting how prosecutors may be pursuing a theory that the former president, his aides or both might have illegally obstructed an effort of well over a year to recover sensitive documents that do not belong to him.

To convict someone of obstruction, prosecutors need to prove two things: that a defendant knowingly concealed or destroyed documents, and that he did so to impede the official work of any federal agency or department. Section 1519’s maximum penalty is 20 years in prison, which is twice as long as the penalty under the Espionage Act.

Julie O’Sullivan, a Georgetown University law professor who specializes in white-collar crime, said the emerging timeline of the government’s repeatedly stymied attempts to retrieve all the documents, coupled with claims by Mr. Trump that he did nothing wrong because he had declassified all the documents in his possession, presented significant legal peril for him.

“He is making a mistake in believing that it matters whether it’s top secret or not,” she said. “He is essentially conceding that he knew he had them.” If so, she added, then not giving them back was “obstructing the return of these documents.”

The cloud of potential obstruction carries echoes of the Russia investigation led by the special counsel, Robert S. Mueller III. That inquiry ended up being as much about how Mr. Trump had sought to impede his work as it was about scrutinizing Russia’s efforts to manipulate the 2016 election and the nature of myriad Russian links to people associated with Mr. Trump’s campaign.

Explore Our Coverage of the Trump Investigations

In a coincidence, the Justice Department on Wednesday revealed a 2019 internal document commissioned by William P. Barr, then the attorney general, that laid out purported justifications for his pronouncement that Mr. Trump was cleared of obstruction suspicions, despite the episodes recounted in the Mueller report. This time, however, the Justice Department is not overseen by a Trump loyalist.

Because of the heavy redactions in the newly released affidavit, it remains unclear whether there is any other investigation or official agency effort that law enforcement officials think Mr. Trump or people in his circle might have obstructed in refusing to turn over the government documents. But at a minimum, it is clear that the government’s efforts to retrieve the records have repeatedly been impeded.

The timeline laid out in the redacted affidavit, which fills in several gaps in the public understanding, traces back to May 6, 2021. On that day, as The New York Times reported this week, the general counsel for the National Archives first reached out to Mr. Trump’s designated representatives to the agency and asked for the return of about two dozen boxes of missing documents.

But the effort was stonewalled for months. The affidavit said the agency “continued to make requests” for about seven months. Finally, in late December 2021, Mr. Trump’s camp told the agency that it could retrieve about 12 boxes of documents at Mar-a-Lago.

In January 2022, the National Archives picked up what turned out to be 15 such boxes. After discovering that haphazardly mixed in were 184 documents marked as classified — including what the affidavit described as extremely restricted ones containing information that could reveal confidential human intelligence sources and surveillance technology abilities — the agency made a criminal referral to the Justice Department on Feb. 9.

In the spring, the F.B.I. examined the boxes and opened an investigation into how the classified documents ended up at Mar-a-Lago and whether any more were still stored insecurely there. The inquiry also sought to “identify any person(s) who may have removed or retained classified information without authorization and/or in an unauthorized space,” the affidavit said.

Now both the National Archives and the Justice Department were trying to retrieve the remaining government documents, meaning there were two official efforts that could have been obstructed.

The affidavit is heavily redacted in its discussion of that period. But The Times has reported that the F.B.I. obtained a grand jury subpoena in May for any remaining files.

Also unsealed with the affidavit on Friday was an angry letter to the Justice Department from one of Mr. Trump’s lawyers, M. Evan Corcoran, sent that month. The substance of his letter was entirely focused on the question of classified information and did not address obstruction.

In June, Jay I. Bratt, the head of the Justice Department’s counterintelligence section, visited Mar-a-Lago to inspect a storage room and spoke with Mr. Trump’s lawyers about the documents problem. At least one of Mr. Trump’s lawyers is said to have signed a written statement asserting that to the best of their understanding, they had turned over the remaining classified material from the White House boxes, satisfying the subpoena.

But investigators came to believe that even more records remained at Mar-a-Lago. The details in the affidavit are redacted, but it disclosed that multiple witnesses have been cooperating with the F.B.I. In a separate filing, the department urged a judge not to disclose anything that might reveal their identities, lest they be harassed and intimidated.

Investigators have also sought information by other means. After Mr. Bratt and other officials visited Mar-a-Lago, prosecutors subpoenaed the Trump Organization for a copy of Mar-a-Lago’s surveillance tapes, a person with knowledge of the matter said. The company complied, turning over the tapes to the government. The Justice Department subsequently asked for more tapes.

The department decided to obtain a search warrant to go into Mar-a-Lago and seize any remaining government documents. But in doing so, officials made an important legal and strategic decision.

Even though the Justice Department thought of itself as “conducting a criminal investigation concerning the improper removal and storage of classified information in unauthorized spaces, as well as the unlawful concealment or removal of government records,” as the affidavit stated, officials effectively sidestepped the issue of whether the documents were classified.

Instead, as a basis for the search warrant, they cited three criminal laws for which prosecutors do not need to prove that a mishandled document was classified. The harshest was the obstruction statute.

The search was successful in finding and retrieving numerous remaining government documents, some of which were marked as highly classified, according to the F.B.I.’s inventory. The raid thus apparently brought an end to long-impeded official efforts by two agencies to retrieve the records — some containing sensitive national security information, some not.

If the Justice Department is considering charging Mr. Trump with obstruction, there is one missing piece of information in the public understanding of the events: whether there is proof that he personally knew the documents were at Mar-a-Lago and chose not to return them all, including after the subpoena.

News accounts attributed to people familiar with the matter have said he did know he had the documents and discussed whether he ought to return them with various advisers, including at one point declaring, “They’re mine.” But because the affidavit is redacted, it is not clear what court-admissible evidence investigators have gathered in this area.

Against that backdrop, Ms. O’Sullivan noted that most of the interactions between the government and Mr. Trump’s camp went through his lawyers. She said if Mr. Trump were charged with obstruction, his only defense would be to say he did not know what was still at Mar-a-Lago and that his lawyers and aides handling the documents matter had messed up or misled him.

“He would probably look to throw his lawyers under the bus and deny that he had the requisite knowledge that he was concealing them with the intent to obstruct the return of the documents,” she said. “That is what we don’t know yet because of the affidavit redactions — whether the Department of Justice has proof that he did know that they were still concealing documents on an ongoing basis.”