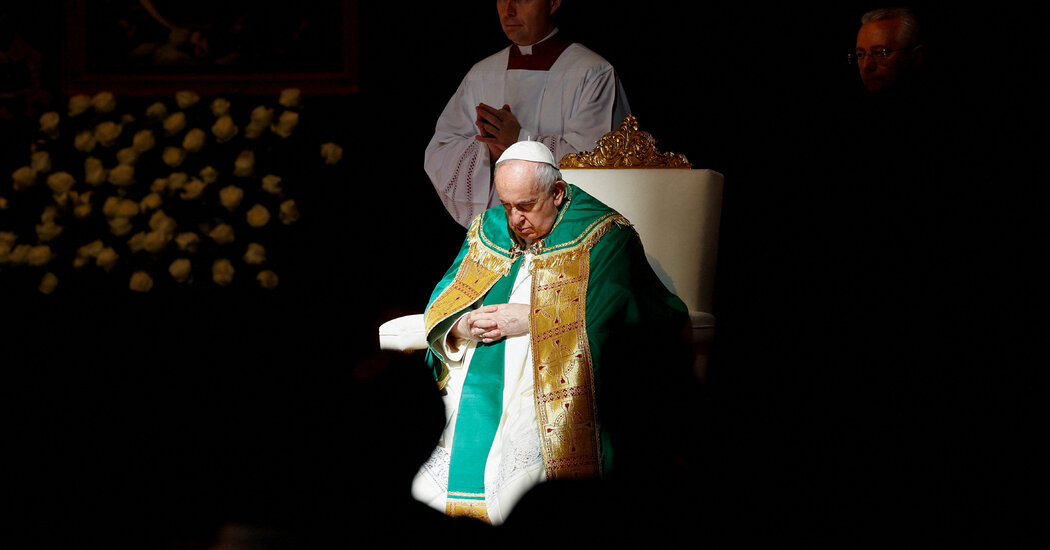 ROME — Over the last few weeks, close watchers of the Roman Catholic Church have carefully studied shadows on the Vatican walls for proof that Pope Francis is about to retire.

They pointed at an unexpected move to create new cardinals in August as a sign that Francis, 85, was stacking the college that will pick his successor before an early exit. They read deep into his planned visit to an Italian town with a connection to a medieval pope who called it quits. They saw the pope’s use of a wheelchair and his cancellation of a trip to Africa as evidence of his papacy’s premature ending, despite Vatican explanations about a healing right knee.

But in an interview published on Monday, Francis dispelled the rumors, calling the supposed evidence mere “coincidences” and telling Reuters that the idea of resignation “never entered my mind. For the moment no. For the moment, no. Really.”

The only shadow that seemed real then was the one cast by Francis’s predecessor, Pope Benedict XVI, who in 2013 became the first pontiff to retire in nearly 600 years. In doing so, he changed the nature, and perception, of the papacy from a lifetime mission assigned by the Holy Spirit to a more earthly calling, subject to political pressures, health assessments and considerations about the church’s best interests.

“Now it is much easier to envision a resignation because Benedict paved the way for that, and it changed our perception,” said Giovanna Chirri, a veteran Vatican reporter who broke the news of Benedict’s retirement when she understood the pope, to the shock of the cardinals around him, tender his resignation while speaking in Latin. “It is not like before.”

For all of Benedict’s struggles to leave a mark on the church, his papacy is often remembered for its public relations missteps and inconvenient revelations about dysfunction within the Vatican. But the German pontiff’s decision to quit transformed the office, creating pre-Benedict and post-Benedict eras when it comes to the expectations of how long popes will stay in power.

Francis is clearly living in the post-Benedict era, often leaving open the possibility of one day resigning if declining health made it impossible to run the church.

“But when the time comes that I see that I can’t do it, I will do it,” Francis said again of retirement in the Reuters interview. “And that was the great example of Pope Benedict. It was such a very good thing for the church. He told popes to stop in time. He is one of the greats, Benedict.”

In a 2009 visit to L’Aquila, which had been devastated by a recent earthquake, Benedict solemnly placed his pallium, the vestment symbolizing his papal authority, on the tomb of Celestine V. In 2010, he returned to nearby Sulmona, known for the sugar-covered almonds popular at Italian weddings and Vatican receptions, and again honored Celestine V as he prayed in front of his remains.

In 1294 Celestine issued a decree asserting the right of a pope to resign, and then acted on it. His successor imprisoned him, and he later died in jail. Dante then placed him in hell for “the great refusal.” Not surprisingly, no other pope took the Celestine name.

Benedict later told an interviewer that he wasn’t thinking at all about resigning when he visited the tomb, but it was front of mind in the church rumor mill when the Vatican announced Francis would celebrate Mass on Aug. 28 and open the “Holy Door” at the basilica hosting the tomb of Celestine, whose example Benedict ultimately followed.

Benedict got a giant send off, with an outpouring of adoration that mostly eluded him during his eight-year reign, and told the faithful that “to love the church means also to have the courage to make difficult, painful decisions, always putting the good of the church before oneself.” His conservative backers were not thrilled, especially when he promised to be “hidden from the world.” He entered retirement in the Vatican gardens, partly to avoid creating an alternate power center from Vatican City.

But over the next nine years, Benedict, who took the title “Pope Emeritus,” has at times been invoked favorably by traditionalist opponents of Francis and has emerged to cause headaches for his successor, including when a book written in his name firmly defended priestly celibacy as Francis weighed whether to lift the restriction on married priests in remote areas.

While Francis and Benedict, now 95 and exceedingly frail, have remained deeply respectful to one another, the implausibility of having a crowd of three popes, two retired and one in power, belied all the recent resignation rumors.

Francis is now the same age as Benedict when he quit, and aging has taken its toll on him in his near decade in the throne. His recent health challenges and dour expressions have fueled speculation of his bowing out, especially among enemies in the Vatican who hoped to see him go.

Last July, he underwent surgery to remove part of his colon. The operation kept him hospitalized for 10 days, though he later told a Spanish-language radio station that he had never thought about quitting.

The pope also has problems with sciatica, a chronic nerve condition that causes, back, hip and leg pain. Flare-ups have forced him to cancel or modify high-profile appearances, and, with his knee problems, have, at times, put him in a wheelchair.

Even supporters of Francis openly stated that his pontificate had entered its final phase.

“But even with the best prognosis, age is catching up to Francis,” the Rev. Thomas Reese, a Jesuit like Francis, wrote in Religion News Service at the time of his surgery. “We may look back at his hospitalization as the moment that marked the beginning of the end of his papacy.”

But in his interview with Reuters, conducted on July 2 in his Santa Marta residence in the Vatican, Francis walked, however precariously, with a cane.

“I have to start moving because there’s a danger of losing muscle tone if one doesn’t move,” he said. “It’s getting better” Once seated he was sharp and gregarious and made it clear he has much more to do.

He discounted other Vatican rumors (“court gossip”) about doctors having discovered cancer in an operation last year, (“they didn’t tell me anything about it”) and explained for the first time that he had suffered “a small fracture” in his right knee as a result of a misstep, and that his altered gait inflamed a ligament.

“I am slowly getting better,” he said, adding that he was undergoing laser and magnet therapy and avoided an operation because general anesthetic in last year’s colon surgery had given him bad side effects.

He said doctor’s orders about a “health risk” to his knee forced him to postpone the trip to South Sudan and Democratic Republic of Congo. The decision, he said, caused him “much suffering” but that it risked undoing all of his knee therapy.

He also expressed hopes to visit Moscow and then Kyiv soon after returning from Canada, which he is set to visit later this month. “The first thing is to go to Russia to try to help in some way,” he said. “But I would like to go to both capitals.”

And within the church, Francis is still hard at work at renewing the church after what he considers an erosion in the hierarchy. He is making significant changes to the Curia, the bureaucracy that runs the Vatican, seeking to modernize the liturgy and appoint new lay people and women to positions of authority.

“As long as he can coordinate the process that he started, he will want to do it,” said Ms. Chirri, adding, “If he has enough energy to govern, he will keep doing it for another 10 years.”