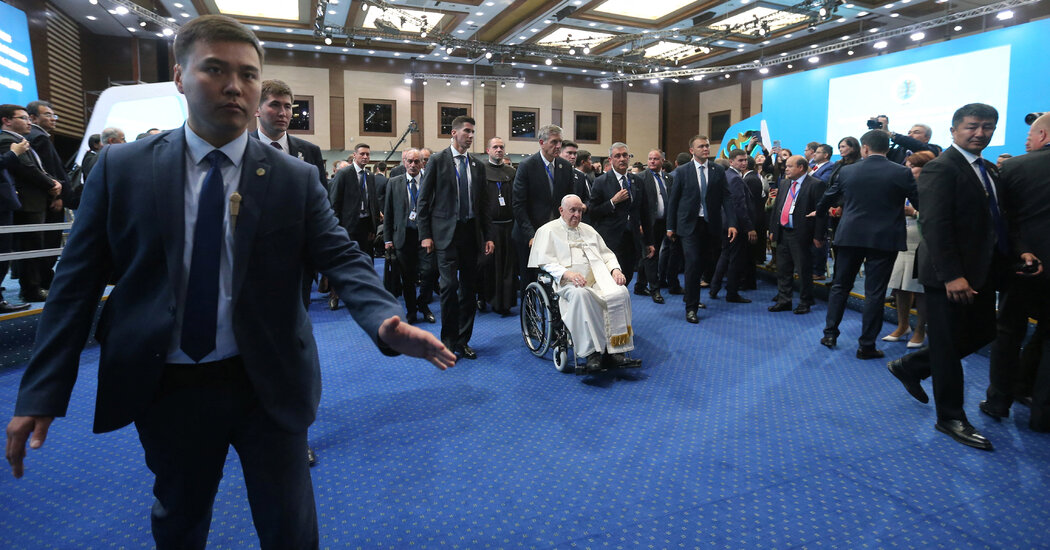 ROME — After Russia’s invasion of Ukraine, Pope Francis initially appeared to uphold the Vatican’s longstanding policy of not taking sides, before eventually changing tack and saying explicitly that Russia was the aggressor in the war.

Now, Francis has weighed in on a morally thorny issue, saying on Thursday that it is acceptable for countries to provide weapons to Ukraine so that the country can defend itself.

Self-defense in the face of aggression is “not only lawful but also an expression of love of country,” Francis said.

But he also stressed that communication channels with Russia should remain open even if, he said, dialogue with the aggressor “stinks,” because “otherwise we close off the only reasonable door to peace.”

Francis spoke to reporters onboard a plane returning from a three-day trip to Kazakhstan, where he participated in an interfaith conference attended by faith leaders from 60 countries. The meeting promoted interfaith dialogue as a means to help heal the world’s ills, including war.

Asked whether it was right for countries to supply weapons to Ukraine, Francis said that was “a political decision, which can be moral — morally acceptable — if it is done according to the conditions of morality.” It would be immoral, he said, “if it is done with the intention of provoking more war or selling weapons or discarding those weapons that are no longer needed.”

The pope made a reference to “just war,” a set of ethical principles regarding the proportional response to aggression, usually traced to the writings of St. Augustine.

The interfaith conference was supposed to provide an opportunity for Francis to meet with Patriarch Kirill, the head of the Russian Orthodox Church, who has justified the war in Ukraine. But Kirill decided last month not to attend and the Russian delegation was headed instead by Metropolitan Anthony, who is in charge of the church’s foreign relations.

The two religious leaders did speak by video in March, but Kirill spent a good part of that meeting reading prepared remarks that echoed the arguments of Russia’s president, Vladimir V. Putin. Francis told an Italian newspaper he had told Kirill that the men were not “clerics of the state” and said the patriarch could not be “Putin’s altar boy.”

In August, Ukrainian officials were dismayed when Francis referred to Daria Dugina, a 29-year-old Russian ultranationalist who spoke out in favor of the invasion of Ukraine, and was killed by a car bomb, as an “innocent” victim.

Afterward, Ukraine’s foreign minister summoned the Vatican’s ambassador to Ukraine to express “profound disappointment” in Francis’s words. It was after that meeting that the Pope explicitly blamed Russia in the conflict.