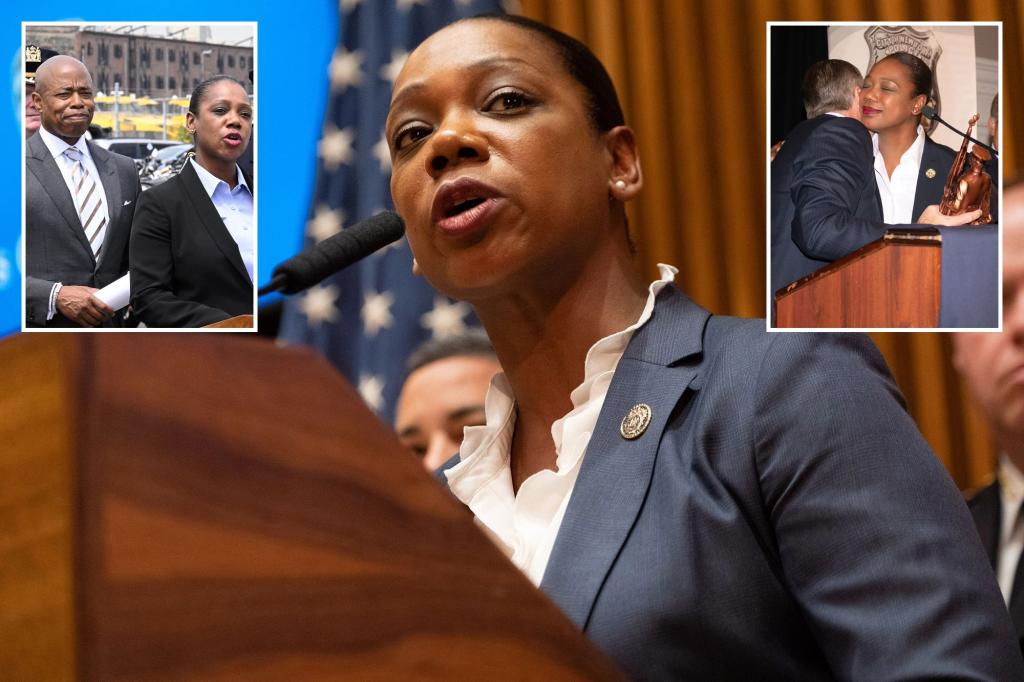 New York Police Commissioner Keechant Sewell is helping Mayor Eric Adams get a level of love from cop union leaders that would have been unthinkable while Bill de Blasio was still calling the shots in City Hall.

“She listens. She implements. And she actually cares about the cop on the street,” Patrick Lynch, the firebrand president of the Police Benevolent Association, gushed to The Post on Thursday after naming Sewell “Person of the Year” at the PBA’s annual convention in Albany.

The recognition for the NYPD commish comes at a politically fraught time for Adams, with rising crime fueling new fights over how best to balance civil rights with support for law enforcement officers trying to do their jobs.

But as his first year in office winds down, relations with the infamously combative PBA are no problem compared to the reception given to de Blasio in the first year that featured famous images of cops turning their backs on him at the funeral of two slain police officers.

“In the past. We were at the table but nobody was listening,” Lynch told The Post.

Previous winners of the award include ex-Govs. Andrew Cuomo and George Pataki, former Milwaukee County Sheriff David A. Clarke Jr., and two-time NYPD commish William Bratton while he was leading the LAPD in 2009.

A warm relationship between union leadership and the Adams administration was forged on Sewell’s first day on the job, said Lynch, when she personally responded after an off-duty cop in Manhattan was shot while napping in between shifts.

“Standing next to you in shock like us all but pushing through at our best when things are at their worst was our police commissioner and that’s why you’re our person of the year,” Lynch said while presenting the award to Sewell.

The first female honcho in NYPD history hardly followed a conventional path into the good graces of the union repping the rank-and-file in the most famous police department in the country.

A PBA press release cast her as a “virtuoso performer in law enforcement” who acquired experience in hostage negotiations, undercover work, and battling terrorism while rising in the Nassau County Police Department where she reach the rank of chief of detectives.

Sewell told union delegates that beat cops are not getting the love they deserve amid an ongoing spike in crime following the COVID-19 pandemic, controversial criminal justice reforms, and ongoing calls to defund the police.

“There are people throughout the city that want, need, and support you. I have met them. They are not always on Instagram, TikTok, or Twitter,” Sewell told a packed room of union delegates Thursday.

“I may not always get it right — but I believe in you,” she added.

A pre-recorded video appearance by Adams at the PBA convention highlighted how much relations have changed between City Hall and the union since the former NYPD captain took office alongside Sewell on Jan. 1.

“At the 128th annual convention of Police Benevolent Association, I’m proud to salute the great work of the NYPD and all our law enforcement professionals,” Adams said in the video.

Yet, amid the happy words, beer, and lunch at The Desmond Hotel near the Albany Airport were hints of dissatisfaction coming from the ranks, who the Adams administration recently ordered to spend less time socializing while walking their beats across the city.

“Maybe we should have a ‘no-congregating policy’ here too,” PBA First Vice President John Puglisi quipped while describing late-night carousing among union leaders the night before.