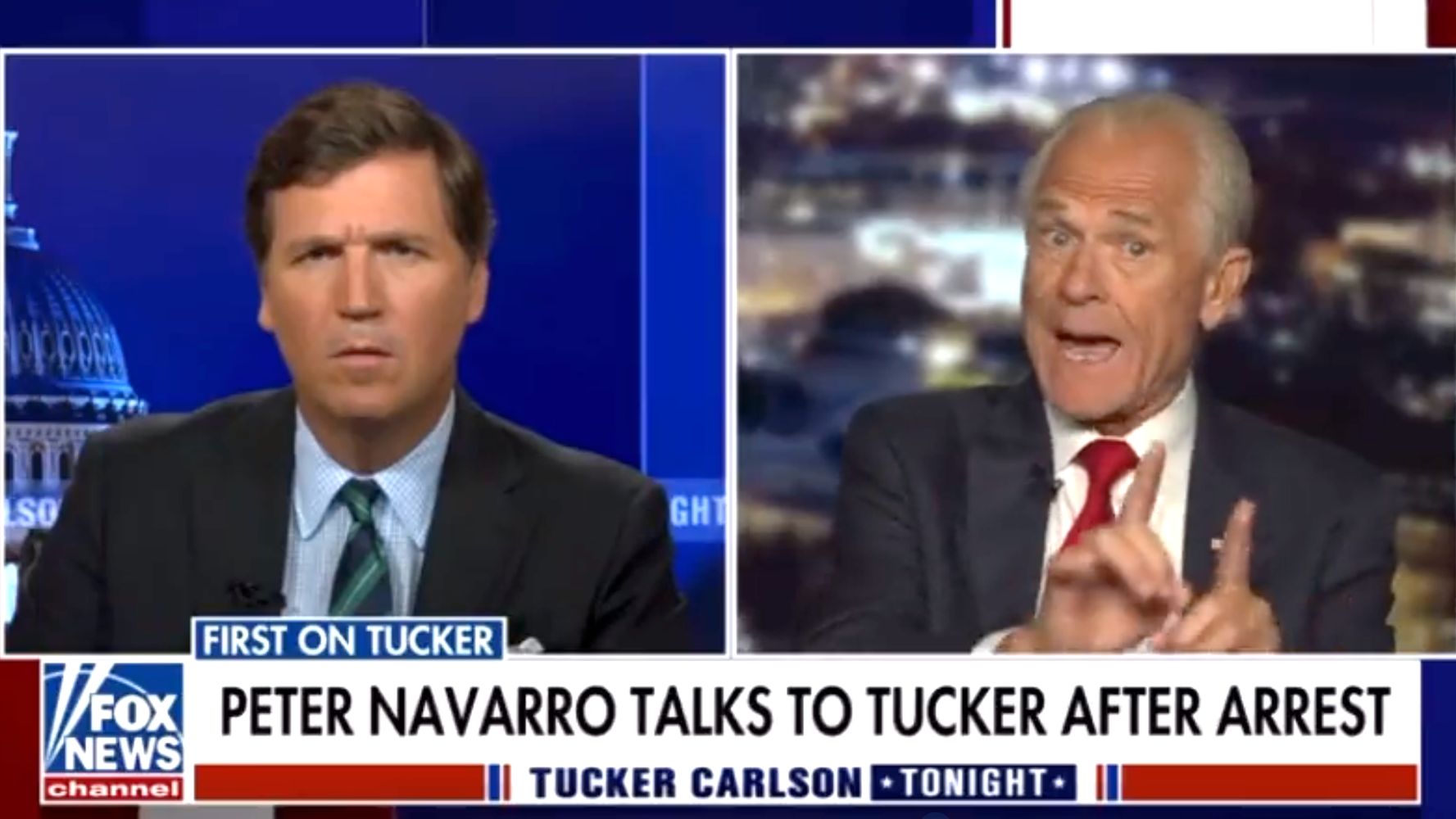 Peter Navarro, a top former White House adviser to Donald Trump, was up in arms Monday that he wasn’t given special treatment when he was arrested by the FBI last week for defying a subpoena issued by the House select committee investigating the January 6 U.S. Capitol attack.

During an appearance on “Tucker Carlson Tonight,” the former trade adviser claimed he was poorly treated during his brief time in custody on Friday.

“People do not want to sit in solitary confinement in leg irons ― denied food, denied water, denied an attorney,” Navarro said. “This is what we live in.”

Navarro appeared in court Friday afternoon before being released. He plans to represent himself, as a matter of principle, and because: “I do not want to spend several hundred thousand dollars on lawyers.”

Speaking to reporters outside the courthouse, Navarro claimed the Justice Department had an “utter disregard of the Constitution and the law” and that authorities could have knocked on his door at home and asked him to go to court instead of arresting him while he was about to board a plane.

Navarro was charged with two counts of criminal contempt of Congress for defying a subpoena issued in February demanding documents and testimony regarding the Capitol attack. He has claimed he was unable to cooperate due to executive privilege and said he would not do so until that privilege was waived by “the president” — referring to Trump, who can’t because he is not the president.

President Joe Biden has refused to grant executive privilege to those targeted by the committee probing the insurrection.

Navarro’s indictment marks the first time the Justice Department has pursued charges against a Trump administration official who was actively working in the White House on Jan. 6 and played a role in his crusade to overturn the 2020 election. Former White House adviser Steve Bannon was also indicted last fall for defying a subpoena.

Navarro was heavily involved in Trump’s scheme to stay in power and reportedly briefed Trump directly on debunked conspiracy theories about the election ahead of the Capitol attack.

His complaints on Fox News about his arrest raised eyebrows online:

If he followed the law to begin with he would not have been arrested.
Of course he was strip searched. Everyone is.
Food and water is on schedule. Not on demand. No lawyer is total bullshit.
This guy is a traitor and a crook, crying to an idiot.
America’s sh*t show on TV. https://t.co/87KyHBFyHF

Denied an attorney, food, water? For how long?

You have no right to a snack if you’re in custody for an hour. https://t.co/s4fLHd0j4L

I feel like if anyone has a right to complain, it’s the poor soul who was forced to do a *strip search* on *Peter Navarro*.

Navarro is still incredulous that he, an entitled old, rich white dude, was subjected to the laws that govern the rest of us. Reality, what a concept.