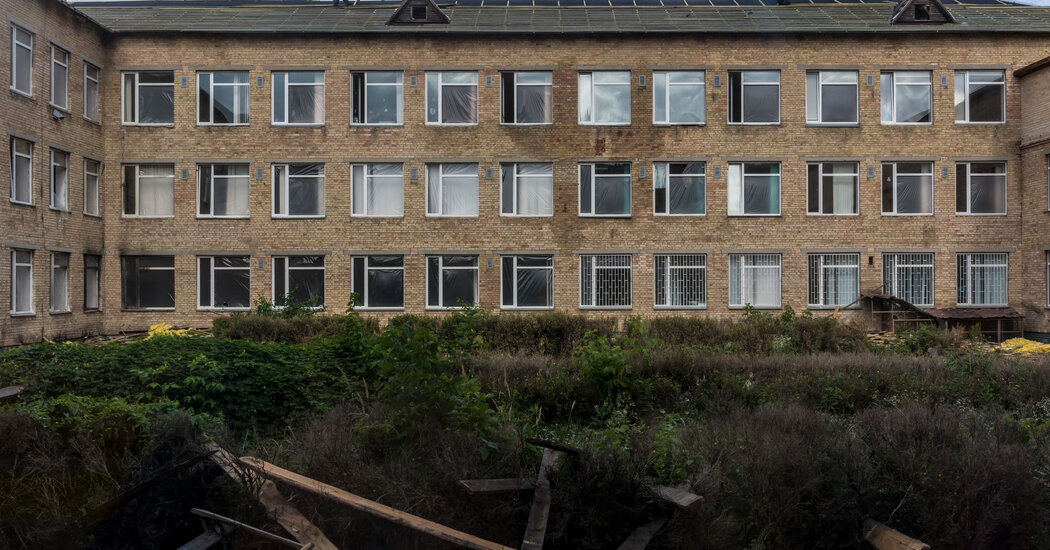 BUCHA, Ukraine — The bodies that littered the school playground in April are gone. The blood on the walls has been scrubbed clean and workers were working to repair shattered windows.

Still, School No. 3 in the Kyiv suburb of Bucha, the site of some of the worst Russian atrocities of the war, will not open when classes begin on Thursday for millions of Ukrainian children whose families are struggling to educate them.

That’s because the basement of the school was used by Russian soldiers as a torture chamber, residents said. It is still considered a crime scene, and in Ukraine — where the Education Ministry estimates Russian bombs, rockets and shelled have struck more than 2,400 schools, leveling at least 270 — no school can open without a bomb shelter.

For students like six-year-old Vera, who loves math and castles, that means remote learning. She had looked forward to the first day of school in Ukraine, when, as a new first grader, she would be hoisted on the shoulders of an older student to “ring the first bell,” to start the school year and kick off a day of celebrations.

“She does not want to start the school year taking classes online,” her mother, Lyudmila, as she took her daughter’s picture outside the school, holding the bell that she would not ring.

“It is a bleak and unwelcome experiment in childhood suffering,” James Elder, the spokesman for the United Nations Children’s Fund, said in an interview. “With thousands of schools damaged or destroyed, less than 60 percent are expected to open on time.”

The lack of a bomb shelter is just one of many challenges facing Ukraine’s schoolchildren and their teachers.

An estimated 2.8 million of the nation’s 6 million children have been forced from their homes because of the war. If they are fortunate enough to find a seat in a classroom, it will likely be in an unfamiliar town or city.

Another two million children are estimated to be living outside of Ukraine and will either log on remotely for schooling with Ukrainian teachers or try to integrate into new schools with classes taught in foreign tongues.

The challenges in government-controlled parts of Ukraine are daunting in their own right.

Teachers are receiving training in how to treat battlefield wounds and what to do in case they come across an unexploded ordnance. In addition to pens, paper and chalk, schools are being supplied with extra blankets, flashlights and first aid kits.

Unicef has reached around 1.7 million children and their caregivers offering psychological support. And they have dispatched 50 mobile teams to areas that are hard to reach because of the raging conflict.

“From Yemen to Syria, what we have learned is that children just absolutely need this psychological break from war,” Mr. Elder said. “And attending class plays a critical role in that.”

The fact that schools in Bucha and other hard-hit towns and cities across the country are opening at all is in many ways remarkable.

Anatolii Fedoruk, the mayor of Bucha, said that in the first days of the war, many families sought shelter in schools, thinking of them as places of refuge.

“They were wrong, they were not safe,” he said. During 32 days of Russian occupation, he said, schools were turned into firing positions and places of oppression.

He spoke outside School 5, where a tank had taken position in the schoolyard, the blackened walls of a high-rise apartment building across the street testimony to the violence.

Mr. Fedoruk credited the nonprofit Global Empowerment Mission and its founder, Michael Capponi, with providing the much needed assistance to get the town’s 15 schools rebuilt so that most could open on Sept. 1.

Mr. Capponi said it cost around $80,000 to repair this one school but it was about much more than the building itself.

The construction project — with all locally sourced materials — puts people to work, he said. School opening means food service returning and more jobs. It is a cycle that builds on itself. Most importantly, he said, it is an important step in reversing the refugee crisis.

“One of the most difficult questions for parents considering returning is whether their children can go to school in a safe environment,” he said. “This is not a full postwar rebuild, this is about getting kids in classes and parents back home.”