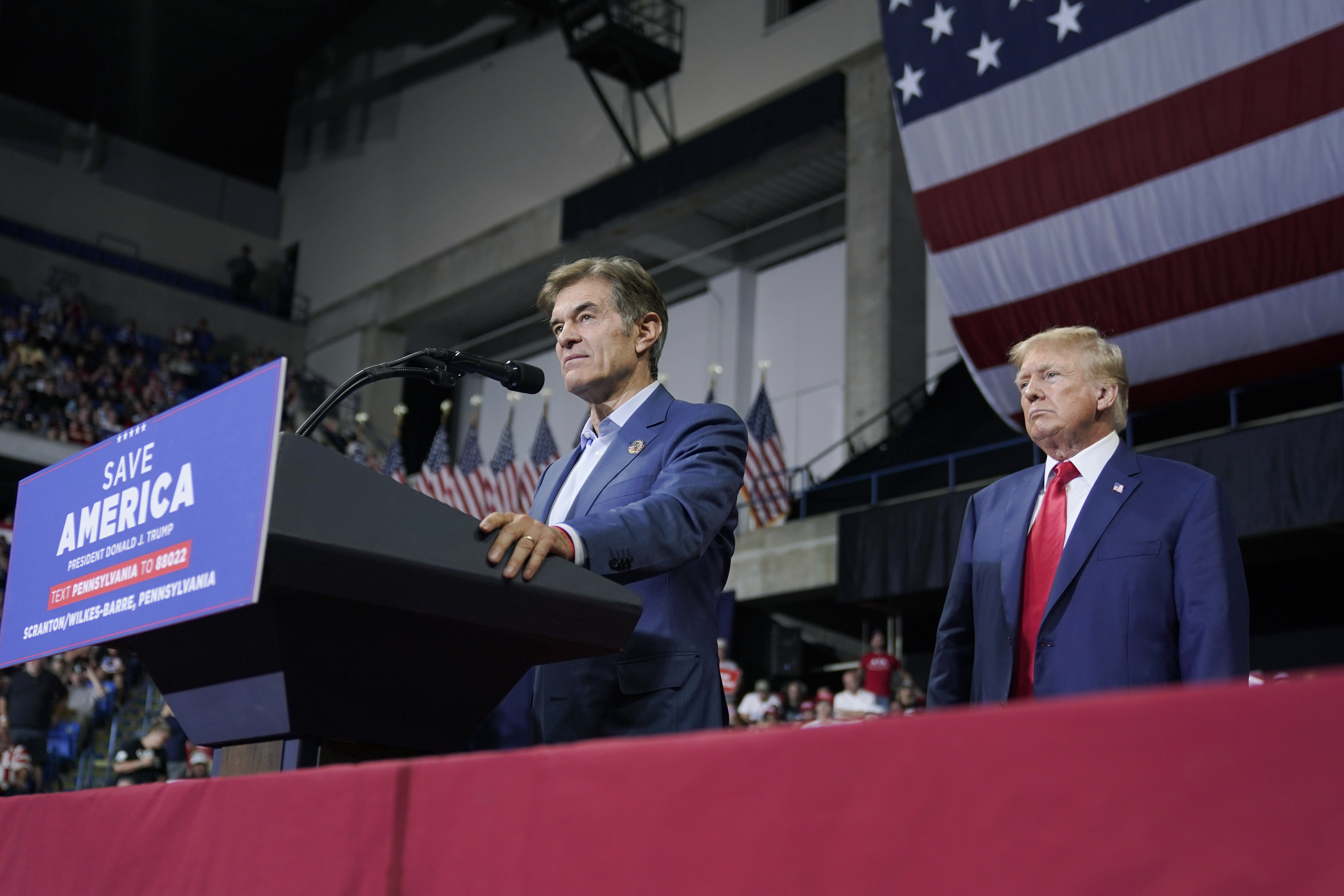 But interviews with a dozen voters at the rally, which also featured gubernatorial candidate Doug Mastriano and congressional hopeful Jim Bognet, revealed a complicated picture: Oz is making headway with the GOP base, and many Republicans are committed to voting for him even if they have to hold their nose. However, he is still struggling with an enthusiasm gap — and even far-right disinformation being spread about him.

“I’m 50-50 on him, personally,” said Dylan Smith, a student at northeastern Pennsylvania’s Bloomsburg University, arguing that Oz isn’t conservative enough on transgender issues and distanced himself from Trump during the general election. “He has removed Trump’s endorsement on his site. … So I’m iffy on him.”

When asked if he would ultimately vote for Oz over Democratic Senate nominee John Fetterman in November, however, he said he would do so, if unenthusiastically.

Oz has been struggling to unite the GOP base since winning the primary — which went to a recount — by fewer than 1,000 votes after a brutal, costly negative ad campaign that attacked him as a “Republican in name only.” In a recent poll by Susquehanna Polling and Research, Oz was supported by likely Republican voters 78 percent to 13 percent, compared to Fetterman, who was backed by Democrats 87 percent to 9 percent.

Some GOP voters at the rally were eager to cast a ballot for Oz despite not backing him in the primary. And at times, members of the audience stood up to applaud Oz as he spoke.

“Oz was not my first pick, but I’m definitely a supporter,” said Tony DelDonna, a solar installation company owner from Luzerne County, who said he voted for David McCormick in the GOP nomination contest. “I’m all behind Oz because Fetterman’s evil.”

Dave Resavage, a landscape designer also from Luzerne County, said he is “100 percent” sure that he and his family members will vote for Oz in November, though they are more excited about Mastriano, the face of the movement in Pennsylvania to overturn the 2020 election.

“At first, we were lukewarm to Dr. Oz, but he’s certainly better than the Fetterman choice,” he said. “He may not be our first choice, but that’s life like that.”

Dave Ball, chair of the Washington County Republican Party, said in a recent interview that GOP voters are warming to Oz: “The base is coming to him because he’s our candidate.”

It is clear that some Republicans still do not trust Oz, though. On at least two occasions, members of the audience called him a “RINO,” prompting pushback from a person in the stands who asked if they wanted Fetterman instead.

One rally-goer said there were “rumors” about Oz in the crowd, citing a baseless conspiracy theory that appeared linked to QAnon.

Both Oz and Mastriano used Trump’s rally to throw red meat to the base, though the Senate nominee seemed more focused on a general-election message that was also aimed at swing voters.

Oz spoke about the American dream, safe streets, and turning around the country, which he argued is headed in the wrong direction. “I’m the person for change,” he said.

Mastriano, on the other hand, talked almost entirely about issues that animate Republicans, such as voter ID, “sanctuary state” policies, and “critical race theory.”

Still, a number of their talking points overlapped, including lamenting border issues, critiquing Covid restrictions, and attacking the inclusion of transgender students in sports.

“I know without any question in my mind, we can have a secure border and allow legal immigration of people who work hard here and serve this great nation,” Oz said at the rally, while emphasizing that his parents immigrated to the country legally.

Mastriano said he would escort any buses of immigrants that arrived in Pennsylvania to “Joe Biden’s house in Delaware.”

Oz said that science had been “weaponized” with Covid-era shutdowns and lambasted the Green New Deal. Mastriano zeroed in on energy as well, promising that “on day one, we’re gonna … drill and dig like there’s no tomorrow.”

Trump criticized both Shapiro and Fetterman at length, arguing that they are soft on crime and that Mastriano as governor could limit the violence in Philadelphia with Oz’s help.

“Doug, you have to take care of this,” Trump said. “And Oz will send you the goods. Oz, send him the goods. You know what the goods are? Lots of police officers.”

Trump called Oz “an incredibly successful man on television and medicine” and said Mastriano “supported me right from the beginning.”

Ahead of the rally Saturday, Republican strategists said they were hopeful the event would help Oz shore up his standing with the base. Even Democratic consultants said it would likely benefit him.

“In some ways, this is a necessity for Oz because of the setbacks of the summer. He emerged from the primary with a fractured field and was fairly unpopular with the Trump base,” said J.J. Balaban, a Pennsylvania-based Democratic strategist. “It is just hard to see how he can win without an enthusiastic, united, motivated Republican base.”

At the same time, Balaban said, campaigning with Trump “will do him no favors with swing voters.”