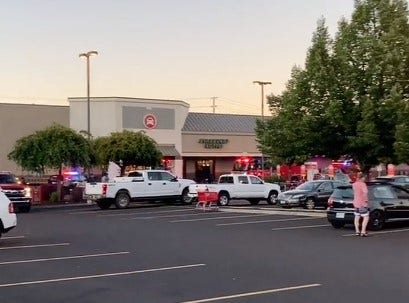 A father of four in Oregon detailed how he and his children escaped after a gunman entered an Oregon Safeway grocery store and started opening fire on Sunday.

At least two people were killed at the Safeway location in Bend, Oregon, during the Sunday shooting. Josh Caba was inside the store with his four children at the time, saying that his wife had chosen to stay in the car because she wasn’t feeling well, according to KTVZ-TV.

Caba entered the store with his kids, but one of the four was in a different section of the store when the shooting broke out. Caba says the gunman came in while his family was preparing to leave.

“We started heading to the front. Then we heard I don’t know how many shots out front – six or seven. I immediately turned to my children and said, ‘Run!’ People were screaming. … it was a horrifying experience,” he told the station.

Oregon police respond to a shooting at a Safeway grocery store.
(Twitter/@iamdavefelton)

Caba said he and three of his children fled to another section of the store and left through a side exit. He said his wife had anticipated the move “by the grace and provision of God” and had already pulled up the car to that exit, yelling, “Get in the car! Get in the car!”

Caba then went back into the store to get their fourth child, who safely made it to the vehicle just as police were rushing inside the store.

“When I got out of that store and the kids were rounded up, they [police] are running into the store,” Caba told KTVZ. “They are wonderful people. They deserve all the praise and credit in the world. It is absolutely more terrifying than you can imagine to have someone shooting at your kids. They are rock stars!”

Caba was one of several witnesses and bystanders who spoke with local media. Heather Thompson, who lives nearby the store, says she heard the initial shots and thought a car had backfired.

“And then less than a minute later there were 10-20 shots and then another 10-20 shots. I told my dad to get away from the window and there were people running out of Safeway,” she told KTVZ, adding that police arrived “in a matter of, like, 5 seconds.”

Molly Taroli was also inside the store when the shooting began. She told The Bulletin newspaper that she pulled her own handgun out of her purse as store employees tried to help shoppers exit safely.

Police say they found the suspect dead inside the store, with an AR-15 style rifle and a shotgun lying nearby. Two victims were killed in the attack, and one other is believed to have suffered injuries.

Police have yet to identify the suspect or any of the victims.