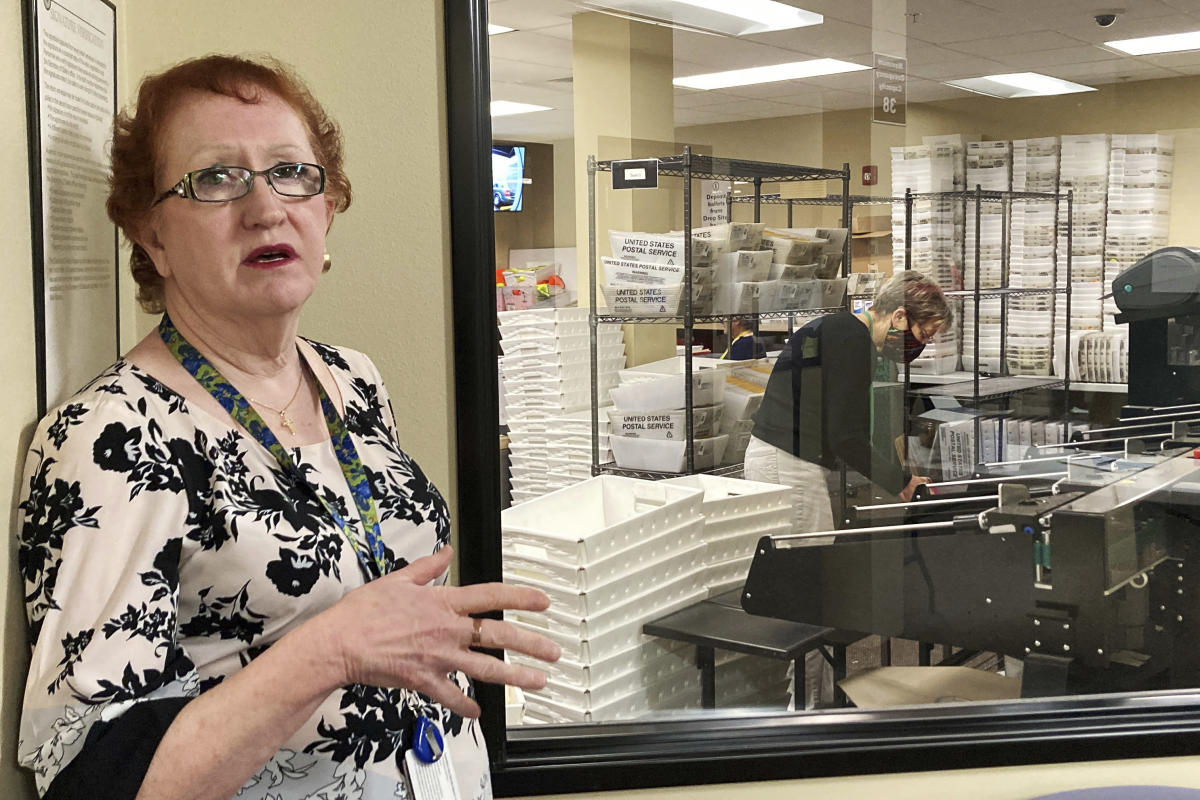 OREGON CITY, Ore. (AP) — Voters in an Oregon county where a ballot-printing error has delayed primary results for nearly two weeks have elected the same county clerk five times in the past 20 years despite missteps that impacted two previous elections and cost taxpayers at least $100,000.

Opponents have repeatedly tried to unseat Clackamas County Clerk Sherry Hall, who was first elected in 2002, following elections errors in 2004, 2010 and 2011 and a state vote-tampering investigation in 2012. Hall makes $112,600 a year in the nonpartisan position overseeing elections, recording property transactions, keeping public records and issuing marriage licenses. She is running for a sixth four-year term in November in the suburban county south of Portland.

The latest scandal in Oregon comes against the backdrop of a polarized political landscape in which vote counts are increasingly scrutinized. Races for local elections clerks — who until recently toiled in obscurity and relative anonymity — are getting new attention, particularly from right-wing voters who deny that President Joe Biden won the 2020 election.

Local elections chiefs are the first line of defense for elections integrity, but most voters don’t know who their county clerk is, or even what they do, and are likely to skip over the nonpartisan race on Election Day, or simply pick the incumbent. Some county clerks are appointed, but in many counties in Oregon and elsewhere they are beholden to the whims of voters who may not be paying attention, said Christopher McKnight Nichols, an associate professor of history at Oregon State University.

There’s a “myopia and invisibility about this sort of office in American public life,” he said.

The situation in Oregon’s third-largest county underscores the importance of such contests.

In the current election, tens of thousands of ballots sent out with blurry barcodes were rejected by a vote-counting machine. The issue affected Democratic and nonpartisan ballots more than Republican ones, state officials have said. The fiasco forced the county to shift nearly 200 county employees to vote tabulation duties; county officials don’t yet know the full cost of the cleanup job.

For days, workers have been transferring each voter’s intent from spoiled ballots to fresh ones, by hand using purple markers, in a painstaking process that might not be complete for more than two more weeks. More than 81,000 ballots out of more than 116,000 had been counted by early Friday, and nearly 35,000 spoiled ballots remained to be duplicated, according to county tallies.

“This affects all of us. This is voter integrity,” said Janet Bailey, a Republican voter who protested outside the Clackamas County election offices Thursday with about a dozen others. “We, in Oregon, a week ago we had our primary, and we still don’t know the results.”

Hall knew of the problem with the ballots on May 3, but did not take significant action until after the election on May 17, when it became clear the vote tally was substantially delayed. The Oregon Secretary of State has said Hall refused offers of help from the state; at least one Democratic state lawmaker has demanded a legislative inquiry into the ballot blunder.

Meanwhile, the results of several contests, including the much-watched Democratic primary for Oregon’s 5th Congressional District, remain undecided. And some voters are seizing on the county’s problems to demand an end to Oregon’s trailblazing vote-by-mail system and the use of electronic machinery to count votes.

“Our votes have to count,” said Cindy Hise, a Clackamas County voter who wants the entire primary redone. “This has been going on for days. We’re past all hope of it being a true vote.”

Hall declined a phone or in-person interview with The Associated Press for this story but said in response to emailed questions Thursday that she would cooperate with any investigation. She said she has no comment on calls from some for her resignation.

She also addressed numerous 2020 contributions she made to national Republican causes, saying in a brief email that she “maintains neutrality.” The donations to the National Republican Senatorial Committee and to WINRED, a Republican Party fundraising platform, were all $100 or less.

“I have the right as a private citizen to exercise free speech and association. I do give small contributions to a large number of organizations,” she wrote. “I do not accept endorsements of any kind.”

Controversy isn’t new to Hall, who has overseen the county’s elections since she took office in 2003.

— In 2004, the county excluded three annexation questions on ballots mailed to 300 voters and didn’t alert the public for 10 days.

— In 2010, a county commission race was listed on the primary ballot when it should not have been. The ballots were reprinted at a cost of more than $100,000. Hall later filed a complaint with state elections officials saying the episode, including press “leaks” and public criticisms of her by county officials, cost her primary votes and forced her into a November runoff.

— In 2012, an elections worker was caught tampering with two ballots and was sentenced to 90 days in jail.

— In 2018, Hall placed her name and the county clerk title on the ballot return envelopes and on voter information pamphlets while also seeking reelection to the post, a decision critics called egregious self-promotion in a tight race.

Hall said in her email that all the elections incidents “did happen under my watch” and that she or those in her office “took appropriate steps as needed.”

Pamela White, who challenged Hall in 2018 and lost by fewer than 6,000 votes, said even with such missteps it seemed impossible to defeat Hall. In that election, more than 52,000 voters skipped the county clerk race altogether despite persistent criticisms of Hall’s elections oversight and White’s endorsement by Hall’s recently retired elections manager.

“I worked very hard,” she said. “I knew what I was doing, but that down-ballot thing is an issue even in your own party. It just takes all the air out of the room.”

Steve Kindred, the former elections manager who endorsed White, said his relationship with Hall soured after a 2014 incident in which she asked him to do work on her reelection campaign during office hours without telling him what it was for. She was later fined $100 by state elections officials for the lapse. Kindred retired early.

Kindred said seeing the ballot fiasco now after experiencing the ballot-tampering probe in 2012 was like a “punch to the gut.”

“We had a couple of hell elections, not nearly as bad as this one,” he said. “It’s almost like she’s frozen, like a deer in the headlights.”

For now, the county is focused on getting the votes counted by June 13, the state’s election certification deadline.