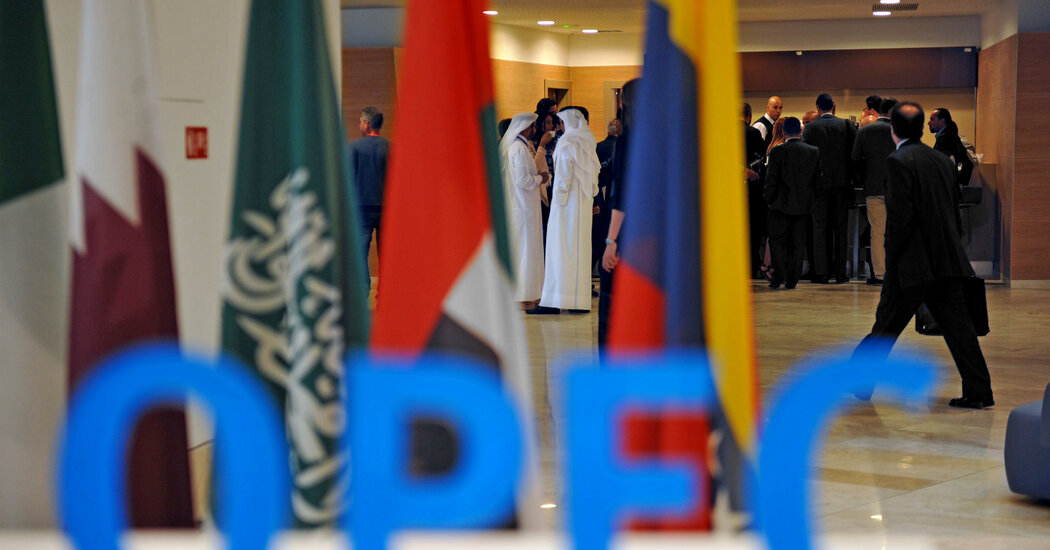 For more than two decades, Congress has been considering a bill that would allow the Justice Department to sue OPEC members for violating antitrust law by colluding to control the supply and price of oil.

Efforts to pass such legislation have been stymied largely by fear on the part of the United States. Fear that OPEC, in response, would impose an embargo on oil exports, as it did in the 1970s. Fear of “oil supply disruptions and an escalation in the price of gasoline, natural gas, home heating oil and other sources of energy,” as a statement from the administration of President George W. Bush put it in 2007 when he threatened to veto a similar measure. And fear that OPEC members would undermine the dollar by selling their oil in other currencies, as they threatened to do in 2019.

The world has changed over the past two decades, with the United States now the world’s biggest oil producer, thanks to its shale oil capacity, and the legislation is once again making its way through Congress. The most recent version of the bill, known as NOPEC, the No Oil Producing and Exporting Cartels Act, has been reported out of committees in the Senate and the House. It’s ready for a vote, and it’s finally time to pass it. Why now? There are two reasons.

One is Russia. Russia is an ally of OPEC, which consists of 13 oil-rich countries. The ability of the organization to raise oil prices in combination with Russia, one of the world’s leading producers, helps stoke Russia’s war machine. Breaking the cartel would help break Russia’s economy.

The other reason is high prices at the pump. Break the cartel, and oil output will increase. That means prices will go down.

Ever since OPEC was formed in 1960, industry observers have been concerned that coordination among major oil-producing countries will affect the markets for oil and other petroleum products in the same way that other cartels affect their markets, by restricting output and raising the price above the competitive level, harming consumers and benefiting producers.

These concerns have only grown. OPEC’s effectiveness declined for a time, but as more countries joined or allied themselves with the cartel, it has become more effective at controlling the output of what would otherwise have been competing oil producers. And let’s not be mollified by the news on Thursday that OPEC and its allies would increase the supply of oil for July and August beyond what it had planned, after lobbying from the White House.

For every other industry, U.S. antitrust law, from its very earliest days in the 19th century, condemned price-fixing cartels as per se illegal, lacking any justification. This condemnation has been applied to both domestic and international cartels. The Justice Department has prosecuted international cartels since the late 1930s and with particular vigor in the 21st century. Justice Antonin Scalia expressed the underlying policy view succinctly when he wrote for the Supreme Court in 2004 that collusion with regard to price is “the supreme evil of antitrust.”

What would this legislation do? Technically, the bill would address legal obstacles to suing OPEC members, their state-owned oil companies and other countries and private producers for participating in the oil cartel. For example, the law would make clear that OPEC and its oil companies could not use the Foreign Sovereign Immunities Act to block Justice Department litigation.

Only the Justice Department would be able to enforce the law, with discretion to prosecute OPEC criminally, seek a civil injunction to stop the cartel’s activities or do nothing.

The possibility of criminal liability — prison time for those directing the cartel and large fines for OPEC members and their state oil companies — would likely have a significant impact on cartel operations today. Failure to comply with any injunction could also mean contempt proceedings and stiff penalties. Oil ministers would likely think twice before meeting with those of competing countries and deciding on how much oil to produce and export to the United States. Without the cartel, individual interests and the laws of supply and demand would be in control. Producers would be free to pump more oil, increasing the supply and selling more while pushing down the price.

For a quarter-century, the Justice Department has had a successful record prosecuting international cartels and getting jurisdiction over foreign nationals. Federal judges have imposed fines on these companies and sentenced their employees to serve time in U.S. prisons. Over time, countries increasingly have embraced competition, engaged in their own law enforcement to disrupt international cartels and even accepted the imprisonment of their nationals in the United States.

This history leads us to believe that fears of OPEC retaliation are misplaced: Many OPEC members see the benefits of diversifying their economies and participating in international commerce beyond the production of oil. Economic retaliation would only set back those efforts. Even so, a White House spokeswoman recently expressed concerns about the “potential implications and unintended consequences” of the legislation.

Applying the antitrust laws to participants in the international oil cartel would be consistent with longstanding antitrust enforcement policy. It is difficult to see why, as an antitrust matter, oil should be treated any differently from potash, lysine, vitamins, airline transportation, computer chips, auto parts or any of the other international industries whose price-fixing activities faced U.S. antitrust litigation when American consumers and businesses were harmed.

It’s long past the time to make NOPEC the law.