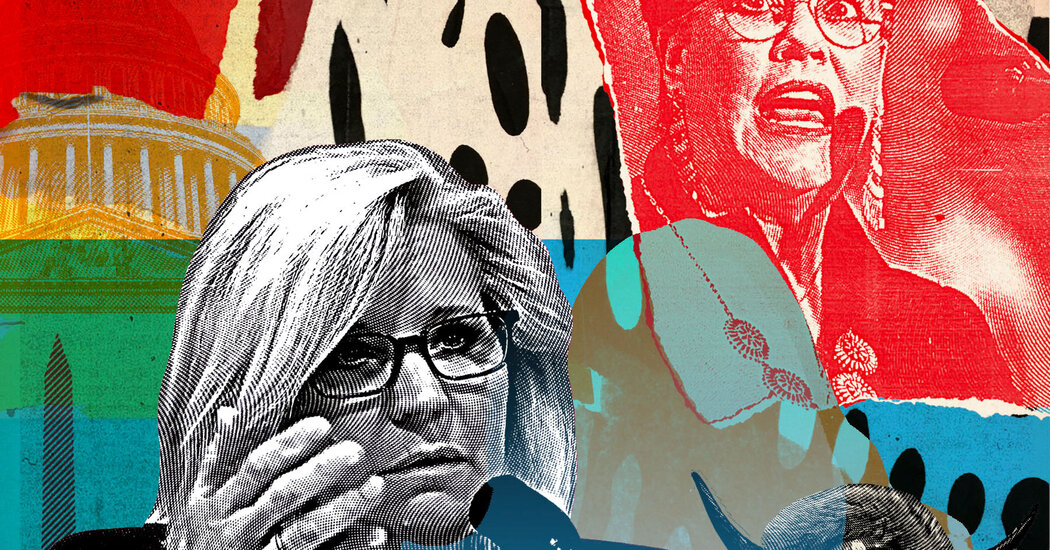 CASPER, Wyo. — On the same day in June that Representative Liz Cheney was making the case to the nation that Donald Trump was responsible for the Jan. 6 insurrection, members of the Natrona County Republican central committee crammed into a hotel conference room to debate whether Jan. 6 was a big deal at all.

One issue was a resolution calling for the resignation of Frank Eathorne, chairman of the state party. He was at the Capitol on Jan. 6 and had downplayed his participation in what he called a “peaceful rally.” But photos surfaced of Mr. Eathorne, a member of the far-right militia Oath Keepers, deep into restricted grounds, walkie-talkie in hand, grinning beneath the balustrade.

In another state, such a resolution might be a fait accompli. But Wyoming is the Trumpiest of places. A healthy number of those debating the resolution were deaf to the Jan. 6 hearings, disgusted by Ms. Cheney and confident the election was stolen. One attendee called the allegations a “poppycock liberal vendetta.” Many in this state view Ms. Cheney as a traitor for voting to impeach a president of her own party.

Seventy percent of Wyoming voters chose Mr. Trump in 2020, his highest share in any state. He has been good for Wyoming. We benefited handsomely from his administration’s energy policies. The mining industry is our lifeblood. It signs our paychecks; it funds our schools and paves our streets. There’s a joke that Wyoming is a two-party system: red and reddest, no Democrats allowed. Here, the primary is dispositive, and given that Mr. Trump has endorsed Ms. Cheney’s primary challenger, Harriet Hageman, it is a short leap across a dry bed to assume Ms. Cheney is toast.

But our state’s politics are more nuanced than Mr. Trump’s margins of victory suggest. Here, relationships and results matter. Ms. Cheney might hold onto her seat if she’s able to cobble together a coalition of forgotten moderates and crossover Democrats in the open primary just large enough to push her across the finish line.

Those quieter moderates — many of whom cannot stomach engaging with the bully extremists who often prominently display guns on their hips during party meetings — view Ms. Cheney as a champion, a courageous renegade who places country over party. The moderates speak less, but they vote.

When it came down to voting on the resolution aiming to force Mr. Eathorne out, for example, they carried the day. Even though the resolution has no teeth, the result was no aberration: Natrona County is the second-most populous county and its central committee’s vote may be a sign that an ideologically diverse electorate can still choose the winner.

In the 2018 Republican primary for governor, the moderate Mark Gordon defeated Mr. Trump’s candidate, Foster Friess, in part because of Mr. Gordon’s experience in the Republican Party during his time as state treasurer. The relationships Mr. Gordon built mattered. Work hard and do good work, and Wyomingites will turn out for you. Voters didn’t know Mr. Friess, a nonnative Republican megadonor from upscale Jackson Hole who threw his name in the hat less than four months before the primary.

Ms. Hageman, who came in third place in the governor’s race despite her Wyoming bona fides and a well-funded campaign, was a first time candidate for political office. She ran a shallow single-issue race, vowing to sue the federal government her first day in office. Her plans for the next day remained unclear.

Mr. Gordon’s win was not so much a victory for centrist conservatives (Mr. Gordon got 33 percent of the vote) as it was a reflection of vote splitting on the outer flank of the party. But Mr. Gordon might have benefited from crossover voters. From July to September 2018, a combination of Democrats and unaffiliated voters, 10,412 in all, changed their registration to Republican. In a primary race in which the winner took about 38,000 votes, this is an important demographic.

Moderate voters don’t just matter at the polls — they influence how the state is governed, propping up the big-tent leadership in the Legislature as it holds its finger in the dike of Republican Party extremism.

Ms. Cheney’s campaign is now unabashedly issuing Democrats and unaffiliated voters with step-by-step instructions on how to register as Republicans. It is a squishy electorate Ms. Cheney is banking on, a combination of crossover voters and moderate Republicans appalled by the testimony of the Jan. 6 committee.

It’s been a curious path we’ve walked with Ms. Cheney. In 2016, my husband, Tim, ran against her for Congress. We tried to paint her as an outsider who didn’t know the state. While we were once on the receiving end of her fierce campaigning, we are now supporters who see her as a lifeline to sanity. Perhaps she saw what I saw of Wyoming’s red-to-reddest spectrum. I’ve knocked on thousands of doors and shaken thousands of hands in Wyoming, and I see a nuanced electorate that judges the person, not the party.

There is an adage here that Wyoming is one small town with long streets. Translated, we know everyone. Six degrees of separation is a game for chumps. Here, it’s more like one degree. Those personal connections are meaningful and have generational depth. Recently we canvassed door to door for State Senator Drew Perkins. He is in a tight race with a challenger who marched on the Capitol on Jan. 6.

Most folks told me Drew had their vote. They knew him and they trusted him. They knew his mother. He’s been their representative for years. He works hard and has done good work. Red, redder or reddest, it did not matter.

We Westerners take rugged individualism seriously to the point of codifying a Code of the West. Chief among those principles are “Do what has to be done,” “Be tough, but fair,” and “When you make a promise, keep it.” And it is a personal case Ms. Cheney is making to her electorate: I will never betray the Constitution for my party. Choose me, not Donald Trump.

As a Wyomingite, I’m finding it both gratifying and terrifying to be in this pivotal moment in our country’s history. Ms. Cheney’s hope is that a quiet electorate will overcome the noisy hard-liners by registering its concerns the old-fashioned way: by voting. This may be the defining difference for Liz Cheney.