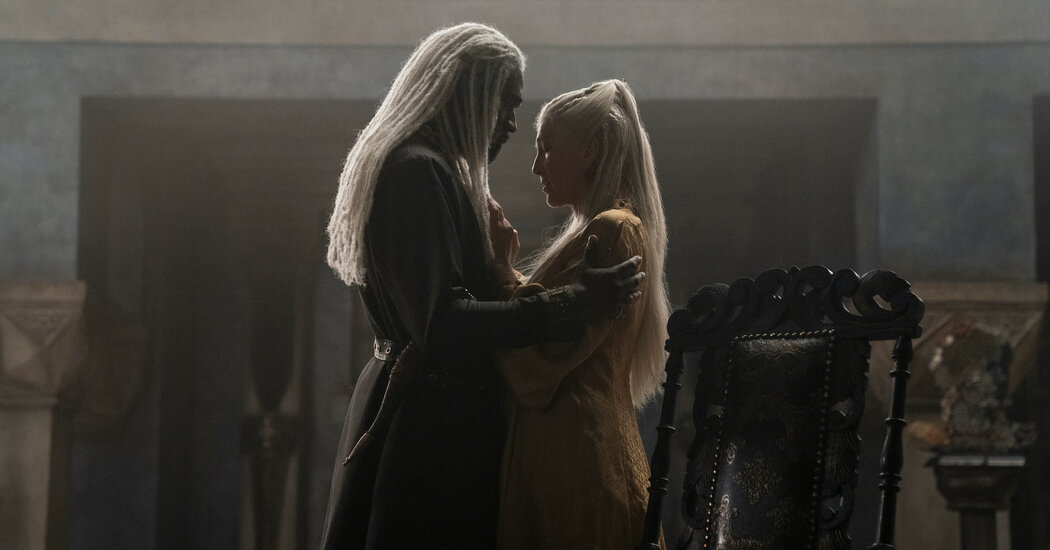 Of course, there weren’t ice zombies, giants or, ahem, dragons in Yorkish England either. Given that the land of Westeros is a wholly imagined fantasy, it could’ve been anything its creators imagined it to be — and in “Game of Thrones,” a white male author and white male showrunners imagined it as a place where people of color are mostly servile, silent or absent.

But as Mr. Sapochnik and Mr. Condal note, “House of the Dragon” arrives in a very different era. Mr. Condal put it bluntly in an interview with Entertainment Weekly: “It was very important for Miguel and I to create a show that was not another bunch of white people on the screen.” Mr. Sapochnik cited the #MeToo and Black Lives Matter movements in an interview with Jeremy Egner of The Times: “It’s a radically different world from what it was 10 years ago,” he said. “We have to reflect the changes in the world before us — not because somebody told us to, but because we actually feel like there’s a point.”

The conventions of casting have also seen a shake-up in the last decade. Since “Thrones,” high-profile period dramas such as “Bridgerton” and “The Great” have cast nonwhite actors as European royals and aristocrats — and become hugely popular. The same can be said of several exciting new shows in the fantasy genre. “Wheel of Time,” Amazon Prime’s adaptation of Robert Jordan’s best-selling novels, cast many of its main characters with Black, Asian, indigenous and Latin actors, and is now rolling toward its third season. The streamer’s even bigger bet, “The Rings of Power,” a billion-dollar prequel to J.R.R. Tolkien’s “Lord of the Rings,” has cast Black actors as hobbits and dwarves and Puerto Rican performers as elves, consciously defying the convention of depicting these nonhuman beings as white. And “The Sandman” — which reimagines white characters as Black and male characters as female, and cast a nonbinary actor whose gender identity is intrinsically necessary for their role in the plot — may well be the most watched streaming show on the planet right now.

All of these are evidence that embracing a full spectrum of talent options rather than rigidly adhering to historical inspiration doesn’t detract from storytelling or audience interest. Indeed, it’s very likely that more diverse casts have drawn new audiences to these fantasy tent poles, making them more relevant and accessible to viewers who have rarely seen themselves at the center of stories of such epic scale and grandeur.

That makes business sense: The consulting giant McKinsey and Company estimates that a more inclusive Hollywood could generate an additional $10 billion in annual revenues. A 2020 report commissioned by the top talent broker Creative Artists Agency showed that shows that premiered with at least a 40 percent nonwhite actors among their series regulars were significantly more in demand than those with less diverse casts.

And as for “House of the Dragon,” after setting an HBO audience record for a series premiere with 10 million live viewers and then topping that number with its second episode, it has been renewed for a second season. If its story continues to evolve in this direction, a fantasy many of us have had could come true: that female and nonwhite fans can delight in soaring dragons and palace intrigue without feeling burned in the process.