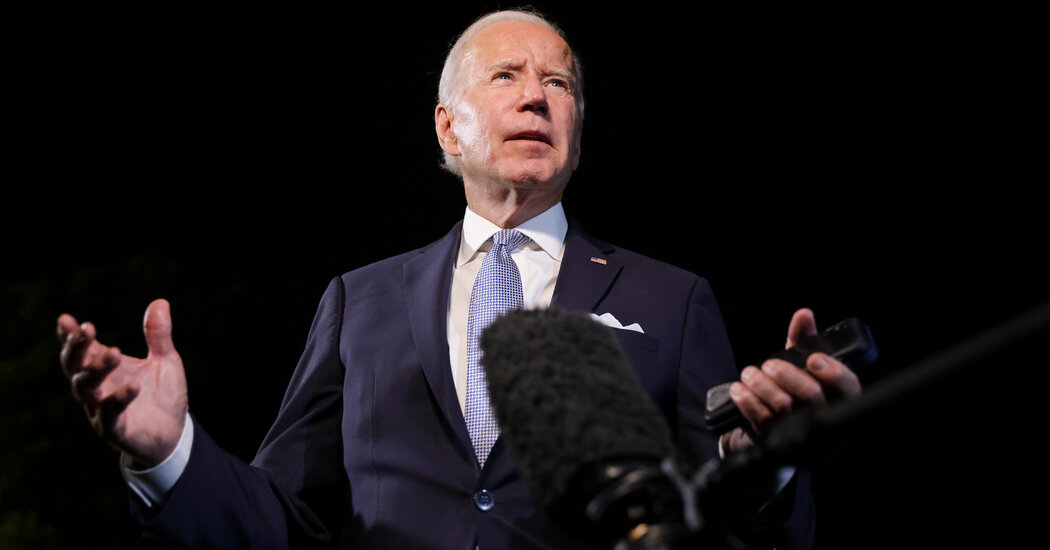 Strip away the weird semi-fascist optics, the creepy crimson lighting and the Marines standing sentinel, and the speech Joe Biden gave on Thursday night outside Philadelphia’s Independence Hall could have been given by other prominent Democrats throughout the Trump era.

The song is always the same: On the one hand, dire warnings about Trumpian authoritarianism and the need for all patriotic Republicans and independents to join the defense of American democracy; on the other, a strictly partisan agenda that offers few grounds for ideological truce, few real concessions to beliefs outside the liberal tent.

In this case, Biden’s speech conflated the refusal to accept election outcomes with opposition to abortion and same-sex marriage — implying that the positions of his own Catholic Church are part of a “MAGA Republican” threat to democracy itself — while touting a State of the Union‌-style list of policy achievements, a cascade of liberal self-praise.

The speech’s warning against eroding democratic norms was delivered a week after Biden’s semi-Caesarist announcement of a $500 billion student-loan forgiveness plan without consulting Congress. And it was immediately succeeded by the news that Democrats would be pouring millions in advertising into New Hampshire’s Republican Senate primary, in the hopes of making sure that the Trumpiest candidate wins — the latest example of liberal strategists deliberately elevating figures their party and president officially consider an existential threat to the ‌Republic.

The ultimate blame for nominating those unfit candidates lies with the G.O.P. electorate, not Democrats. But in the debate about the risks of Republican extremism, the debate the president just joined, it’s still important to judge the leaders of the Democratic Party by their behavior. You may believe that American democracy is threatened as at no other point since the Civil War, dear reader, but they do not. They are running a political operation in which the threat to democracy is leverage, used to keep swing voters onside without having to make difficult concessions to the center or the right.

It’s easy to imagine a Biden speech that offered such concessions without giving an inch in its critique of Donald Trump. The president could have acknowledged, for instance, that his own party has played some role in undermining faith in American elections, that the Republicans challenging the 2020 result were making a more dangerous use of tactics deployed by Democrats in 2004 and 2016.

Or his condemnations of political violence could have encompassed the worst of the May and June 2020 rioting, the recent wave of vandalism at crisis pregnancy centers or the assassination plot against Brett Kavanaugh as well as MAGA threats.

Or instead of trying to simply exploit the opportunities that the Supreme Court’s Dobbs decision has created for his party, he could have played the statesman, invoked his Catholic faith and moderate past, praised the sincerity of abortion opponents and called for a national compromise on abortion — a culture war truce, if you will, for the greater good of saving democracy itself.

You can make a case for Biden refusing these gestures (or a different set pegged to different nonliberal concerns). But that case requires private beliefs that diverge from Biden’s public statements: In particular, a belief that Trumpism is actually too weak to credibly threaten the democratic order and that it’s therefore safe to accept a small risk of, say, a Trump-instigated crisis around the vote count in 2024 if elevating Trumpists increases the odds of liberal victories overall.

For actual evidence supporting such a belief, I recommend reading Julian G. Waller’s essay “Authoritarianism Here?” in the spring 2022 issue of the journal American Affairs. Surveying the literature on so-called democratic backsliding toward authoritarianism around the world, Waller argues that the models almost always involve a popular leader and a dominant party winning sweeping majorities in multiple elections, gaining the ground required to entrench their position and capture cultural institutions, all the while claiming the mantle of practicality and common sense.

As you may note, this does not sound like a description of the current Republican Party — a minority coalition led by an unpopular chancer that consistently passes up opportunities to seize the political center, a party that enjoys structural advantages in the Senate and the Electoral College but consistently self-sabotages by nominating zany or incompetent candidates, a movement whose influence in most cultural institutions collapsed in the Trump era.

If Jan. 6 and its aftermath made it easier to imagine a Trumpian G.O.P. precipitating a constitutional crisis, they did not make it more imaginable that it could consolidate power thereafter, in the style of Turkey’s Recep Tayyip Erdogan or Venezuela’s Hugo Chávez or any other example. Which in turn makes it relatively safe for the Democratic Party to continue using crisis-of-democracy rhetoric instrumentally, and even tacitly boost Trump within the G.O.P., instead of making the moves toward conciliation and cultural truce that a real crisis would require.

Such is an implication, at least, of Waller’s analysis, and it’s my own longstanding read on Trumpism as well.

That reading may well be too sanguine. But in their hearts, Joe Biden and the leaders of his party clearly think I’m right.