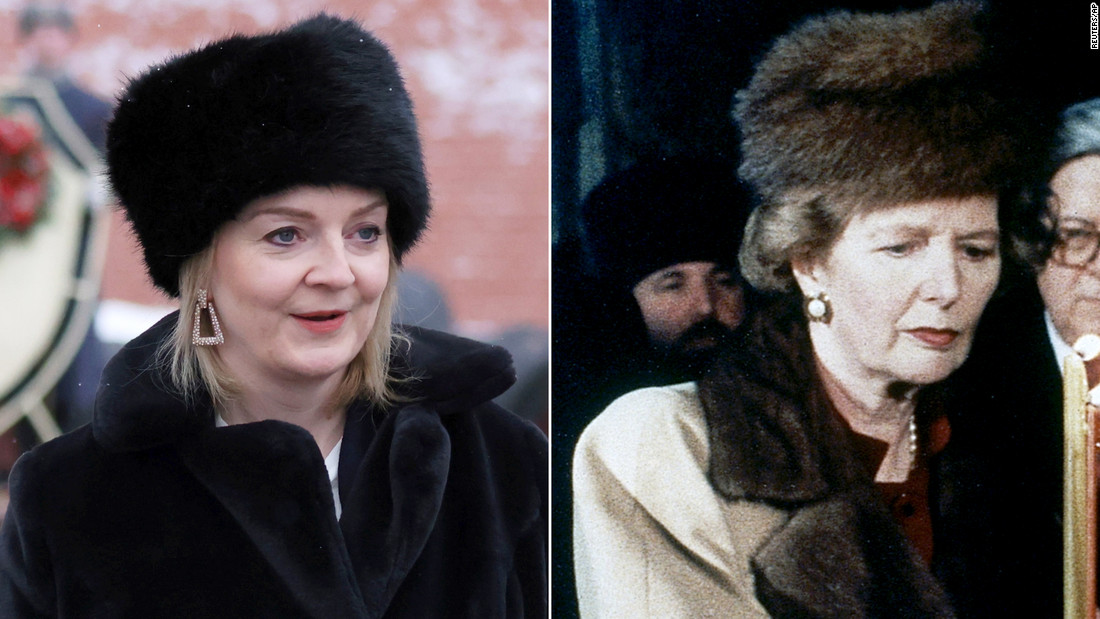 Both candidates in the contest to succeed Boris Johnson as leader of the Conservative Party, and by default become prime minister of the United Kingdom, have sought to hug the Iron Lady close.
Former foreign secretary Liz Truss and former chancellor Rishi Sunak each claimed the woman they hope to follow into 10 Downing Street would have favored her or his prescription for the country (safe in the knowledge there was now no earthly way she could contradict them, having passed away in 2013).
On Monday Truss was declared the victor; she becomes leader of the Conservative Party immediately but must wait another day to be flown in to kiss hands with the Queen at the monarch’s summer residence in Balmoral, Scotland, before she officially becomes prime minister.
In 2022, it is as if the country itself is twisting into a shape Thatcher would recognize. The supporting characters are all playing their parts: union leaders souring industrial relations, Russia sowing discord and inflation spiraling to a degree not seen since the 1970s.

There can be no denying that this new prime minister inherits a set of political circumstances more akin to those in play when Thatcher first came to office in 1979 than that facing anyone else who entered Number 10 in the intervening years.

Of the two candidates, it has been Truss who has hugged Thatcher the closest. During her 12 months as foreign secretary she flooded social media with much-mocked images in which she aped the Thatcher style, striking a nearly-identical pose in an imposing fur hat and donning her famous pussy-bow blouses.
This affinity with the UK’s first female prime minister means that as she prepares to be crowned the third, it is not trite to make comparisons between the pair, as it was with the second, Theresa May, who always rejected such analysis as “lazy.”

And so two questions naturally arise: once in office, will Truss really seek to introduce Thatcherism Part Two? And if so, how far will the prescription doled out more than four decades ago be successful in solving the problems, however similar, of 2022?

The second question may require several economics degrees and a crystal ball to resolve; but there are plenty of clues in Truss’s background and career to date to make a stab at the first.

Born in July 1975 in Oxford, to a professor of mathematics and a nurse, like Thatcher, Truss was an original thinker from a young age, but unlike her heroine did not pursue the politics of her parents.

Both the senior Trusses were on the far left of the spectrum, and her mother, Priscilla, once took her to a protest march at Greenham Common in the English countryside, where Thatcher controversially gave her friend US President Ronald Reagan permission to site American nukes.

Truss has said that while her mother would likely vote for her now, she would struggle to win the support of her father, John.

Thatcher learned the values of thrift, self-sufficiency and living within ones means at the knee of her father, a grocer and alderman. Truss came to prize such attributes via a more circuitous route.

At Thatcher’s alma mater of Oxford, where she studied philosophy, politics and economics (Thatcher pursued a more practical chemistry degree), Truss was president of the university’s Liberal Democrat club, a party then as now on the soft center of politics.

That meant that in the mid-1990s, Truss was espousing policies which would have made Thatcher wince, including the legalization of cannabis and abolition of the monarchy.

But not long after graduation, while working as an accountant for the oil giant Shell, Truss moved to the right, going on to meet her husband, Hugh O’Leary, at a Conservative conference. The couple went on to have two daughters.

Truss entered Parliament a few years later on the heels of a very un-Thatcherite scandale: an affair with a Conservative MP which led her local Conservative association to consider jettisoning her as a candidate on the grounds she had not appraised them of the relationship during the selection. (She later apologized to the association for the affair, saying it was a “mistake” and “water under the bridge”).

Her career survived, as did her marriage, and she made steady progress up the ranks.

Like Thatcher, Truss found it expedient to support British membership of the European Union until the sands shifted and she didn’t. Both campaigned on the Remain side of a referendum, Thatcher in 1975 and Truss in 2016, only to emerge as fervent Europhobes.
Unlike Thatcher, Truss was not a leader in her conversion to Euroskepticism, moving long after peers such as Boris Johnson and former Conservative leadership candidate Michael Gove had made the jump, but it was perhaps a similar journey: she had seen the EU at work and felt it was no longer a good fit for modern Britain.
In Johnson’s Cabinet and then as a leadership contender, Truss raised eyebrows with her by now decidedly Thatcherite conviction that the solution to the country’s economic problems was not handouts but tax cuts — letting the public keep more of their own money and trusting them to know what best to do with it.

She had become an ideologue after such things had gone out of fashion — a conviction politician when all around were now pragmatists.

But what is perhaps most striking is not so much the similarity of Truss and Thatcher’s views — the medicine they believe a sick Britain must swallow to cure the public finances (and only time will tell if the patient’s recovery is swift) — as it is the determination with which they hold those views.

That Truss can and has changed her mind is clear. But like Thatcher, she does so on her own terms: she will not be browbeaten or bullied off course, resisting all pressure to promise to splash the public’s cash over the cost of living emergency fueled by the energy crisis.
Like the ghost of Thatcher past, it is clear this lady too is not for turning.