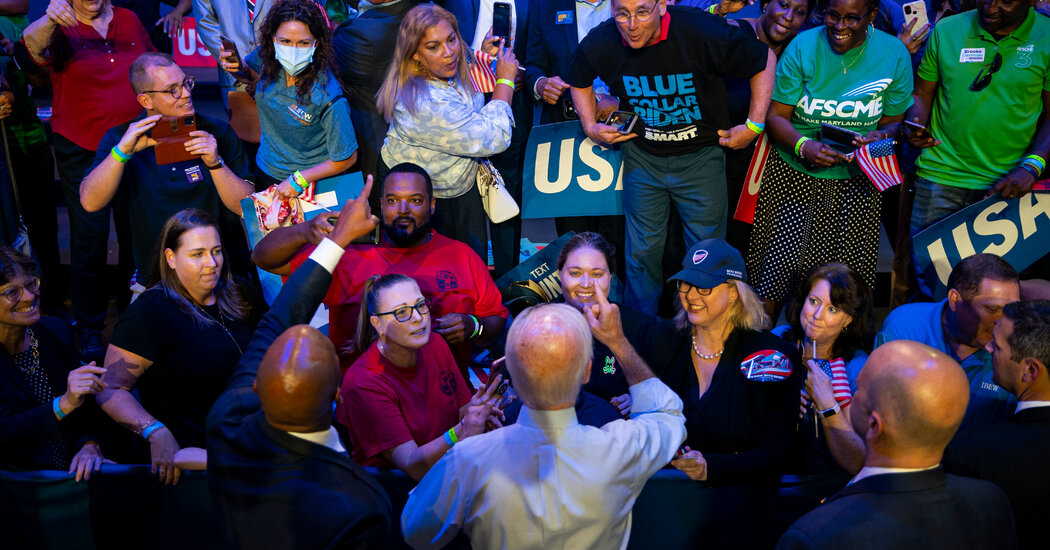 The coattail effect in politics is the theory that the popularity of a candidate at the top of the ticket redounds to the benefit of those in the same party down ballot.

But what do we call it when the person from whom the benefit flows is not actually on the ballot? What if the person isn’t even personally that popular?

That is what I believe is happening with President Biden at the moment. With a string of successes, he is building momentum and shaking off narratives of ineffectiveness.

Last week he announced that the federal government would forgive billions of dollars of student loan debt. Republicans predictably squawked about it being an unfair giveaway. Progressives complained that the plan didn’t go far enough.

But Biden did act. He did fulfill his campaign promise, to a degree. That is crucial. After some major losses — on liberal priorities like voter protections and police reform — voters needed more wins. It wasn’t Biden’s fault that his agenda was blocked. For that, the blame goes to obstructionist Republicans and demi-Democrats like Joe Manchin and Kyrsten Sinema.

There was, however, a sense setting in that electing an elderly institutionalist meant that he wasn’t filled with enough fight, that he was guided by a sort of geriatric gentility.

Biden’s recent wins put a major dent in those perceptions and are changing how people feel about him. According to FiveThirtyEight’s poll of polls, his approval rating, while still underwater, has been trending up for the past month. This week it reached 44 percent, the highest it has been in a year.

It is the direction of the line that is most important in politics. And I believe that Biden’s reversal will bode well for other Democrats.

Some of what is helping Biden is not his success but that of Republicans. The overturning of Roe v. Wade was monumental and is still stuck in voters’ minds. Many feel they are stuck in a nightmare and Democrats hold the only possibility of salvation.

This decision, this victory by the forced-birth zealots, wiped out the progress Republicans were making by pushing the anti-wokeness canard — this idea that they had to fight back against racial indoctrination, against people who would redefine what a woman is and against health regulation.

Also, Trump has resurfaced as a foil.

The stench around him grows stronger as investigations intensify and damning revelations continue to emerge. They may not alter the fealty of his followers, but they remind the rest of us of the horror we escaped by ejecting him from office and how desperately we don’t want to return to it.

In fact, the re-emergence of Trump as a constant, prominent feature of national news is probably one of the greatest assets Democrats have going into the midterms. Time has a way of softening the perception of ex-presidents.

George W. Bush went from the man who led the charge on the Iraq war, established the detention camp at Guantánamo Bay and defended torture to the man who laughed a lot, painted portraits and passed Michelle Obama candy at funerals.

But Trump refuses to exit the battle. And with every revelation of legal jeopardy and suspicious movement, he hinders any possibility of rehabilitation.

None of this is to say that Democrats have a lock on the midterm elections or that they will not suffer losses, as the ruling party historically has. There are still headwinds. Violent crime and inflation loom large in voters’ minds because they have risen to rates that some areas haven’t seen in decades. People blame Biden for that. It’s not in his control, but it’s on his watch. That’s just the way politics works.

However, Biden keeps adding other things to the other side of the ledger, and on balance, he and the Democrats keep looking stronger.

There are some Democrats nervous about campaigning with Biden because of his poor approval numbers, particularly in competitive districts. But Biden and his successes are the best things Democrats have right now.

They should probably take a note from Charlie Crist, who just won the Democratic primary in Florida to challenge the incumbent governor, Ron DeSantis.

When Crist was asked last week on CNN if he wanted Biden to campaign with him, he responded in part by saying of Biden: “He’s a good man. He’s a great man. He’s a great president. I can’t wait for him to get down here. I need his help. I want his help.”

Whether other Democrats want Biden’s help or not, I believe that they are going to need it. Running away from the leader of your party is never a good idea. It’s a particularly terrible idea when that leader is on a hot streak.